If you live in Thurston County, odds are you’ve driven through the Lacey Depot District, probably without realizing that is what it’s called. Think Saint Martin’s University, the historic train depot on Pacific Avenue and Pope John Paul High School.

Now, the City of Lacey wants your input on the future direction of that district. “We’ve had a couple of exciting projects come online in both public and private investment,” says Ryan Andrews, planning manager for the city’s Community and Economic Development Department. “We want the community to help us define and hone in on what people like about the district.”

The Depot District will be the focus of a three-day event, open to the public. Hosted at the “Big Yellow Warehouse” at 5700 Lacey Blvd., the city invites your comments and input on what you would like to see for the future of this area.

Pour over the proposed plans, give your feedback about what would make this community space better, share your thoughts on pedestrian and bike access and safety. All of these opportunities will be presented in three days of casual, informative events where all are invited. Grab a neighbor and swing by the “Big Yellow Warehouse” and help shape the future of this vibrant area.

From February 26 – 28, the city will hold ‘Studio Hours’- a time for viewing plans, asking questions and completing surveys with your input – from 2:00 p.m. to 5:00 p.m. on Monday and from 9:00 a.m. to 5:00 p.m. on Tuesday and Wednesday. “People can come and see what the city is going to be doing and talk with consultants about what they’d like to see moving forward,” says Andrews.

Studio Hours will be followed by a presentations and interactive sessions on Monday and Wednesday from 6:30 p.m. to 8:30 p.m. On Tuesday, February 27, join the team for a Walking and Biking Discussion from 6:00 p.m. to 8:00 p.m. to help shape spaces that honor and encourage pedestrians and bikers in the Lacey core. All events will be held at 5700 Lacey Blvd SE. 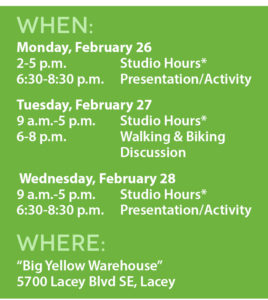 Studio Cascade, an award-winning community planning and design firm based in Spokane, will be on-site to give the big picture for the project and dive into the minute details that matter to Lacey citizens. “In the evenings, we’ll break out into smaller groups,” explains Andrews. “The final night, the consultants will present what they’re thinking based on synthesizing the input they’ve received over the three days. It’s a way to get a lot of public input and create an accelerated plan in a three-day window.”

The opportunity to give your opinions and ideas on how Lacey’s Depot District can be enhanced, then hearing your ideas incorporated into real plans just a few days later is exciting for city planners and citizens alike.

And, everyone is invited. “We want property owners, people who live in the area, local businesses, parents and students from schools like Pope John Paul High School to come tell us what they want,” shares Andrews. The area is used heavily by nearly everyone in Lacey and those accessing Saint Martin’s campus and the many schools in the area will have an even bigger stake in the project. Fire District 3 has their headquarters in the heart of the area as well.

The city is excited about the possibilities for the planning phase. The former Albertsons store at the corner of Carpenter Rd. and Pacific Ave. has been vacant since 2016. Now, the site will be developed in a multi-million-dollar mixed-use project with ground floor of commercial space topped by three stories of senior apartments. The project will have 9,000 square feet of retail space and 300 apartments.

At the site of the former train depot, an existing warehouse building will be converted into the new Lacey Museum, a hub for history buffs, school children, and visitors. There will also be a replica of the depot built on the same property.

Studio Cascade’s extensive experience with public planning ensures the events will not only capture public sentiment, but report it back to city planners effectively and quickly. “They’re going to take a high-level look at the area and help us hone the ideas that will be integrated into the plan,” says Andrews.

Prime Locations, a Lacey-based commercial real estate firm, will help with market assessment for redevelopment. The company has worked frequently with the city on projects like Woodland Square, Lacey Downs and Lacey Town Square. “We’ve been involved in so many of these projects,” says broker Joni Baker. “The city will ask us what the market looks like for an area. We start with development costs and work backward to look at what the market can bear.”

With Woodland Square, for example, the existing buildings could be used for office space, retail or mixed use. The Depot district is more complex, she notes, and while many of the sites within the district are somewhat industrial, Baker is hopeful the planning events will help shape the spaces creatively to reflect what the community wants.

And, what does the community want? That’s the whole point of the public events. A sincere desire to develop Lacey as it grows, meeting the needs of the community – public, private, and government – is at the heart of this project. For the best outcome on making Lacey the best it can be, the planners have turned to the number one asset Lacey has – it’s citizens.

Join the conversation and help shape your community on February 26 – 28. And, in a few years, when you tour the museum or shop in a newly developed retail space you can say, “I helped build this.”

Learn more about the Lacey Depot District plan and the upcoming events online.