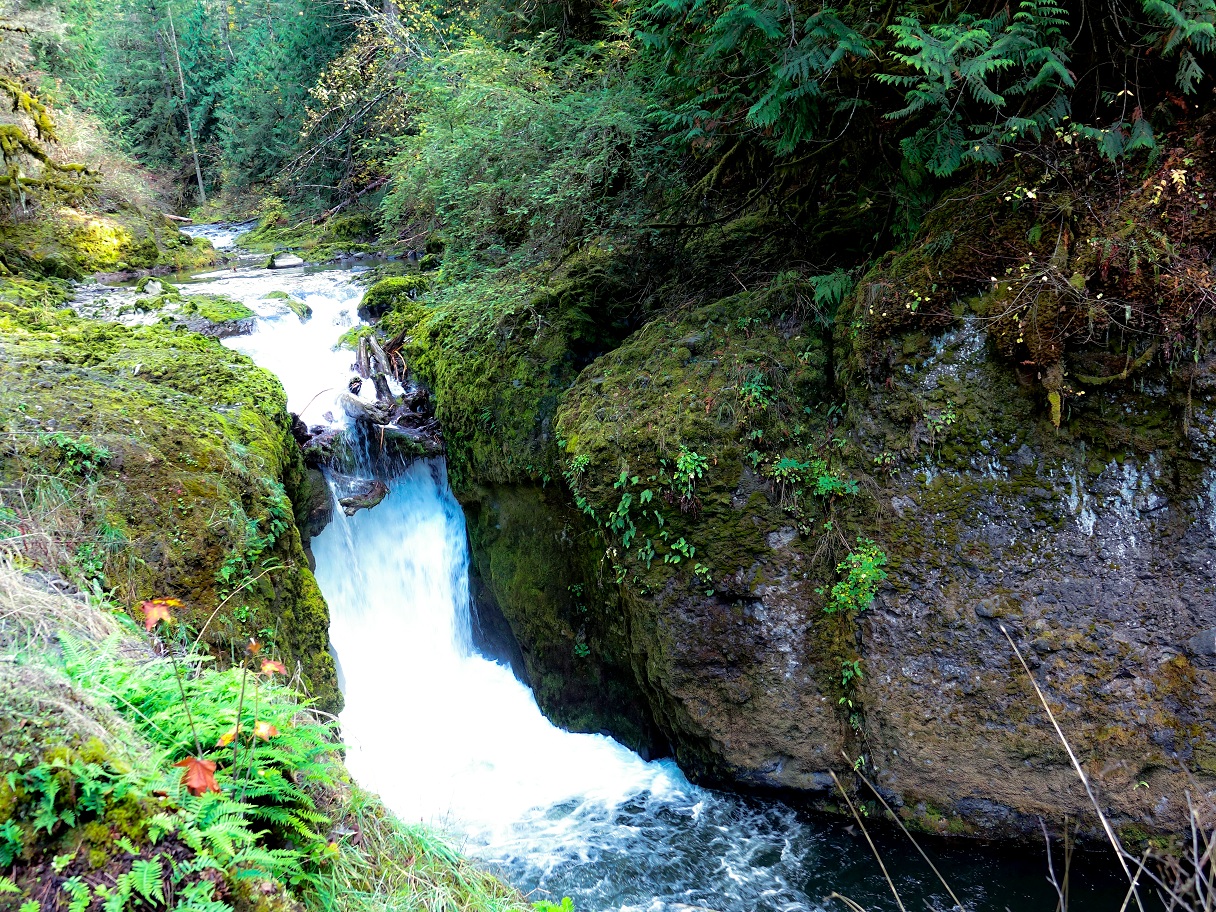 The beautiful falls were part of private parks run between the 1920s and the 1990s (when Thurston County purchased the property). The county long planned to open a park on the site but because of funding constraints was not able to open the falls to the public for 25 years.

For the first time in decades, the public can see waterfalls that have been formed by the Deschutes River cutting through rock likely left behind by a long-lost stratovolcano. Think of it in terms of a Mt. Rainier that is not there anymore.

Through most of its course, the Deschutes flows through till laid down by receding glaciers over the last 20,000 years. But, the rock through which the Deschutes River is creating the falls is some of the oldest visible rock in Thurston County, dating back over 30 million years.

The upper Deschutes falls cut through a northern jutting toe, a vast region of ancient volcanic rock. Officially, the region of stone is called the Northcraft Formation, named for Northcraft Mountain, a small peak less than three miles from downtown Tenino. The mountain in turn is named for Phillip Northcraft, who settled in Thurston County from Virginia in the 1850s. He only lasted five years in the west before he was killed during the Puget Sound Indian War.

The formation was named by Parke D. Snavely, who worked as a geologist for the federal government 100 years after Northcraft settled in Thurston County. He and his associates described a volcanic rock formation lying across most of Lewis County and crossing into Thurston County. In this part of Thurston County, most of this layer of rock is covered by newer layers except for the portion exposed by the Deschutes River. That ancient volcanic rock can be as deep as 1,400 feet.

This layer was laid down as late as 37 million years ago. It originated from a series of volcanoes that existed when much of Western Washington was not yet above the ocean. In that era, anything west of Tenino was part of the Pacific Ocean and the rest of what we know as the Cascade Mountains formed a wide coastal plain.

Beginning about 40 million years ago, volcanoes began erupting along the plain, developing into the early parts of the Cascade Range, but not the range we are familiar with. These early volcanoes spewed lava that became regions like the Northcraft Formation. They  have since gone extinct and have been replaced by peaks like Mt. Rainier and Mount St. Helens. They have eroded away while the active portions of the Cascades continued to grow.

The remnants of the coastal volcanic peaks that formed the Northcraft are called “the Rockies” although not the ones we typically think of in the mid-western U.S. They are a small series of mountains that, in contrast to the actual Cascades, look like foothills. They are obviously older than the Cascades and developed independently, so they could be considered their own mountain range. Their general location is north of Morton, south of Alder Lake and east of Centralia.

According to research by Paul Hammond of Portland State University, the “eruptive center” of the lava flow that formed the Deschutes Falls is somewhere near Newaukum Lake, about 9 miles north of Mossyrock. In the millions of years since the molten rock was erupted and spread across the coastal plain, it is possible that a mountain the size of a stratovolcano has eroded from the landscape. The underlying rock is still here, but an entire volcano, estimated to have rivaled the size of Mount Rainier, has simply disappeared over time.

This is a unique, fully-virtual theatre experience. So, snuggle up in your PJ’s, grab your popcorn, and enjoy the show from the comfort of your own home! Tickets on sale through Broadway On Demand for[...]
View Calendar