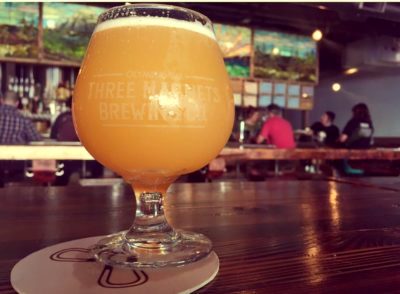 Since growing up in Milwaukee, the home of Miller Beer, I find the smell of yeast and hops to be pleasant and comforting, so I was disheartened when the Olympia Brewery shuttered its doors in 2003. Fortunately for beer lovers like me, over the course of the past few years, Olympia has become a hub for microbrewers. I decided to see how many spots we could hit on an afternoon walk one sunny fall Saturday.

We began our tour at the Three Magnets Brewery located on Franklin Street. This upscale brewery houses two restaurants. Both Darby’s, an Olympia classic, and Three Magnets’ own 3Mag Pubhouse are located within the walls of the brewery. We sat down in the brewpub and perused the menu, which is full of traditional fare like burgers and wings alongside more sophisticated choices such as the harissa pork belly sliders and a kale panzanella salad.

We decided to order the charcuterie and cheese board paired with three 5-ounce beers. This was our first stop after all, so starting off slowly seemed judicious early in the day. The board arrived with a nice selection of meats and artisanal cheeses and a baguette. It was a perfect mid-afternoon snack and went well with our paired beers; a Scottish ale, a double IPA with notes of apricot and pine and a cherry wood smoked porter.

The ambiance at the 3Mag Pub is pleasant and friendly. We sat at a long table and conversed casually with our tablemates, sharing thoughts on the various beers. When I commented on how good the fingerling fries looked on my neighbor’s plate, she reached over and offered me a tasty looking fry. Alas, I had to decline as it was still early in our tour, and we were off to the Fish Tale Brewery, a short walk up Legion Street.

Fortunately, I was not too full of cured meats to order my favorite brewer’s salad when we got to Fish Brewing Company, home of Olympia’s oldest brewpub, Fish Tale Brewpub and Fish Tale Organic ales. The Fish Tale Brewpub began serving customers in 1993 and is affectionately known to Olympia residents as “The Fish.” The full-service restaurant features 24 taps of beer and cider and, happily for locals, now contains a family-friendly section connected to the pub. Incredibly, a Fish Tale original, Beyond the Pale Ale, earned the title of “World’s Best Beer” at the World Beer Awards in 2015.

One of the most interesting aspects of Fish Tale Brewpub is the Mug Club. These mugs line the walls along the back of the pub and belong to members who have paid for the honor of having their personalized mugs ready for them when they arrive. The fish tacos on the menu tempted me, but it was time to move on to our next locale and I had a feeling there would be more food in my future

From there, we walked toward the bay and shortly reached our next destination, the Oly Taproom. “Welcome to Beer Nirvana!” is the message that greets you on the Oly Taproom website. While this is not technically a brewery, it is nevertheless an important stop on any tour that includes beer, and a nirvana for beer lovers it is. The Oly Taproom, located directly across from Percival Park, is fairly new and a welcome addition to the downtown scene. We sat in the window and enjoyed the view of the bay while perusing the menu.

At the time of our visit there were 13 beers on tap and a cider from Wandering Aengus Ciderworks in Salem, Oregon. The variety is extensive, with everything from a Framboise sour beer to an IPA from a brewery that I had never heard of in Redmond, Black Raven Brewing Company. This was our second to last stop on the tour and I contemplated skipping the beer and letting my husband review this final locale, but I am a sucker for a hefeweizen and the High Five Hefe from Iron Horse Brewery in Ellensburg was calling my name. This wheat beer was exactly as billed – “wheat, honey and ginger.” The description further added that no lemon was needed as is traditional in a hefeweizen and, in fact, asked patrons to “spare the beer from the embarrassment”! Kudos to the menu writer for that good chuckle. My husband chose the Vanilla Porter from Keyhole Valley Brewing in nearby Shelton. A richly flavored beer with notes of coffee and chocolate, it made a perfect nightcap.

And – there is pizza! If the rotating taps and retail selection of over 600 beers by the bottle are not enough, they serve delicious pizza as well. The 14-inch pizzas are made to order and there are several varieties to choose from. They all looked delicious, but after some negotiation, we ordered a vegetarian. It arrived quickly and piping hot with green pepper, red onion, fresh tomatoes and black olives. We will definitely be back, most likely on a Monday from 3:00 to 5:00 p.m. when happy hour means $1.00 off draft pints and $2.00 off any one of their house-made pizzas.

Our last stop was a cidery, rather than a brewery, but it was too good to skip. Heading down 4th Avenue toward the Whitewood Cider Tasting Room, we peeked in the large glass doors which open to the future site of the Well80 Brewery. No beer is brewing yet, but we look forward to adding that to our walking tour in early 2018.

Finally seated in the cozy 12-seat tasting room, affectionately called the Teeny, Tiny Taproom, at the corner of 4th and Plum we were ready to end our tour with a nice crisp cider. We were too stuffed for more food, but the Tiny Tasting Room proprietors welcome patrons to bring in take-out from the neighboring food trucks. We enjoyed a Summer Switchel, a crisp and refreshing end to a very pleasant afternoon.

The walk was do-able for all those aged over 21, but I cannot guarantee you will burn more calories than you consume. Cheers!