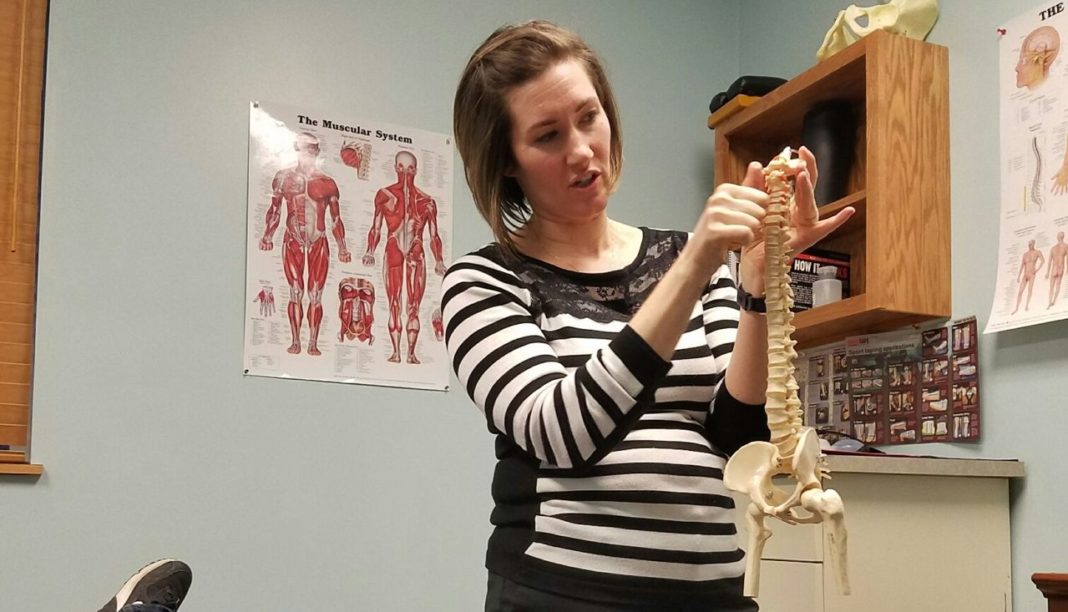 Recently, my son was diagnosed with migraines. I wanted to know if chiropractic care was an option to alleviate his symptoms. And what about other childhood ailments? What are the options for babies, school-age children and teens to receive chiropractic care?

I made an appointment with Eastside Chiropractic’s Dr. Amanda Kugel, who has completed advanced coursework in pediatric and prenatal chiropractic to get some answers.

At our first visit, Dr. Kugel completed a comprehensive first-time patient exam, learning about my son’s lifestyle habits, any traumas to the body and more. She took the time to explain why my son may be experiencing migraines, referring to multiple possible causes. One such cause is how the nervous system controls the flow of blood to the brain by changing blood vessel diameter. Another cause can be joints in the neck and back which refer pain as well. If bones are not moving well together in the upper back and neck, it can irritate the nerves and affect muscle tightness and blood flow.

It was at the second visit when my son received his first adjustment. At 11, he is a big kid already, but that doesn’t mean he needs the same type of adjustment an adult would.

Dr. Kugel is trained to accommodate accordingly and while chiropractic care has been proven safe and effective by numerous respected health journals, many people still believe the myth that chiropractic care can be damaging to young bodies.

“I think there’s a misconception that children shouldn’t be adjusted, because if they’ve seen how adults are adjusted, there’s a fear that it’s too aggressive for kids,” shares Dr. Kugel. “But the reason I did the pediatric and prenatal program was to learn how to use gentle forces to apply different techniques for children.”

“Their bones are not set the same as ours, they’re still forming,” she continues. “As we get older, our muscles pull on our bones and shape them, so adjusting an infant is different than a toddler, is different than adjusting a teenager. The adjustments used on children are much gentler, along with soft tissue work in the cranial area and abdominal area.”

For my son’s migraines, she not only looked at the nervous system affected by the spine, but she completed a cranial sacral analysis to assess symptoms. She explained how the sacral bones mimic those at the base of the head, and can be very telling when examining patients.

After my son’s first adjustment (which addressed posture and possible video game playing leading to tightness in his neck and back muscles) I could see color in his cheeks and ears as the nervous system allowed more flow between his spine and brain.

After his second visit, his mood seemed to improve immediately. As we move forward in his chiropractic care, I’m eager to see if his migraines are less. What other improvements might I see with continued care?

Behavioral issues, attention span and emotional state can be impacted by chiropractic care as well, which seem like a good fit for my son’s pre-teen years.

Dr. Kugel shared that bedwetting, constipation and diarrhea are other common childhood ailments that respond well to adjustments, addressing the nerves that control the digestive system. Even infants who suffer from colic, reflux or spit up constantly can find relief through chiropractic care.

Dr. Kugel took an interest in pediatric and prenatal chiropractic after her first chiropractic class when the topic was embryology. Coming from a nutritional background with experience as a nutritional counselor for the Women, Infants and Children (WIC) Program, she began to see correlations between the symptoms she saw in her clients and the grad work she was engaged in as a doctor of chiropractic medicine.

She recalled being frustrated in the WIC position. “I couldn’t do much to help, I just had to recommend a new formula.”

“I truly enjoyed helping families achieve better health through nutrition, but always knew I would like to have an even greater impact,” she adds. As a result, she took her education further by specializing in pediatric and prenatal chiropractic care.

Her journey to become a chiropractor originally stemmed from a personal fall. After three years of chronic hip and leg pain due to the injury, she tried chiropractic care and began seeing results within a few adjustments, including improved digestion and ease of breathing.

Armed with a degree in nutrition, chiropractic school afforded her the ability to combine her talents to improve her patient’s quality of life. With the specialized training in pediatric and prenatal chiropractic on top of it all, she’s a great resource to families and children.

Since joining Eastside Chiropractic, Dr. Kugel has served a variety of patients, including women who received care during their pregnancy and returned, bringing their infants with them seeking continued care for both babe and mom. The center’s motto is, “We create healthy families,” and Dr. Kugel is reinforcing that mission through her work.

Dr. Kugel encourages parents who are considering chiropractic care for their child to review the online resources at International Chiropractic Pediatric Association (ICPA), a nonprofit organization whose mission is to advance chiropractic by establishing evidence informed practice, supporting excellence in professional skills and delivering educational resources to the public.