Seven miles out Steamboat Island Road, tucked away in the trees there is a little church that is doing a lot of good. As a satellite location for the Thurston County Food Bank, St. Christopher’s Community Church distributes food to needy Steamboat Island families who are cannot make the long drive into downtown Olympia. 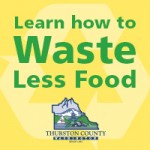 In 2013, members of the St. Christopher’s Community Church realized there was a need for fresh fruits and vegetables, some of the most difficult items for the Food Bank to come by.  They recognized it was within their power to make a difference and began the Open Hands Food Bank Garden.

“The soil and the garden facility was prepared in the spring of 2013,” says Bill Hanna, church parishioner and garden manager. “They put their first planting in that summer.”

In the years since that first season, the garden has undergone some changes and improvements. “This past spring we built the deer fence around it, so that was the big project for this year,” says Hanna. The gardeners have also expanded the amount and variety of produce they grow. “We do several varieties of lettuce, radishes, kale, carrots, tomatoes, peppers, beets, peas, beans, squash, zucchini, cucumbers, this year for the first time corn. Also we have an area designated for flowers for the Altar Guild,” who clean and decorate the sanctuary before every church service.

“The purpose of the garden is really to do good for the community,” says Hanna. “There’s a pretty good need out here for fresh fruit and vegetables, food, and just general economic support for people. The church is pretty enthusiastic about it.”

Tucker Smyth, church parishioner and regular garden volunteer, says that Lindy Vincent, the Food Bank Coordinator for the church, may have inspired the garden. “She actually goes and picks up food from the Thurston County Food Bank and brings it out here to rural families in this area who can’t get out to Olympia very easily,” Smyth says.

St. Christopher’s was created, both spiritually and physically, by its community, with the goal of serving that community in the best way possible. It was founded in 1959 but, according to the church website, parishioners met farther out Steamboat Island Road, in Rignall Hall, until 1971, when the current building was completed. “The Church was built by parishioners,” says Hanna. In that way, St. Christopher’s has always been the sum of what has been put into it, just as it is with the Open Hands Garden.

“There are only about six or seven people who work on the garden regularly,” says Hanna. “It’s been hard to get the word out that people can participate. We really do want participation.” There are several ways community members can help out. “In the spring they can donate seeds or starts, small vegetables you can buy at the hardware store and markets,” says Hanna. “Or, any gardener out in this area who has surplus vegetables who wants to get those vegetables to the Food Bank can bring them here. We will take them, along with what we’re producing here, weekly into the Food Bank,” says Smyth.

Also, anyone is also welcome to work in the garden. “In the summer we meet on Thursday afternoons,” says Hanna. “We start at 5:00 p.m. and usually it involves assessing how much we have to harvest, what needs to be harvested and what needs to grow for another week or two. Then we harvest whatever it happens to be— tomatoes, zucchini, whatever happens to be ready—and we put it in bags and boxes to take out to the Food Bank. And we do a lot of weeding.”

Even with only a few regular helpers, the garden produced 263 pounds of vegetables last year. “We haven’t been doing it that long,” says Smyth. “I can see it growing and getting bigger, producing more food as we learn more about gardening.”

“A great part of the garden, really, is to have a church connection to the community,” says Hanna. This is an idea reiterated by Smyth. “We feel that this is a good kind of community outreach for the church.” Hanna shared a philosophy from St. Christopher’s that sums up the goal of the garden: It is what the church does outside the walls of the church that is more important.

More information about St. Christopher’s Community Church, including services, activities, and events can be located on the church website.

Homes First Board of Directors is Passionate About Housing