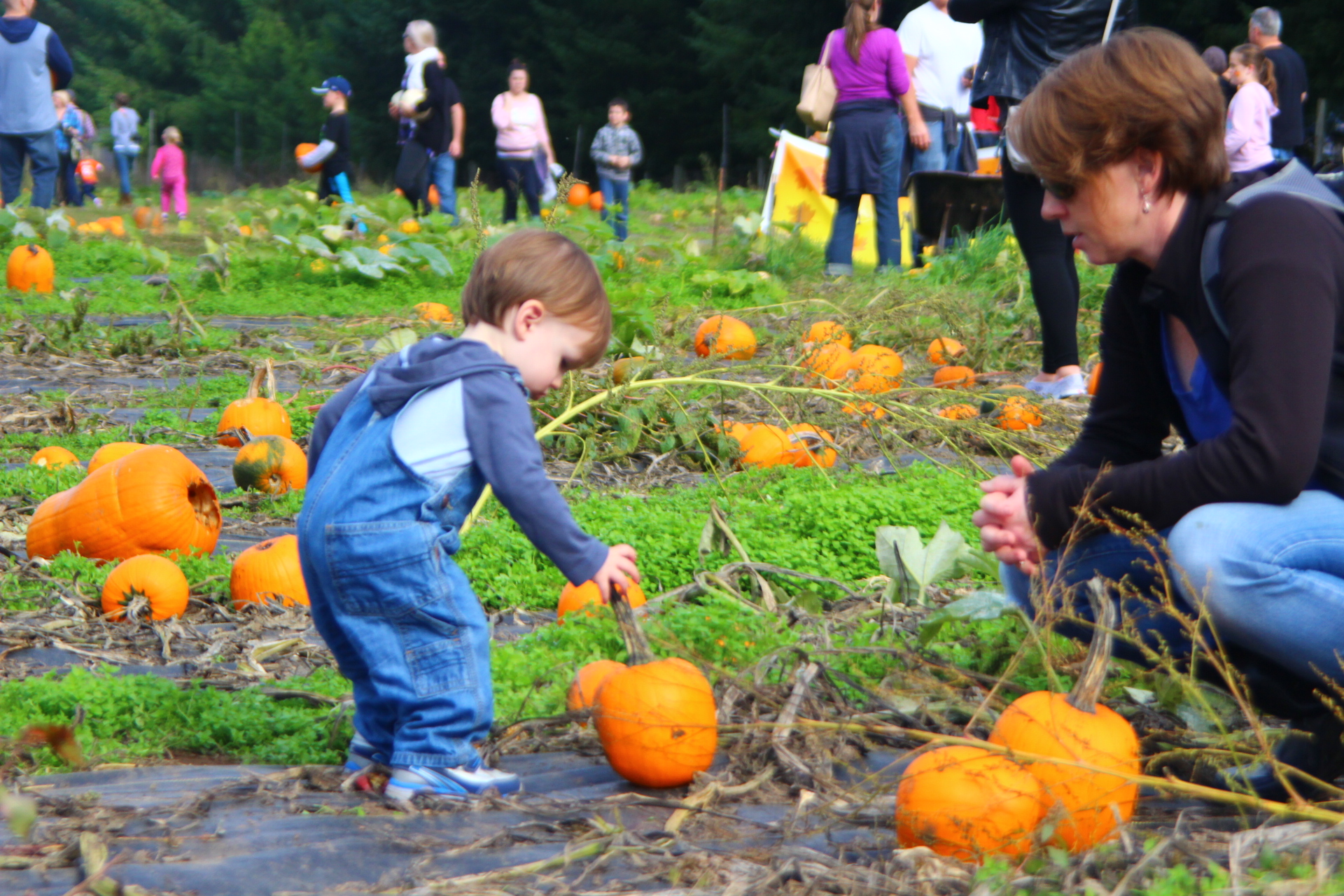 The artistic element of carving pumpkins evolved from an early Irish craft of carving potatoes, turnips, and beets. The spooky part stemmed from old Irish tales of Jack O’Lantern, or Stingy Jack, the legendary town drunk that had a faceoff with the devil.

Eventually, the tales and arts blended, gourds were substituted, and the practice became Halloween tradition – pumpkins were patterned with ghoulish faces, and a burning lump of coal was placed inside to illuminate the night and ward off any evil spirits.

Nowadays, jack-o’-lanterns aren’t typically associated with legend, but rather recognized as a fun, creative activity for all ages.

And half the fun is picking the perfect pumpkin.

In Thurston County and surrounding area, we have many patches to choose from – most with activities, snacks, and events – to make a day on the farm a great way to ring in the autumn season.

Did you know Hunter Farms has a variety of pumpkin called jack-be-little? They also have white, worty, and giants. The varietal names alone are reason to visit, but the farm offers more than just pumpkin picking. Decorative gourds and cornstalks are available for purchase, and a corn maze and food vendors beckon visitors to stay all afternoon. Cool fact: Hunter Farms has been in operation since 1889.

As its name suggests, Rutledge is well known for its maze – one that changes every year. From Marshawn Lynch to Twilight, the theme always delights. Three maze options are available: for all-ages, a checkpoint punch card challenge, for the mystery-minded, a chance to sleuth through the stalks following Farmer Joe’s clues. And for those looking to be spooked, the haunted maze awaits its victims. Zombie Paintball Apocalypse takes the mazes to another level, where hunting zombies isn’t just for television. Mazes aside, the farm also offers plenty of pumpkins.

Is it the sweet and sticky apple fritters and award-winning cider? Is it the animal train, wagon rides, and fields of perfect pumpkins? Maybe it’s all the cute animals. Whatever it is, Lattin’s has the formula for fall fun down to a science, and they have for years. Nearly 60 years old, the farm prides itself on community engagement, including donating leftover apple fritters to surrounding fire stations as a thank you to those who serve.

Not to be confused with the aforementioned Hunter Farm in Mason County, Hunter Family Farm is known for Christmas trees (but that’s another story), pumpkins aplenty, and animals – specifically, camels, and the optional hump-back rides. Pillow jumps and ATV adventures are also part of the wow-factor, making Hunter Family Farm a unique addition to the perfect pumpkin patch list.

Two words: Star. Wars. The theme of Schilter’s corn maze this year is “Galactic.” Schilter’s webpage reads, “Our galactic maze this year looks like Yoda, with the Death Star space ship hovering behind him. The maze is full of all kinds of trivia quotes from our favorite Star Wars character.  Don’t forget to “use the force” as you try to navigate your way through the maze. It is not for the faint of heart. As Yoda says,”Do or Do Not, There is No Try.” Good luck.”

Hence the name, Pigman’s has much more than pumpkins. A regular seller at the Olympia Farmers Market, Pigman’s seasonal, certified-organic goodies are also available straight from the farm. Ripe and ready produce includes pumpkins, tomatoes, and beets…Perhaps a chance to explore the ‘root’ of jack-o’-lanterns?

And don’t forget to check our October event calendar for more Halloween Fun.

Thrifty Thurston highlights inexpensive family fun in Thurston County. The weekly series focuses on family-friendly activities throughout our community. If you have a suggestion for a post, send us a note at submit@thurstontalk.com. For more events and to learn what’s happening in Olympia and the surrounding area, visit our complete event calendar.

The Little Gym is Opening Soon in Olympia