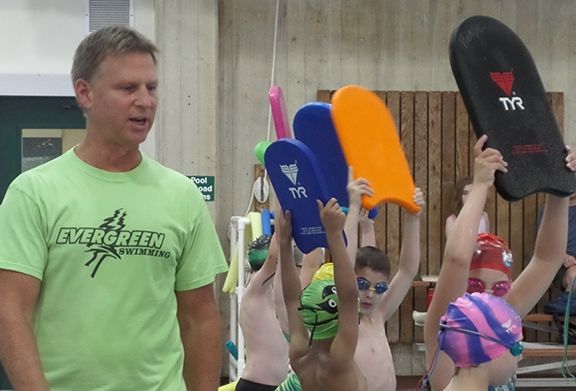 Scott Putzier knew he wanted to help coach his daughters when they were old enough to begin playing sports. What he didn’t know is what they would eventually select as their recreation of choice.

That turned out to be swimming.

Aquatic sports, however, were foreign to him.

In fact, Putzier had no prior interest in ever being in the water. Heck, even his choice of military branches supported this as he had been a member of the United States Army, not the Navy.

So, when Bob Pease approached him to become an assistant coach with the Evergreen Swim Club, Putzier was a bit surprised.

“I really didn’t know the first thing about swimming,” Putzier said. “I had no background in it at all.”

Pease wasn’t concerned with that fact. He simply had one request for Putzier.

“He told me not to worry about the swimming part of it. He said he would teach me everything I needed to know,” Putzier remembers. “He said, ‘I just want you to be you.’”

The coaching aspects can be learned. What Putzier brought to the table – and what Pease required out of him – was something more important when you’re dealing with youth swimmers – enthusiasm, caring, patience and fun.  These four character traits Putzier more than possessed.

After 14 years of coaching swimmers ages 6-12 with the Evergreen Swim Club, Putzier is hanging up his whistle, positively influencing countless of individuals along the way.

“It’s tough to leave, but it’s the right time,” Putzier said. “When you look back and start adding up the hours, you realize just how much time you’ve put into it. I really enjoyed all of it, but you end up taking away time from your family and friends. It’s your other half that pays the price.”

Born and raised in South Dakota, Putzier found himself in Olympia thanks to the Army after being stationed in Fort Lewis in 1983. Once his military career ended he enrolled at The Evergreen State College where he graduated with a degree in management.

“I went from all discipline to no discipline,” Putzier jokingly summed up his transition from soldier to Geoduck.

Hailing from a midwestern state best known for an iconic rock carving and grassy prairies, Putzier’s upbringing failed to feature too many trips to the community pool.

“There wasn’t a lot of places for us to swim growing up,” Putzier said. “I go back now and there’s plenty of places, but back when I was young, we didn’t have too many options.”

But even without the aquatic resume, Putzier was intrigued by the chance to coach.

“The club was in transition. The numbers were down. Kids just weren’t signing up for the program,” Putzier said. “Bob came to me and said he needed volunteers. I thought it was a unique opportunity.”

Over the next decade and a half, with Putzier’s positive traits shining through with each practice, the program flourished. The first class Putzier ever coached he had six students. His last class had 37.

“Having that small of a class to start things off was the best thing for me,” Putzier joked. “I could still remember everyone’s name.”

With Pease’s guidance, it didn’t take Putzier long to pick up the swimming techniques, and regardless if it was the butterfly or backstroke the coaching execution was all delivered the same way.

“It needs to be fun,” Putzier said. “People don’t realize how hard these kids work. How many hours they put into this sport, and it’s not like other sports. If you learn something at basketball practice, the next day at recess you can go out and show all your friends what you learned yesterday at basketball practice. With swimming you can’t do that, so it needs to be fun. These kids are sacrificing all their free time, the least I can do is make it exciting and fun for them while they are learning.”

Putzier’s approach of blending beginning stroke techniques with an entertaining atmosphere proved to be highly successful with a large majority of students returning the following year.

“I had someone come up to me, not too long ago, this teenage boy,” Putzier said. “He said I probably won’t remember him, but I had coached him 10 years ago when he was 8. He said how much he appreciated having me as a coach. To have an impact like that makes all the hours worth it.”

So, the man who never swam, quickly turned into the swim coach everyone loved.

“It’s hard to say goodbye,” Putzier said. “You always see the next generation of kids coming up and you say, ‘Okay, I will leave after this group gets through.’ But there’s always another generation of great kids coming in. It would have never ended.”