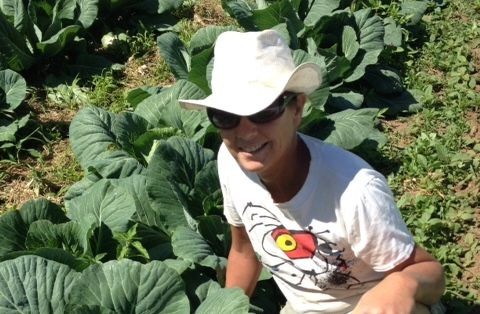 Rows of cabbages, pole beans, and snap peas line the plots at the Kiwanis Club of Olympia’s Food Bank Garden on the west side of Olympia. Members of the Kiwanis Club work together with volunteers to plant, weed, and harvest vegetables for donation to the Thurston County Food Bank. Every day, families go home with fresh vegetables, farmed just a handful of minutes’ drive from the Food Bank, thanks to the efforts of those who work in the garden.

The produce varies. Sometimes it is carrots, or zucchini, or squash. It depends on what the Food Bank’s clientele has shown interest in. “We’re in regular contact with the Food Bank as to what sells, what doesn’t, what they get too much of,” says Don Leaf, chair of the Food Bank Garden Project for the Olympia Kiwanis Club. This communication is what makes the project so effective – communication and volunteers.

“It’s basically a small farm without a crew,” says Sue Lundy, Produce Coordinator at the Thurston County Food Bank and regular volunteer at the garden. “We can always use more volunteers.” The Garden accepts volunteers in the form of church groups, field trip groups, 4-H clubs, sports teams. In other words, anyone who is inspired to donate their time to working in a garden. “We welcome individuals and groups,” says Lundy.

But once they get a crew together, they can easily make a huge difference. The Kiwanis Club harvests “25,000-30,000 pounds of vegetables [per year] in total from our three gardens,” says Leaf. “We try to raise vegetables in sufficient quantity to make a difference.” Thanks to their efforts, the Food Bank can put together what amounts to a produce aisle. Families can choose the vegetables they like, and especially what their kids will eat. “It helps Food Bank clients broaden their nutrition,” says Leaf. A task that proves difficult for many low-income families, since fresh fruits and vegetables in the grocery store are expensive.

Until 2010, the Kiwanis Club only had one garden in Olympia, the West Side Garden, started in 1990 by a man named Phil Paulsrud as a way to have a positive impact on the community. But the Food Bank’s demand for their produce was growing, so the Capitol Campus Garden and the Friendly Grove Garden were created, as well. But the spread does not stop there, Kiwanis Clubs in neighboring counties have been inspired to start their own Food Bank Gardens.

But the people who volunteer at the Garden do not do it for the recognition. They do this to make a difference, now and for as far into the future as they can. This year, they have an opportunity to train two interns who they hope will go on to work on a project like the Food Bank Garden for a long time. “We will help them understand the various aspects of planning and operating a small farm,” says Leaf. And though this new opportunity is thanks to a one-time grant, the Kiwanis Club sees it as a chance help their impact last. “We’re working on ways to make [the internship] continue and make that a regular program,” says Leaf.

But for now, the Kiwanis Club members and volunteers will continue to work on their farms as they always have. The most important thing is to feed those in need. “It’s addressing so many issues at once – local food security, nutrition, hunger,” says Lundy. From the beginning, they recognized an opportunity to serve their community, and to help others to do the same. That is what the Food Bank Garden Project is all about.

Anyone interested in volunteering can contact Don Leaf or Sue Lundy, who are the garden managers, through the Thurston County Food Bank, the Olympia Kiwanis Food Bank Garden Facebook page, or by contacting Don Leaf directly at leafd@comcast.net. They just ask large groups to call ahead.