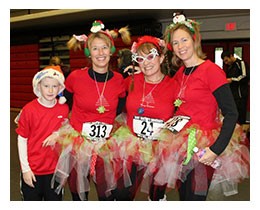 Runners and walkers of all ages and abilities are invited to take part in the annual “Reindeer Run” in support of the Olympia-Thurston County chapter of Crime Stoppers.  The event will feature a certified 5K run as well as a free one-mile Candy Cane Run.

The Reindeer Run is set for 9 am on Sunday, December 7 at the Hands On Children’s Museum, 414 Jefferson St. NE Olympia.  Runners can register on-line at Crimebusters.org or Active.com.   In store-registration can also be done at South Sound Running-3405 Capitol Boulevard in Olympia.

The day will feature a Christmas themed costume contest, a visit by Santa Claus and lots of other fun.   Sponsors include the Hands On Children’s Museum, South Sound Running, On the Run Events and Club Oly Running.

All proceeds from the run will benefit the non-profit programs of Olympia-Thurston County Crime Stoppers.  Some background on this chapter-

It’s Autumn in Thurston County so come in out of the rain and learn about your local candidates for Thurston County Board of Commissioners, Superior Court Judge, WA State Legislative District 22 and US House[...]
View Calendar

Melanie Bakala, owner of Melanie Bakala State Farm Insurance offices in Lacey and Shelton, wants to make sure you are covered should something happen....

Bank of the Pacific: Northwest Strong for Nearly 50 years