Home History History of the Railroad Lines that Cross Through Olympia 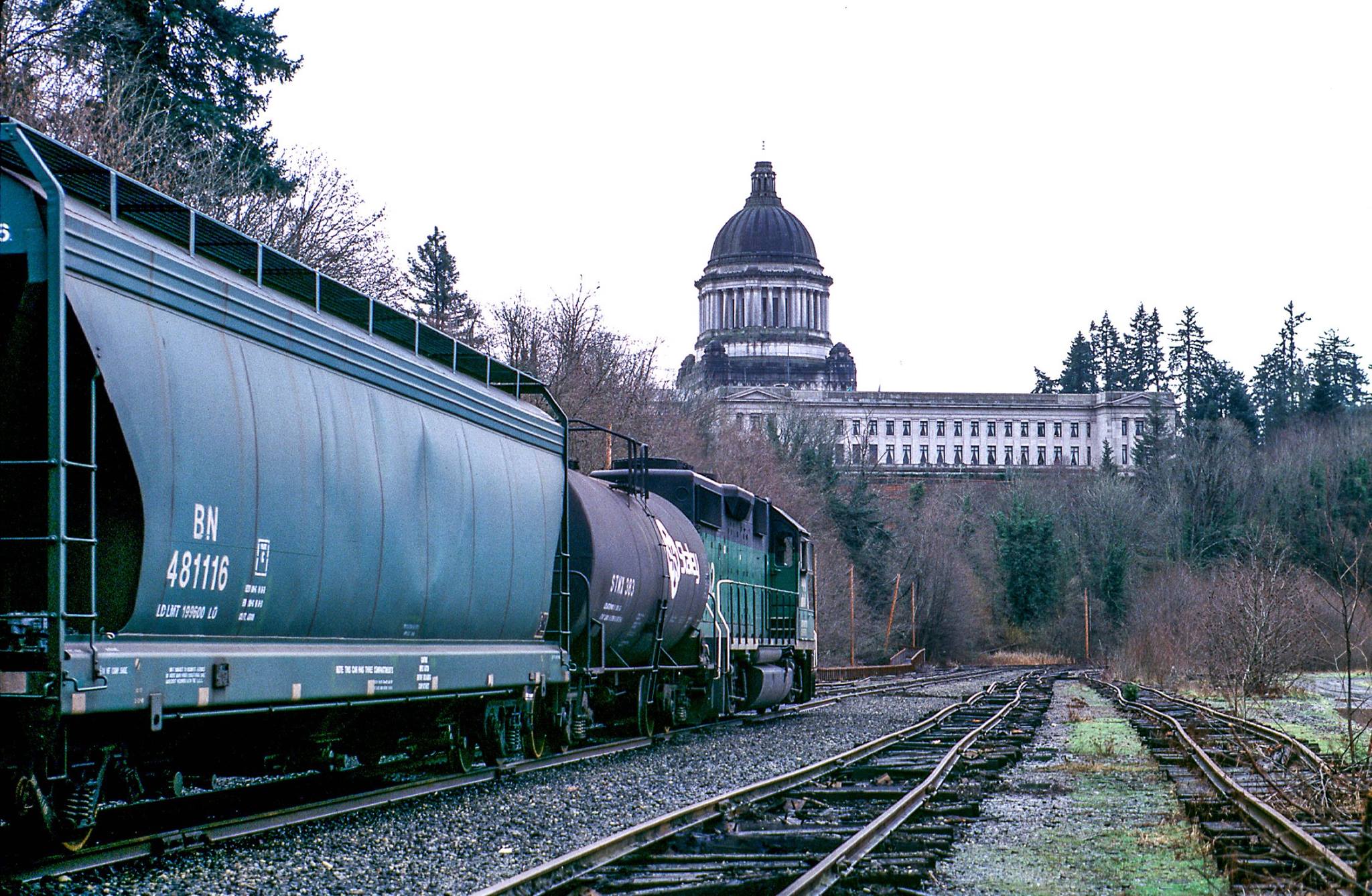 Throughout Olympia’s history, railroads have crisscrossed the city’s landscape. As James Hannum notes in “Olympia’s Railroad History,” (an essay in the People’s History of Olympia) at various points in our city’s history, we hosted three “common carrier” lines, two logging railroads and a trolley line.

The Northern Pacific Line was the earliest and most notable common carrier that laid track through Olympia. It is also the shortest remaining track, only covering a few miles through downtown Olympia, through what was originally called the “Olympia Subway,” across Capitol Lake and then down the Percival Creek ravine to Black Lake.

This line in the late 1890s spanned between Tacoma and Ocosta on the Pacific Coast. Since the 1980s, various segments have been abandoned, including a wooden crossing of Interstate 5 near Eastside Street.

While the last remaining segment of this historic line is still owned by the Burlington Northern Sante Fe (the modern successor of the old Northern Pacific), any trains you see operating on it are owned by Tacoma Rail, which is operated as a public utility by the City of Tacoma.

The second railroad still in operation in Olympia is the Union Pacific. This rail line comes into an urban portion of our community up the Deschutes River valley, passing through the old Brewery Complex, under Capitol Boulevard via a tunnel and then into downtown Olympia, terminating at the Port of Olympia.

After a failed attempt to make a foothold in the late 1890s, Union Pacific laid tracks in Olympia in 1915 when it bought out a local start-up effort. The Olympia Terminal Railroad was a direct result of the Carlyon fill, which created much of what we think of now as the eastern portion of downtown. By 1916, rail was moving from a connection to a regional rail line at East Olympia (then Chambers Prairie) and the Port of Olympia.

In addition to freight, the Union Pacific and Northern Pacific railroads also offered passenger service through Olympia. Northern Pacific’s depot was located along Columbia Street near Amanda Smith Way. The original 1890s building was torn down in 1966 and replaced with a very similar structure.

The Union Pacific’s Depot in downtown Olympia has a much more exciting history. Known best as the “Olympic Outfitters Building” (now Centro) on 4th Avenue, this structure was built in 1916 when the UP started service to Olympia.

On Friday, March 13, 1959, a 900-ton segment of rail cars was accidentally left uncoupled and unbraked at the border of Olympia and Tumwater. The cars slowly gained speed moving back downhill towards downtown Olympia, eventually smashing through the depot, killing one person and coming to rest 300 feet north of the building.

“It sounded like a dynamite explosion,” said William Crane, who was sitting in the China Clipper with his wife. “Then the freight cars hit.  I ducked under the table and hollered for my wife. When it was over we crawled out and went through the rear of the restaurant” (Seattle Times).

Olympian James Yenney was depositing a letter in a mailbox near the depot’s entrance when the train hit.  As he dropped the letter, he said, “the building seemed to come apart.  I ran like the devil to the middle of the intersection [of 4th Avenue and Adams Street], covered with dust and with wood and planks falling around me” (The Sunday Olympian).

Firefighters and rescue workers found Dilley’s body in the attic of the Sta–Well Health Service, more than 300 feet from the depot and on the other side of 4th Avenue. 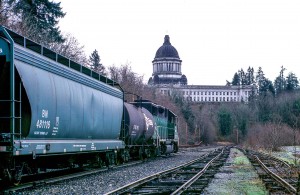 Like the old NP spur line across Capitol Lake, this connection is also operated by Tacoma Rail. Originally opened for operation in 1915 handling freight along the Tacoma waterfront, the rail line expanded into Thurston County in recent decades.

Gone but not forgotten: abandoned railroads of Thurston County, Washington