Technology is constantly advancing. From phones, tablets, gadgets, and apps to vaccines, energy efficient solutions, social media, and more, STEM fields are always changing, growing, and becoming a more prominent part of our lives. With so much new technology and an increasing abundance of STEM careers, it’s more important than ever for youth to be well educated in the fields of science, technology, engineering, and math.

Committed to bridging the “digital divide” and improving digital literacy nationwide, Comcast has been a longtime supporter of the Boys & Girls Clubs of America. Through My.Future, Comcast hopes to help prepare today’s youth for the more than eight million STEM jobs expected to be available in the United States by 2018, by bringing digital activities to the more than four million kids at 4,100 Boys & Girls Clubs across the country.

This is also the fifth year Comcast Foundation has provided financial support to Boys & Girls Clubs of Thurston County, including the most recent grant of $13,000 for the Tumwater Digital Connectors youth program.

Boys & Girls Clubs of Thurston County CEO, Joe Ingoglia, kicked-off the conference by sharing his excitement about the initiative and what it means for youth across the country and right here in Thurston County. Ingoglia also noted his gratitude for all the support Comcast has provided the Boys & Girls Clubs of Thurston County over the years, including their sponsorship of the Digital Connectors Program, a predecessor to My.Future which has helped illustrate the benefit digital skills building programs provide today’s youth.

Matt Watrous, executive director for the Boys & Girls Clubs Washington State Association, shared similar gratitude and excitement during the conference, noting the regional importance this initiative has for Thurston County and Washington State youth by helping prepare them for STEM careers with Washington-based companies like Microsoft, Amazon, and Boeing.

The conference continued with Diem Ly, Comcast’s community investment manager, who told the story of her own experience as a Boys & Girls Clubs kid and the value the experience had on her personal growth and development. With emotion in her voice, Ly said during the conference, “I’m proud that the Boys & Girls Clubs of America and Comcast NBCUniversal are announcing today a 5-year national partnership that invests in the My.Future Program.”

Jones’ son, Izzy, was a Boys & Girls Clubs of Thurston County kid from seventh through tenth grade. Always interested in technology, at just 5-years-old Izzy announced to his parents that he planned to study computer technology at the University of Washington someday. While both Jones and her husband are educators, neither of them understand much about computers. “STEM didn’t begin for [Izzy] in the Boys & Girls Club,” Jones said, “but I really believe that STEM became solidified for him right here in this Boys & Girls Club.” Now a senior in high school, Izzy has created more than 400 video game characters and is looking forward to studying computer technology in college.

For Brandon Pavlick, the Boys & Girls Clubs of Thurston County also helped nurture an interest in technology – an interest he didn’t even know he had. “I was the kid who didn’t fit in to anything. I didn’t know what I wanted to do ever. I had very little friends and was anti-social. But when I came to the Boys & Girls Club my main area of focus that I looked forward to everyday was the tech club,” says Pavlick. 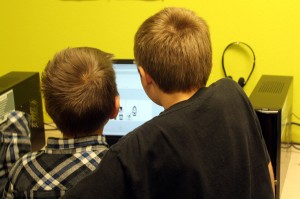 The Boys & Girls Clubs of America and Comcast are proud to introduce the next step in boosting national digital literacy with My.Future. To learn more about the My.Future, visit myfuture.net.