Home Everyday Neighborhood Notes – An Update on the Transformation of the Park at... 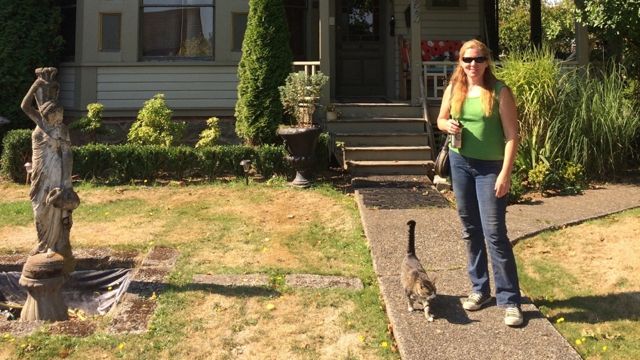 Its history you might already know: an abandoned building torn down and a community rising up to fight against a convenience shop, followed by the transformation of the space into a community park. But the future of this land, which sits at the intersection of Harrison and Division Streets, is unknown and hopeful.  And what this land will look like in 50 to 100 years is what Alicia Elliott, who bought the land in 2012 and deeded it the West Central Park Project this year, really stops to think about. Will this land be able to maintain itself?

Many initiatives have been put into place to help shape and maintain a positive future for West Central Olympia Park.  At the head of those changes, the West Central Park Project, formed in June 2013, oversees the park.  Elliott, president and founder, works along side the nine-member board that can grow to 12 members under its bylaws.  The West Central Park Project is credited for several events, such as Monday Movie Nights and the Harvest Fest, and with the help of the volunteers, has transformed a vacant corner lot into a welcoming space.

The Project’s mission, as stated on its website, is “dedicated to creating a public, open, green space that can serve the recreational, educational, artistic, and musical needs of the community in which it sits.  The space created by the neighborhood, for the neighborhood, to be a model for other neighborhoods to create similar spaces and thereby improve their economy and their quality of life.”

Although there has been a progression of site designs, Elliott walked me through the current vision, which includes ideas for within the .64 acres of green space, such as a picnic shelter, two bathrooms, a bee and butterfly hotel, and rain gardens. And for the surrounding neighborhood, a café, restaurant, small stores and a bed and breakfast.

Located on Harrison Avenue, going east from Division Street, the recently closed DeGarmos’s Compounding Pharmacy is marked to become Parkside Café in the fall of 2015. The café will also be ran by West Central Park Project and additionally serve as the commissary for future food trucks to be located at West Central Olympia Park.

Within the open event area, the food trucks and picnic shelter will make a great compliment to the West Olympia Farmers’ Market, which has plans to move its location to the park for 2015. Neighbors are encouraged to walk, bike, or bus to the park, but there will be a small amount of parking space available.

When asking Elliott about the timeline for these projects, she noted that many projects are subject to funds; donations are accepted to meet Park Project’s goal of $152,500.

And Elliott has her own projects, too. Elliot plans to convert two of the houses on the border of the park and Cushing Street, which is parallel to Division Street, into a two bedroom and two bathroom bed and breakfast and the other into a restaurant with beer garden in the back.

Another vision is to have a few of the houses on Division Street transformed into small businesses, such as a “kitchen shop or cake shop or yoga studio,” says Elliot.  Encouraged to boost the local economy, many of the Elliott’s visions center around creating opportunities for local businesses to thrive. The houses, in addition to the restaurant and bed and breakfast, Elliott plans on maintaining herself.

One of the main long-term goals for the West Central Park Project is for the park to be an educational garden. Daniel Cherniske, one of the board members, is a Permaculture major at The Evergreen State College.  Cherniske contributes to creating sustainable garden plans, including an edible food garden and using the Hugelkultur method of gardening. The Hugelkultur method creates raised garden beds that are similar to “sheet mulching or lasagna gardening.” The Park Project plans on creating plaques to identify foods in the garden. The community is encouraged to sample and share the food the garden grows. Elliot says “we expect people to harvest the food when it’s ready.”

Involvement and awareness from the community is not only crucial to the success of the park, but also to the safety of the neighborhood. Initially some members of the community were concerned about the restrooms and homeless population of an open park, but Elliot happily reports there have been no incidents.

The park is host to other community projects, including being the hub for Soil Cycles, a local effort that picks up compostable waste via cargo bikes and turns it into rich compost. Elliott has also visited elementary schools to do presentations about the park, gardening, and community effort.

If you are new to the Olympia area, or just need a refresher, take a look on Google maps to see a before picture of a vacant lot that Elliott once described as “urban blight.” Now, rich with vegetation, picnic tables and plans for an even greater transformation, I know I am not the only one who is excited to see the after picture.

For more information, visit the West Central Park Project via Facebook. Volunteers are welcome to join every Sunday throughout the year from 10:00 a.m. – 1:00 p.m., rain, sun, or snow.

Jace Munson and the Thurston Economic Development Council: Building Together

Learning to Ride with Travel Training and Bus Buddies