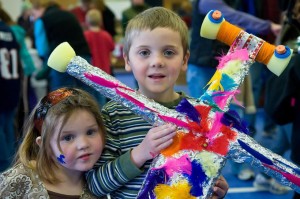 United Way of Thurston County announced a Make the Match campaign to raise extra funds for its Community Care Fund. Text-donating has revolutionized the ease and effectiveness of giving money to charities and through community partners, United Way is launching a text-donating application to raise money that supports local non-profits preparing children to be resilient, learn and succeed.

In Thurston County, 63 percent of low-income kids don’t start kindergarten with the skills they need to be successful and 1,123 children were recorded homeless in 2013. United Way understands the importance of addressing such community conditions and helps to find solutions in collaboration with partners.

In effort to increase fundraising, United Way received support from OBee Credit Union to launch the campaign using Cafe Give, a social fundraising platform. In addition, Puget Sound Energy Foundation will help leverage donations through a dollar for dollar match up to $10K.

“Puget Sound Energy is dedicated to helping address local needs and priorities in our community, and our Foundation is honored to help double United Way’s fundraising power through this match,” said Farra Vargas, PSE manager of energy efficiency outreach.

Supporters can text “UNITED” to 5-5-1-5-5 to donate or pledge. Those who text the keyword will be directed to a website where they can complete their donation or pledge and announce their contribution through social media.

“The text-donating application allows donors to give what they can via their mobile phone or social media,” said Lee Wojnar, United Way board president and marketing vice president of OBee Credit Union.

“Advocates of the campaign are encouraged to use their personal social media pages to inform their followers of United Way’s efforts and how they can also contribute.”

“We’re embracing the power of social media and mobile giving to shake up our fundraising efforts,” said United Way Communications Director, Michelle Rodriguez. “This is simply a new way for us to reach the online community, strengthen partnerships and increase donations.”

United Way continues to build strong relationships with community partners such as local nonprofits, government and businesses to leverage more investing and volunteering in the community. For more information about how to support United Way of Thurston County, go to www.unitedway-thurston.org or call (360) 943-2273.

Join TOGETHER! This Summer To Support Students and Families