Home Everyday Olympia Entomologist Plays with Spiders and Other Bugs 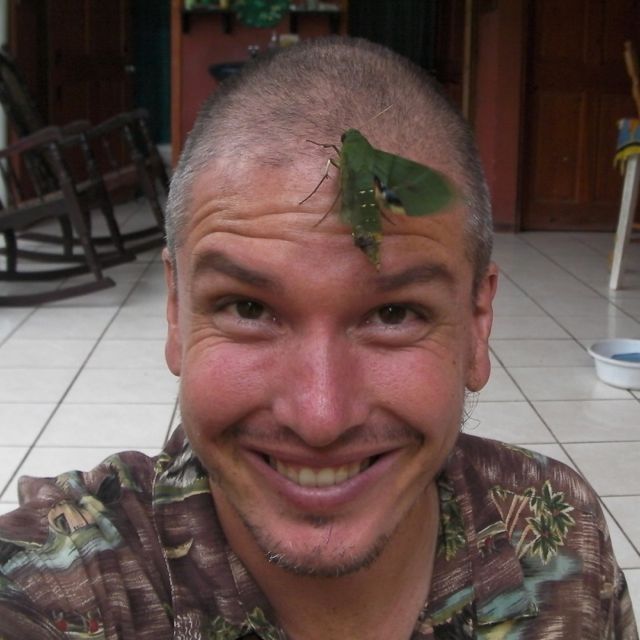 The spider walks along Arlo Pelegrin’s hand. Pelegrin doesn’t recoil in terror or try to smack it with his other hand. Instead, he gently guides the arachnid, cupping it when necessary so the creature doesn’t hurt itself or get away.

“This is a very common spider in American homes,” says the entomologist.

I meet Pelegrin at his office in the Natural Resources building. His job is to monitor invasive species for the Department of Agriculture. The spider he’s holding is commonly referred to as the cellar spider.

“Moths are huge parts of our existence,” says Pelegrin. “They’re responsible for hundreds of millions of dollars in crop loss every year and compete with us for almost every stored product.” During an upcoming lecture, Pelegrin will not only focus on the economic aspects of butterflies and moths but he’ll also discuss different aspects of their biology. “There’s a lot of fascinating things about these animals,” says Pelegrin.

Arlo carefully rotates the spider. He shows me two little legs just below the mouth. He knows this spider is female because the legs aren’t bulbous. I knew nothing about this creature when I found it hiding in the crawl space. Her legs are long and gangly. It took some time to coax her into an unused piece of Tupperware. As I drove down to see Arlo, I kept “feeling” it crawl across my body even though I could see her through the slats I made in the container.

“Here, in Thurston County, we don’t have spiders that can hurt people,” says Pelegrin. This assuages my fear. Still, I’m no friend of the spider. They’re creepy looking and always seem to be watching from remote corners of my home. “They like to sneak around because they don’t have armor,” says Pelegrin.  Spiders have little to protect themselves. Contrast that with the beetle. Beetles have armor and, I’m told, don’t taste very good.

Pelegrin has lived an interesting life. He’s traveled the world and been exposed to some of the most interesting and dangerous creatures on earth. He’s even let a few of the more poisonous ones hang out on his hand. “As long as they’re not getting any sense from me that doom is eminent then they’re not going to bite me,” says Pelegrin.

What about the rest of us? You know who you are, the ones who run screaming from a room or climb on top of the counter at the sight of a spider. Pelegrin has some advice that might help.  First, remember you are 10,000 times bigger. Also, it might be a good idea to capture the next spider you find lurking in your home. Place it inside a container and just look at it for a while. Once you get comfortable, start doing a little research. Learn about the different parts. “The naming of things takes some of the power away,” says Pelegrin. “Before you name those parts it’s just a mass of legs and hair that are out to get you.”

Arlo places the cellar spider back into the container. As the conversation wraps up he gives me something to think about. “Do a Google search of spider bites and you’ll find some really hideous images. What you’ll never find is an image of a spider biting a person.”

I take the spider home and put her back in the crawl space. We’re never going to be friends but at least now we’re not enemies.

Part of Pelegrin’s work involves outreach. On Wednesday, April 30 he’ll be giving a talk on butterflies and moths at the Olympia Timberland Library. The lecture is the culmination of a four-week series hosted by the library called “Celebration of the Species.”

Arlo’s presentation runs from 7:30 – 8:45 pm at the Downtown Olympia Library.