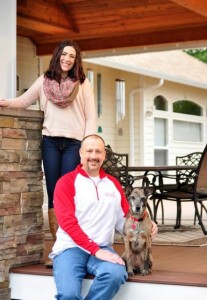 “I was planning on being the next John Stockton,” says John Erwin. Erwin played some college ball but never made it to the NBA.  He put down the ball and picked up a hammer. That doesn’t mean he gave up the sport. Erwin plays in a regular game at Tumwater Valley.

Erwin worked construction during summer’s off from school. Afterwards, he moved to Newport Beach in California. He got a job doing plumbing work. “After about a year I really was learning to hate what I was doing,” says Erwin. “I’m a bigger guy getting under sinks and clearing out drains was a challenge.”

Erwin made the decision to try something different after having a conversation with a local remodeler.  He went back to school. “I enrolled in Orange Coast College part time,” says Erwin. He took a couple classes a quarter and finished within a few years.

“It’s too hot and there’s so many people,” says Erwin regarding his decision to return to Washington in 1993. With financial backing from his father, Erwin started his first business later that same year. He ended up selling his share to his dad and opened John Erwin Remodeling in 2000.

Erwin’s business is thriving. John Erwin Remodeling has won over 30 Remodeling Excellence Awards and this past year received the Big50 award from Remodeling magazine which is recognized nationally as the remodeling industries “hall of fame”.

Chippy nuzzles hello. This is Erwin’s dog. There are pictures all over the walls of Erwin’s daughter and of the Seahawks. There’s also a little sailboat hung from the ceiling. Erwin built the craft himself – at age 17. It’s pretty impressive. Makes we wonder what his jump shot looks like.

To see the boat or to talk with John about a remodel give him a call at 360-705-2938. You can find more information about John Erwin Remodeling by clicking on the link.