Ballet Northwest is proud to debut a brand-new Act I set for their annual presentation of Tchaikovsky’s The Nutcracker. Over 200 dancers will grace the stage this year as audiences experience the timeless holiday tale in a whole new way.

Set designer Jill Carter and Co-Artistic Directors Ken and Josie Johnson have been working since last spring on the new set, which shows the interior of the Silberhaus home on the eve of their Christmas party. Technological advances in stage design and lighting will make the set to appear to grow when Clara joins the Nutcracker and toy soldiers in battle against the Mouse King.

200 people make up the cast, which features local dancers as young as eight years old as well as Ballet Northwest company dancers. Ballet Northwest’s dance company is comprised of over 70 dancers age 12 and older, primarily from the South Puget Sound area. Guest dancer Iyun Harrison joins the production as the Nutcracker Prince. Mr. Harrison danced professionally with Dance Theater of Harlem and Ailey II, both in New York City. Currently he is on faculty at Cornish College of the Arts in Seattle, and locally at Johansen Olympia Dance Center. He is also the Artistic Director of Ashani Dances in Seattle.

The production is choreographed by Ballet Northwest’s Artistic Directors Ken and Josie Johnson and is sponsored by The Olympian, Dr. Andrew Kapust, DDS, Kell-Chuck Glass, and Mixx 96.1 FM.

Co-Artistic Director Josie Johnson states, “We’re thrilled to be debuting this amazing new set, which will make the production even more magical.”

Her husband and Co-Artistic Director Ken Johnson adds, “The talent this year is greater than ever, so much so that we’ve triple cast all of the soloist parts so the dancers rotate through different parts, like most professional companies.” 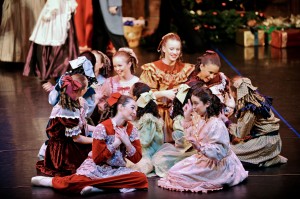 During a family Christmas party, the mysterious Herr Drosselmeyer gives Clara a wooden Nutcracker in the shape of a soldier dressed in parade uniform. When her brother Fritz grabs for the toy it breaks. Crushed, Clara nurses the Nutcracker with Herr Drosselmeyer’s help. After the party, Clara visits her Nutcracker in the great room and falls asleep on the sofa. At midnight, she awakens to find herself shrunk to the size of the toys under the tree. An army of mice corner her and the Nutcracker springs to life. He, Clara, and a host of Toy Soldiers defeat the Mouse King and his army. The Nutcracker is revealed to be a prince, finally freed from the Mouse King’s magic. To thank her for breaking the spell that bound him inside the nutcracker, the Prince takes Clara to the Land of Sweets, where The Sugar Plum Fairy and her people dance to celebrate the Prince’s return.

The Nutcracker is a fairy-tale ballet based on the L’Histoire d’un Casse Noisette (The Story of the Hazelnut-Cracker) by Dumas Père, which is itself based on The Nutcracker and the Mouse King by E.T.A. Hoffmann. Peter Ilyich Tchaikovsky wrote the score for the ballet, which premiered on December 17, 1892 at the Maryinsky Theater in St. Petersburg with the Imperial Russian Ballet. Though The Nutcracker was performed in Russia for many years, it was not performed in its entirety in the US until December 29, 1944 by the San Francisco Opera Ballet, where it became an annual holiday tradition. For 10 years, they were the only company in the country to perform it until the New York City Ballet staged a production with George Balanchine’s choreography on February 2, 1954. It wasn’t long before the ballet secured its place in American tradition. Balanchine’s choreography has become the most emulated in the world. 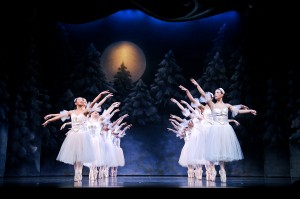 Since 1970, Ballet Northwest has been a community-based group dedicated to promoting, teaching, and preserving the art of dance in Southwestern Washington. The company offers educational opportunities for local dancers as well as outreach throughout the community.