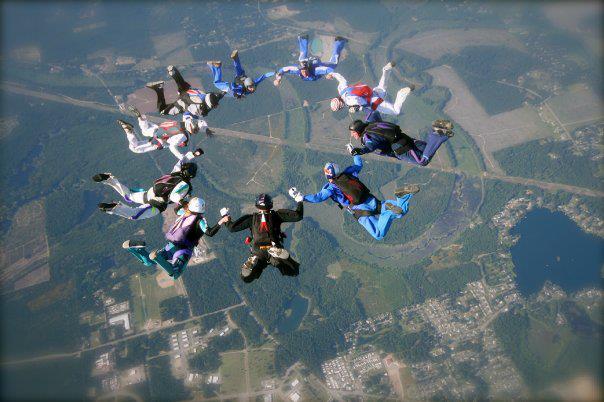 Luke Aikins, along with Jessie and Andy Farrington, can vividly remember the first time they jumped out of a plane on a solo jump.

For all three, that first step towards solo exhilaration came around the age of 15 or 16, a time when most teenagers dream of obtaining a driver’s license and not necessarily the adrenaline stemming from a solo dive.

“On my sixteenth birthday, I made 15 jumps,” said Andy Farrington, whose first tandem jump came with his father Geoffrey in Austria at age 12. “Then I went and got my driver’s license later that day.”

“I was 15 when I first dove out, and I was afraid, flat out afraid,” said Jessie Farrington, Andy’s mother and Geoffrey’s wife.  “There’s those that admit they’re afraid, and those that will lie.  You should be nervous.” 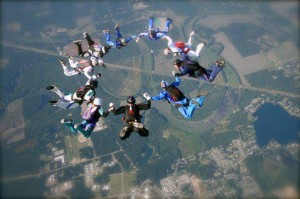 “I remember letting go and the chute opening. That was so fun, I was shaking from excitement,” said Aikins, Geoffrey and Jessie’s nephew.  “I waited sixteen years to do that.  It was indescribable. There was no fear, just all excitement.”

That journey for excitement and thrill is imbedded in the blood of the Farringtons and Aikins, a family tradition so to speak.  Jessie and Geoffrey Farrington currently own and operate Skydive Kapowsin in Shelton, where Andy and Luke both serve as instructors when they’re not out on the road (or more appropriately, the sky) as members of the Red Bull Air Force team.

Jessie Farrington’s father (grandpa to both Luke and Andy) started the sky diving business before the Farringtons took over in 1979.  The business moved from its original Puyallup location to the Shelton area in 2006.  The crew make around 20,000 jumps with customers per year.  About 4,000 of those jumps are with first timers.

The longtime knowledge of sky diving has earned Skydive Kapowsin and the family a reputation within the sports community.

That reputation led Andy, Jessie and Luke to a roll in the recent blockbuster movie Iron Man III, continuing a tradition laid down by Geoffrey Farrington, who was featured in movies such as Operation Dumbo Drop and Air Force One.  The shooting for the movie was done in two North Carolina locations, with two weeks taking place at Oak Island, and the other three in Wilmington.

“The actual process was a lot of fun. We were on a 100 foot zip-line for part of it. Then free falling with hidden rigs and no altimeters, no automatic openers, no goggles,” Jessie Farrington said. “So it looked like we were free falling in our street clothes.  It was very exciting.” 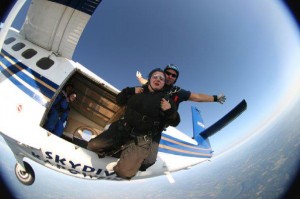 “There’s a guy who skips on the water over a rowboat, that’s me,” said Luke Aikins, who was the Skydiving coordinator for Red Bull’s Stratos Jump. “It was a steel barge in real life, they switched it for the movie.  That was the most nerve racking part for me.”

“(The main stunt coordinator) made it challenging, but he was easy to work for,” said Andy Farrington. “They had high standards and some people involved aren’t as experienced sky divers.  So there was a lot of discussion based on our knowledge.  They were very receptive to our feedback and that was cool.”

Appearing in the movie came about after Andy and Luke were approached with the idea from some of their Red Bull teammates.  Being sponsored by an organization that not only is on the cutting edge of the sport, but continues to push its limits, is a dream come true for the two experienced skydivers.

“In my opinion, I have the best job in skydiving,” said Aikins, who along with his obligations to Red Bull and Skydiving Kapowsin works with the military as well.  “They give us the opportunity to keep pushing the limits, and really not many other companies would support these kinds of (activities).   I taught Brian Vickers (a NASCAR driver who was sponsored by Red Bull) to skydive four days before the Daytona 500.  What other company would allow that?”

“Red Bull is great because the majority of businesses are too conservative to get behind so called dangerous sports,” said Andy Farrington, who, along with competing in skydiving events, jumps into spectacles such as Seattle Seahawks games through his duties with Red Bull. “It’s a great sponsor to push the sport and bring it to the public.” 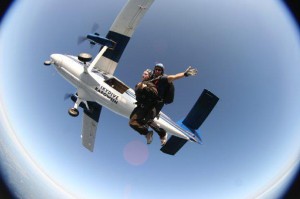 Luke and Andy have been involved in the shooting of another blockbuster movie that will hit theaters in the summer of 2014.   Besides the general release date, the cousins were mum on the details.

“It hasn’t been announced yet, but Andy and I were shot jumping in military equipment for a movie that will be released next year,” said Aikins. “Being involved in movies, that’s something I enjoy and hope to continue to do more in the future.”

Jessie Farrington has seen the evolution of skydiving and associated sports first hand.  Her family has become intricate members to the sporting community.

“It’s exciting to watch (skydiving) evolve, and just see new ideas, new procedures come to light,” said Jessie Farrrington. “The most exciting part for me was teaching my kids to jump. I was excited but nervous during that and I hope to teach our grandkids.  Now, we have 14 members of the family involved somehow.  That’s pretty impressive.”

Working directly with his family is something Aikins does not take for granted.

“I have friends who see relatives once a year and I see mine every day,” said Aikins, who like Jessie and Andy, is a certified pilot as well.  “In this job I can get into a plane, jump out and go to dinner. We try to remember how blessed we are.” 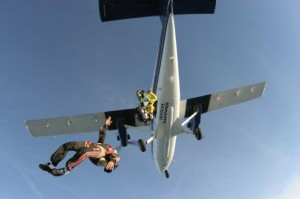 Andy Farrington realized long ago that a job should not revolve around money.

“You cannot be involved in skydiving and do it for the money,” said Andy Farrington.  “That’s part of why I like teaching.  You’re helping others face their challenges.  It makes your job not a job.”

He is also thankful for the legacy passed down from his family.

“I grew up in the sport, I saw my parents do incredible things, my grandpa jump when he was 86, and it’s all I’ve ever wanted to do,” said Farrington.  “I guess it’s in my blood and I’m so happy that’s the case.”

Come to the Friends of Lacey Library Book Sale Dec 3 & 4 from 9:30AM to 4:30 PM. Featuring our special Holliday Collection, as well as many items not at previous sales. All proceeds benefit[...]
View Calendar