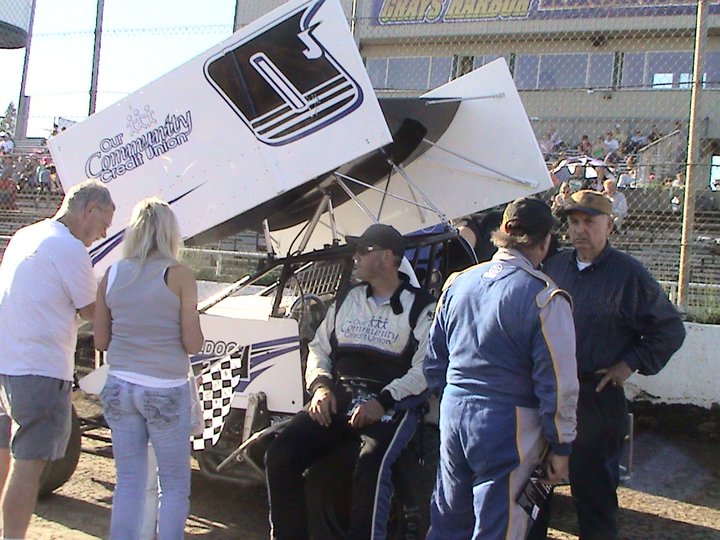 The Grays Harbor Raceway was back in action on Saturday June 1st for Fan Appreciation Night presented Our Community Credit Union.  The race marked the first event since May 11th after two consecutive weekends were cancelled due to weather.  Classes in competition were the 360 Sprints, Shipwreck Beads IMCA Modifieds, USAC Ford Focus Midgets, Cut Rate Auto Parts Street Stocks, and Hornets.

Van Aagten, from Shelton, stepped into the Jay Cole owned Our Community Credit Union/Bulldog Trailers #0X machine for the evening making it his first start of 2013.  Margeson would keep his car in the lead and would go on to capture the victory.  Margeson is the third different winner in as many races this season in the 360 Sprint ranks.

“It’s great to get the first win out of the way,” commented Evan Margeson, “it certainly helped starting on the outside front row.  I just kept focusing on hitting my marks and not making any mistakes.”

Randy Van Aagten would finish a respectful second place while finishing in third was the Herz Precision Parts #22 of Mike Romig from Vancouver.  Crossing the line in fourth was Jason Reed of Elma in the Swan Island Sandblasting #19M Rocket and placing fifth was Shelton’s Jay Cole in his Our Community Credit Union/Bulldog Trailers #0J machine.  Fast time of the night was Cole at a time of 14.151 seconds while Romig earned the heat race win.

Craig Moore was on a mission in the Shipwreck Beads IMCA Modified main event.  The Seabeck driver mastered the setup and preferred running the middle groove at a very quick pace.  Once he took the lead he was off and running to put the Power Punch Oil Supplements/DNC Competition Engines/Williams Family Salsa #14 GRT in the winner’s circle.  For Moore it was his fifth main event win of the season but his first at Grays Harbor Raceway this year.

“It’s great to get this win here,” said Moore, “it took us a little bit to get a handle of the drive this new car has.  The track was pretty dry slick and I bought this car for these conditions and it worked out great tonight.”

Cosmopolis pilot Tom Sweatman finish in the runner-up position in his Sweatman Trucking/D&D Dyno #11 machine while third went to the Wishkah Iron Works/Ozman Services Inc. #75X Skyrocket of defending champ Joe German from Wishkah.  Jeff Foster of McCleary ended the night in fourth in his J&F Automotive/Bayview Redi-Mix #8 mount followed by the Jacknut Apparel/CNK Machine #12 Shaw of Hoquiam’s Zack Simpson.  Heat race winners during the night were German and Foster.

In the first two USAC Ford Focus Midget races at Grays Harbor Raceway the winner had been the same driver, Chase Goetz.  In the early goings Goetz, of Snohomish, would battle with Ocosta’s Ariel Biggs for the lead.   Biggs, in the Don Emery owned #11E entry, would lead the first few laps before Goetz would take the lead on lap three.

Peterson would have no issues once taking the lead and would go on to win the race.  For Jared it was his first win at GHR in his first race of the season at the 3/8-mile clay oval.  It would also mark a clean sweep for the young man as he set fast time and won his respected heat race.

Chase Goetz would end the evening in second while in third was Ariel Biggs.  Completing the top five finishers was the MASCO Petroleum #44 Beast of Montesano driver Jeremy Miller in fourth and Todd Hartman from Bothell in fifth.  Fast time of the night went to Jared Peterson at 16.597 seconds while heat winners were Peterson and Miller.

In the third Cut Rate Auto Parts Street Stocks event of the year a huge car count was on hand and Hoquiam’s Jason Tole was once again in victory lane.  The defending champion Tole would take the lead from the Eddie’s Automotive/Stykes Engines/Fusion Graphics #17 Camaro of Brian Izzi from Hoquiam.  Tole would lead the rest of the distance and win his second race of the year in only his second start of the season in the Western Washington Construction/Crowell Brothers Automotive Repair #34 Camaro.

“The whole engine/race car package this year has been great,” said Tole, “my car is working really well.  I tried a new setup and just took what I got and ended up where I ended up. “

Brian Harding of Oakville was second in the Mountain Winery/Wilcox and Flegel Petroleum Supply/Bar None Construction #28 Camaro followed by the Jacknut Apparel/CNK Machine #9 Camaro of Hoquiam driver Jack Parshall.  Aberdeen’s Shane Kerrigan in his #43 Mustang was fourth and earning fifth was the Napa Auto Parts of Montesano #67 Mustang driven by Ryan Haney from Elma.  Fast time of the night was Jason Tole at 19.152 seconds while heat race winners were Tacoma’s Mike Knox in the Sam’s Auto Repair/Desperado Express #40, Harding, and Parshall.

In the Hornet division a new face was in victory lane.  Jeserae Norton of Tenino was the early leader in the Centralia Pet Resort #27 machine but would be overtaken by Brian Norton of Tacoma.  Brian would lead for much of the race in his Free Junk Metal Removal/New Generation Fitness #43 until pressure was brought on by Rochester’s Shane Turner.  Turner would take the lead on lap seventeen but would lose it on the next circuit.  Brian Norton would go on to win and became the third different winner in as many races in the classification.

Shane Turner would end his night in a respectable second while finishing behind him in third was the #7 of Devin Matthews from Tacoma.  The balance of the top five would include Willie Wright of Aberdeen in the Kerrigan and Sons Trucking #17 in fourth and the I-5 Auto & Truck/Cut Rate Auto Parts #37X of youngster Amanda Allery.  Earning victories in the heat races were Turner and Wright.

The Grays Harbor Raceway will be back in action next Saturday night June 8th.  It will be a makeup date for both the $650.00 to win Cut Rate Auto Parts 100 for the Street Stocks and $750.00 to win Shipwreck Beads IMCA Modified event courtesy of X-Factor Race Cars.  Hornets will also be on the card and the Street Stock main event will be one hundred laps in distance.  For more information log on to www.graysharborraceway.com or call the brand new Northwest Tracks Hotline at (360)-699-RACE.