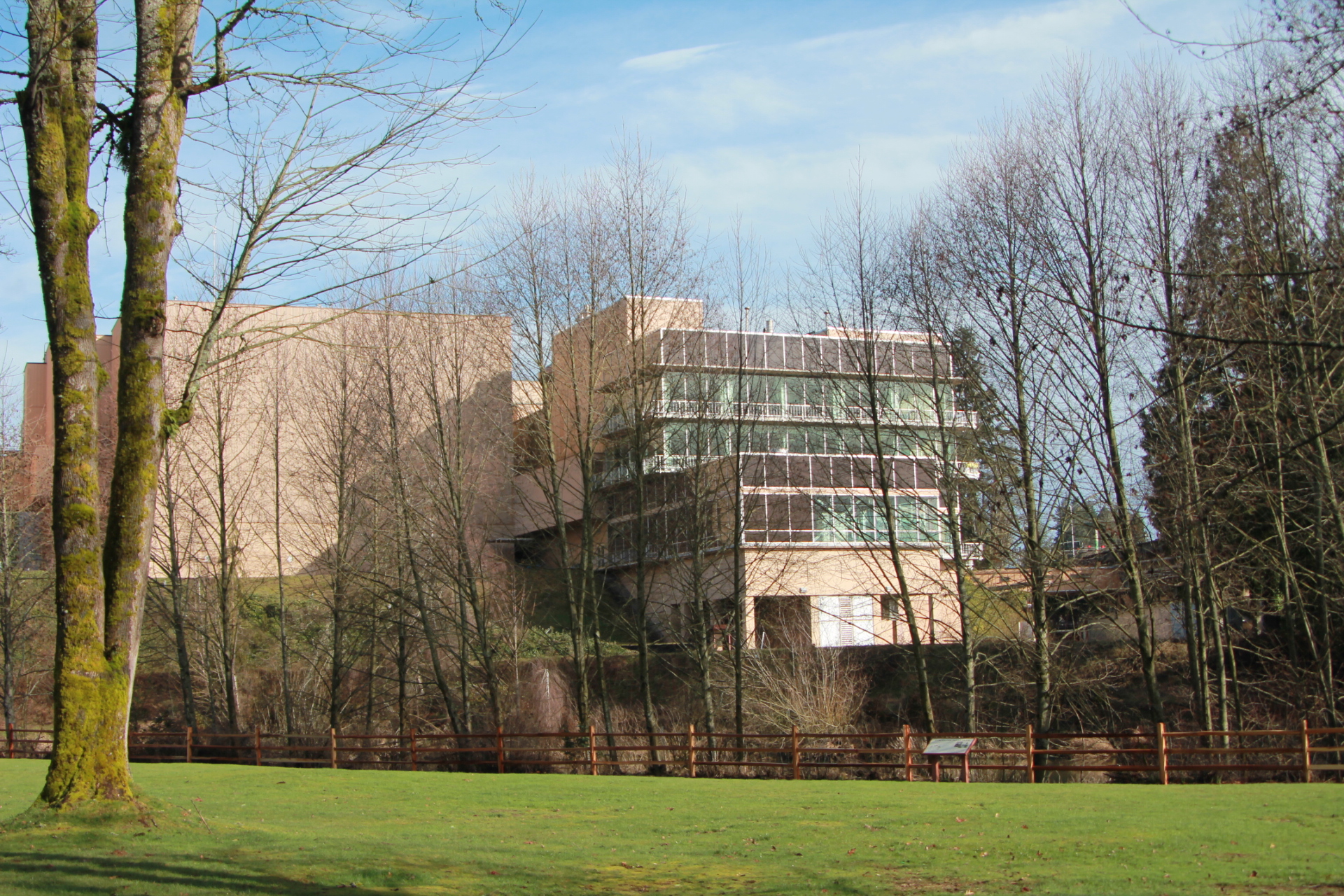 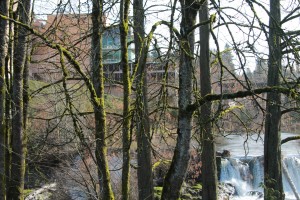 The map delineates a strange triangle.  It shows the bizarre borders between the cities of Tumwater and Olympia.  There are circles drawn around buildings with nicknames like “The Knoll” and “The Valley.”

The map is an aerial view of the Brewery District – on display to help City of Tumwater planners guide the community on a planning exercise.

The Brewery District study area includes the Safeway triangle north of the Brewery and the commercial area to the south of Tumwater Falls Park, key landmarks adjacent to brewery buildings which are slated for redevelopment.  Essentially, the district encompasses the entire commercial area around Custer Way, Capitol Boulevard, and Cleveland Avenue.

A walk around the neighborhood reveals many eateries, the City’s Old Town Center, a mix of professional offices, and various retailers—from businesses with a local clientele to those with a national reach over the internet, like the efairies.com. “For residents, this is a very active part of Tumwater and Olympia.  A lot of folks live in this area.  They shop at Safeway, eat at Pellegrino’s Italian Kitchen, and frequent businesses in the area,” says Tumwater Mayor Pete Kmet.

The Brewery District in Tumwater was identified in the City’s 2010 Strategic Plan as a significant part of the community. It is the remnant of the old downtown. A few buildings have maintained that style, with windows along the sidewalk and close proximity to the street. The area presents an opportunity to provide expanded commercial and regional services. The layout and street grid allows for the creation of a walkable district where neighbors can meet for coffee, shop for gifts, buy some groceries, or gather for a glass of wine after work. The Strategic Plan directed the City to work with the businesses, property owners, residents, and neighbors to encourage reinvestment in the neighborhood.

The City’s focus on promoting brewery redevelopment along with the new owners who are pursuing development on the north side of Custer Way make the need to plan the area around the brewery more immediate.

Doan adds, “We want to make sure that the area around the brewery properties doesn’t get mowed over by the activity at the brewery, and instead, seizes the opportunity created by that activity.”

The objectives of the current planning project are to:

2)    encourage commercial and residential investment to build on the excellent location and neighborhood character,

3)    allow the existing and new businesses to prosper,

4)    create synergistic opportunities with the brewery redevelopment, and

5)    foster a walkable and attractive design of the area that supports the neighborhood and welcomes people to Tumwater.

The City of Tumwater has convened a 14-person focus group to help shape that vision and future of this part of town. This team includes a mix of residents and business owners.

Nancy Stevenson, a member of the planning committee, moved to Tumwater in 1974, and lived on Capitol Boulevard.  “The brewery was functioning and a vital part of the community.  I could walk across the street to the grocery store, down the road to hear some great jazz in a local restaurant, or visit the tasting room for a sip of beer,” she recounts.

On June 20, citizens can come together to share their vision for the future of this neighborhood.  What do people appreciate about the neighborhood and what would make it better? What challenges currently impact redevelopment?  How do we plan for a future population that includes elderly citizens and young people?  What changes can be made to improve pedestrian safety and recreational opportunities?  These are all questions that the City of Tumwater and its partners are hoping to actively discuss with community members during an open house. 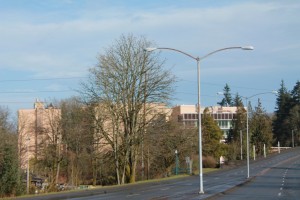 “We know the brewery is eventually going to redevelop,” says Mayor Kmet.  “We want to create a community vision for the surrounding area that includes updated zoning and land use plans so that we are prepared for this future redevelopment.”

Because the brewery property has not developed, the City is asking the community to consider the work that was done by over 700 citizens who participated in the Brewery Vision process.

“We are building on the visioning project from two years ago,” explains Tumwater planning manager Tim Smith. That vision for the future of the brewery included an active mix of retail, residential, offices, entertainment, manufacturing in the valley, and civic spaces and uses. The City hopes the community will envision a future that can complement the brewery vision and restore the activity and vibrancy that once existed in the area.

Project partners have conducted extensive research and prepared reports to share with citizens during a series of public meetings.  After reviewing the current conditions and challenges, the task force and community will look at different alternatives for the future of the area. “We are asking the community to share ideas that will set the foundation for different alternatives,” says Smith.

One of the biggest challenges facing this section of Tumwater is traffic patterns.  For example, the Boston Street bridge, just below the brewery, is a frequent path for access to Highway 101.  However it’s curvy route, limited access, and two-lane path will create issues if traffic increases.  Parking is also a problem for many of the area’s merchants.

“Despite transportation challenges, we have a transit center and 15-minute bus service in the middle of this area,” adds Smith when pointing out a positive building block for the project. In addition to the movement of vehicles, the plan will address better pedestrian access, with bike lanes and sidewalks.

Besides transportation, the focus group will explore ways to improve recreation options.  “One idea is to create a safe walking path that connects Percival Landing to Pioneer Park, or maybe even take it further out to West Bay,” explains Stevenson, while discussing options for blending recreation and historic places.

Recently, LOTT Clean Water Alliance purchased approximately 40 acres in the Deschutes Valley, which has jumpstarted the development work.  LOTT has long term plans to construct a reclaimed water facility in this zone.  “It fits into the landscape.  LOTT is also interested in shoreline habitat restoration along the Deschutes River and hopefully will be able to provide public recreation access to the community,” shares Smith.

“This area of Tumwater is very special.  It includes the Deschutes River, Tumwater Falls and a great mix of businesses and homes,” says Kmet.

It’s clear that Kmet, Stevenson, Doan, and Smith are excited about the redevelopment project and are anxious to get the community’s input.  “This area is a gem.  [Brewery] structures are identifiable landmarks along I-5 between Seattle and Portland,” adds Smith when noting the desirability for new businesses to locate in this section of town.

Doan stresses the area “has great freeway access, many amenities, proximity to the rest of Olympia and Tumwater, and is sounded by a wonderful and historic residential neighborhood. It can have a great future.”

“I enjoy living in the brewery neighborhood and I am excited about engaging the community about how we can recreate, rejuvenate, and reconnect it,” summarizes Stevenson. 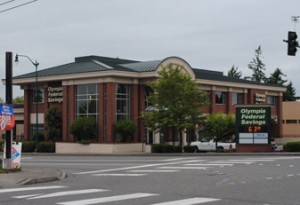