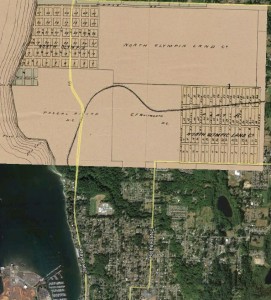 Ira B. Thomas died in Olympia on October 9, 1872. He had only arrived in Olympia a few months before. But, in his short stay here, he almost made Olympia the most important city on Puget Sound. Or, that’s at least how the story goes. In the early 1870s, practically every city on Puget Sound thought it had a chance at landing the terminus of the Northern Pacific railway.

With dreams of civic greatness within reach, each city did what they could to convince the eastern bosses of the Northern Pacific to pick their community. Olympia city father’s went as far as offering acres of tideland to be filled for the terminus. Each town also tried to look for clues on where the railway had decided to land. The most telling clue was the operations of supposed agents of the railroad buying up land.

Because once the location of the terminus would drive up local land prices, the railroad employed independent agents to try to secretly buy land when it was still cheap. In Olympia, that mysterious agent was Ira B. Thomas of New York State. Most local histories that cover the era of the Pacific Northern Railway terminus chase, retelling this particular episode (this telling from Gordon Newell’s “So Fair a Dwelling Place“):

The Puget Sound Land Company, a subsidiary of the Northern Pacific, bought up large tracts of land on Budd’s Inlet in the name of one Ira Bradley Thomas. Before the rails reached Olympia, Thomas died.

Rather than face the legal delays of probating his estate, the company quickly bought up new land near Old Tacoma and told the Northern Pacific to change its terminus to that location.

Had an obscure business man, Ira Thomas, lived just a little longer, Olympia would undoubtedly have become the western terminus of the first northern transcontinental railway and the site of the present city of Tacoma might still be a comparative wilderness.

But, Thomas died in October and the next summer, Tacoma was chosen as the terminus. Hopeful retellings of history notwithstanding, that Olympia would’ve ended up with the terminus is just wishful thinking.

If you look at the written history of the Northern Pacific  railroad’s board, it actually picked Tacoma a month before Thomas died. In those days, it took until the following summer to announce a decision made the previous fall. So, Thomas’ mission was likely one of misdirection or — at best — hedging the railroad’s bet. If Tacoma had fallen through for some reason, they’d have Olympia to fall back to.

Either way, it begs the questions of how would Olympia have ended up differently had we, and not Tacoma, ended up the first industrial metropolis on the sound? But, the exact extent of our growth would’ve been determined by exactly where on Budd Inlet the terminus was meant for. The land Thomas bought was held by a holding company, the North Olympia Land Company, for at least a couple of decades.

If you look at an 1890 map, you see a large tract of land just north of Priest Point Park labeled as “North Olympia Land Company.” With the name and the general location, this would have been Thomas’ terminus location. So, its likely that Olympia would’ve grown. It’s fitting that the 1890 map also features what would have been the second railroad to travel up the east side of Budd Inlet, but never did.

This never completed railroad in Thurston County would have followed the current path of Interstate 5 from the Lewis County line to Tumwater. It would have crossed the Deschutes River south of the brewery and gotten into Olympia through a tunnel under Capitol Way that was in fact built in the early 20th century. Once downtown, it would’ve roughly followed Plum Street, up East Bay Drive and then cut east just beyond Priest Point Park.

The plan for the new railroad was kicked off in 1890 by Union Pacific to compete with the already established Northern Pacific. They organized it as a subdivision called the Portland and Puget Sound Railroad. But, the project only got as far as purchasing right of way, surveying and grading in Thurston County before the money ran out. Only eight months worth of construction was ever put into the entire Portland to Seattle line.