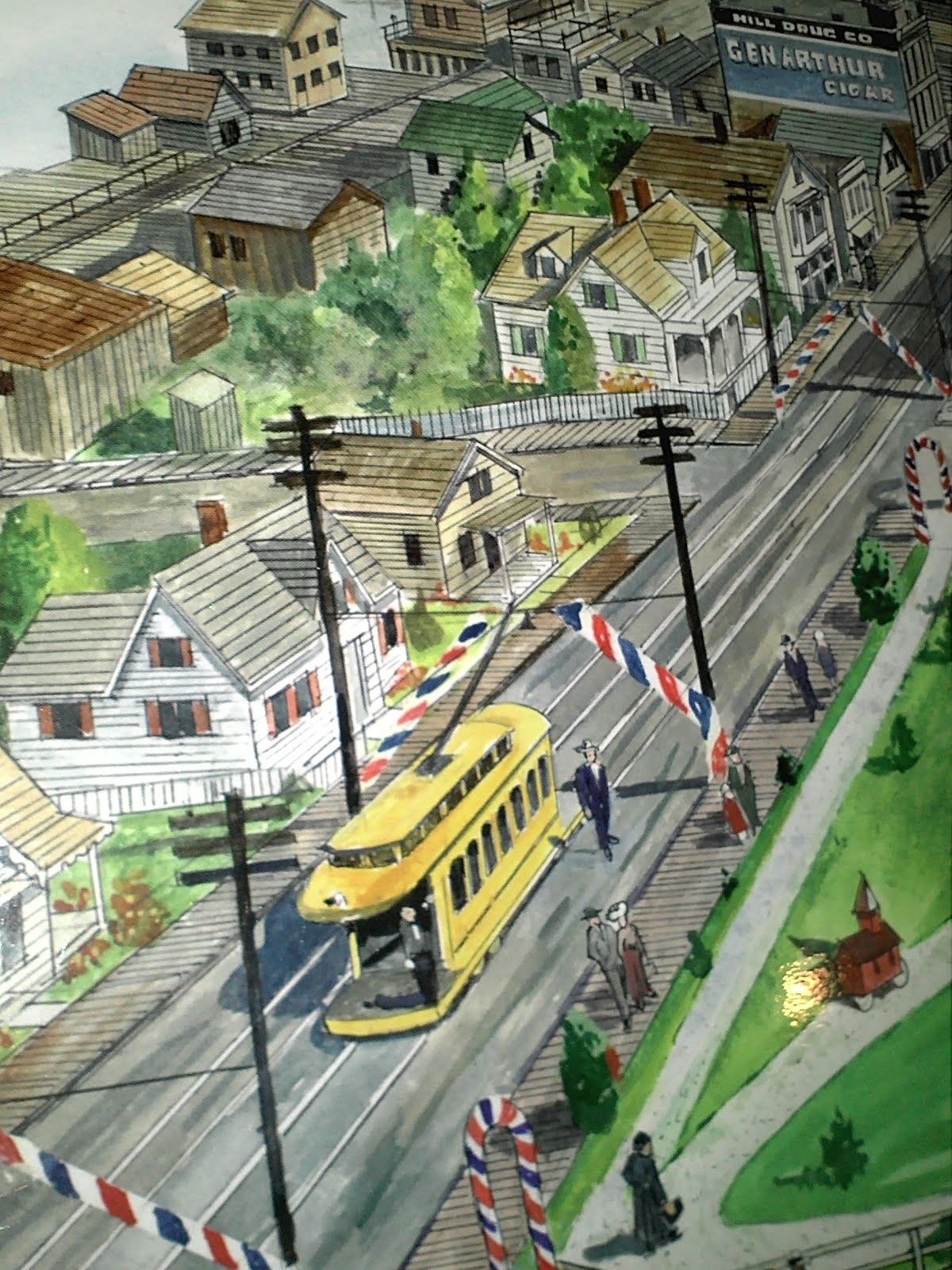 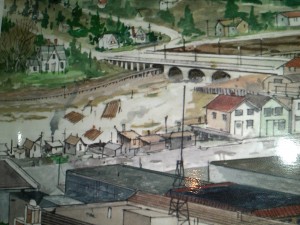 “Sylvester’s Window” is a series of historical paintings that track the history of Olympia in eight episodes from 1841 to 2001. The paintings currently hang in the Olympia Timberland Library.  The project is a collaboration between Lynn Erickson and Robert Chamberlain.

Each painting is from the same perspective, a third story window from Edmund Sylvester’s mansion on the south side of what is now Sylvester Park, on the current site of Key Bank.

This is the second in a series of features on the paintings, pointing out interesting aspects of each. (The first article can be found here.)  These won’t be all inclusive descriptions of each painting, so if you’re interested in learning more, the Olympia TImberland Library has study guide available in the reference section and for checkout.

Below is a short description of some of the events captured in the first three paintings cover 1899 through 1950. 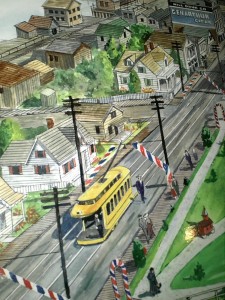 During the turn of the century, streetcars ran throughout Olympia. At their greatest extent, they ran across Olympia from the Westside (as far as Rogers) and up the Eastside. The southern terminus of the streetcar line was the Olympia Brewing company in Tumwater. The line ran from 1892 to 1933, when they were replaced by buses.

Also coming to Olympia during this era was the opera house, which stood on 4th Avenue between Jefferson and Cherry, on the banks of the then Swantown Slough. The opera house was built by the publisher of the Washington Standard John Miller Murphy, and stood from 1895 to 1911.

What we know today as the headquarters of the Office of the Superintendent of Public Instruction and call the “old capitol building,” was originally built as the Thurston County Courthouse in 1892. But, when the county ran low on funds and the state was looking for a more permanent home, it was sold for $350,000. Its most notable feature when it was constructed was a 150-foot tall clocktower on what is now the west wing of the building. As the current capitol building was under construction in 1928, a fire ripped through the building, eventually collapsing the clocktower. 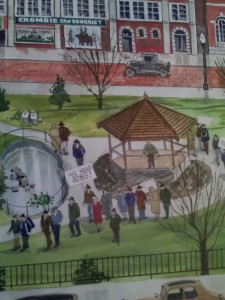 The main feature of this painting is a “hunger march,” a 1,000 person protest, demanding help from the state legislature. While this particular event ended peacefully, another protest in March did not. The marchers were corralled near Priest Point by local residents and law enforcement, beaten and forced not to approach the capitol.

Little Hollywood was a neighborhood along the tideflats between the capitol campus bluff and what we call the isthmus now. While it started as an industrial neighborhood with some squatters, its residential size expanded greatly during the Great Depression. In the mid-1930s, city officials began cracking down on squatters, forcing them out of their floathouse homes on the estuary. By the early 40s, all of the residents of Little Hollywood had been moved out.

One of the great civic goals of Olympia at the time was the digging of a canal between Olympia and Grays Harbor, probably following the Deschutes estuary to the Black and Chehalis rivers. Of course this didn’t happen, but the purpose of the canal would’ve been to make Olympia the center of shipping in Puget Sound and the coast. In addition to the effectiveness of rail and road transport, another reason cited for the never constructing the canal was the lack of rain to fill it in the summer.

Changes in highways and streets were evident by 1950, as Olympia became the intersection between Highway 99 (main west coast highway), 101 (Olympic Peninsula) and 410 (coast via Grays Harbor). During the early part of the decade a proposed path for the interstate through Thurston County would’ve taken it right under Sylvester’s nose, through a tunnel under 7th Avenue. Because of costs, that plan was shelved in favor of a path through Tumwater’s historic center. 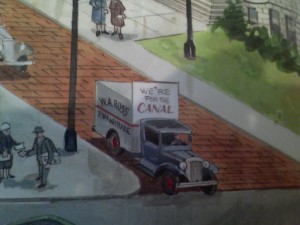 First mentioned by the owners of the Olympia Brewery in the 1890s, the damming of the Deschutes estuary had long been a goal by local boosters. Early purposes included making shipping easier to Tumwater, but also included floating logs for a proposed mill and creating a freshwater port. In 1911, the architects of the current capitol campus included a lake in a drawing of how Olympia should accommodate the new capitol. An Olympia area politician also proposed damming the Deschutes in 1915 to create an easy route to the Westside. In the late 40s, after a decade of intense lobbying by local officials, Capitol Lake was finally constructed.

References and more reading
Site of Olympia Opera House
The Old Capitol Building continues to serve
It’s Not Just The Water: The life and lies of Olympia residents during the Great Depression Years
Imagine a Canal via McCleary
Deschutes estuary history