It’s widely accepted that real estate agents have a flexible work schedule.  While an agent may have long hours on the weekend, holding open houses and showing homes to prospective buyers, their overall work schedule is often admired by the nine-to-five crowd.

“Every agent at Van Dorm Realty is giving back to the community,” explains owner Jeff Pust while showing me a tremendous list of local organizations that receive support from at least one Van Dorm agent.

This list is very long.  So long, in fact, that I have to strain to read it since the font is small so that the names of the organizations all fit to one page.  I will admit to never hearing of some of these groups, but that’s one thing that’s so wonderful – the diversity of the organizations is tremendous. 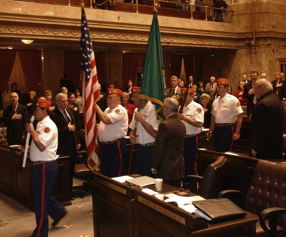 Take Paul Klenk, a Van Dorm real estate agent, who has been a little league baseball coach for years.  “I was always the parent, out on the field throwing the ball around with my kids’ teams,” describes Klenk fondly when reflecting on his years as a youth baseball, fast pitch and wrestling coach for his children’s teams.

Klenk’s kids are older now, with sports abilities far surpassing his coaching skills.  For the past six years, Klenk has supported the Marine Corps League.  Klenk describes the group as a “bunch of old guys that get together to joke, laugh, and coordinate the local Toys for Tots program.”

Klenk’s role is to secure available real estate to collect, organize, and distribute the toys.  With over 100 volunteers, the Marine Corps League collected a 10-foot wide by 10-foot tall stack of toys last year.  A brand new toy was distributed to over 2200 local kids in over 1000 families.

“Van Dorm is packed full of agents who are contributing to different organizations.  Most people volunteer consistently, year after year, because they like to see a bright look on someone’s face when they have received help,” comments Klenk.

In her seventh year with Thurston County 4H, Pust is emotional about her role in this organization.  “I have been with these kids for a long time.  I have watched them set and achieve goals, make public presentations, and compete with their animals,” says Pust with teary eyes.

“4H places a tremendous emphasis on community services.  Kids that go through the program become contributing members of society,” adds Pust who is proud of her role in contributing to these kids’ success.

The South Sound YMCA will be the first to tell you that their youth sports programs are successful because of parents that volunteer to coach.  One of those parents is Kent Stottlemyre, who started coaching his son’s Y basketball team years ago.

For thirteen years, Stottlemyre has coached his son’s baseball team and has also served as a coach for his daughter’s softball team through Thurston County Fastpitch Association.

“I enjoy teaching the kids and participating in their learning.  I like to see them achieve, especially in softball.  It’s very rewarding to watch a kid who is not hitting when the season starts to be smacking the ball by the last game,” describes Stottlemyre.

“Our agents are all in different stages of their life but their career enables gives them the flexibility to give back to the community,” comments Pust.  “I think that we have a volunteer in every school in the county.  Someone is serving in some capacity in just about every group in town.”

“Real estate agents have a unique role as a volunteer.  We have flexibility during normal work hours to handle tasks that may not be open to other volunteers,” summarizes Pust.