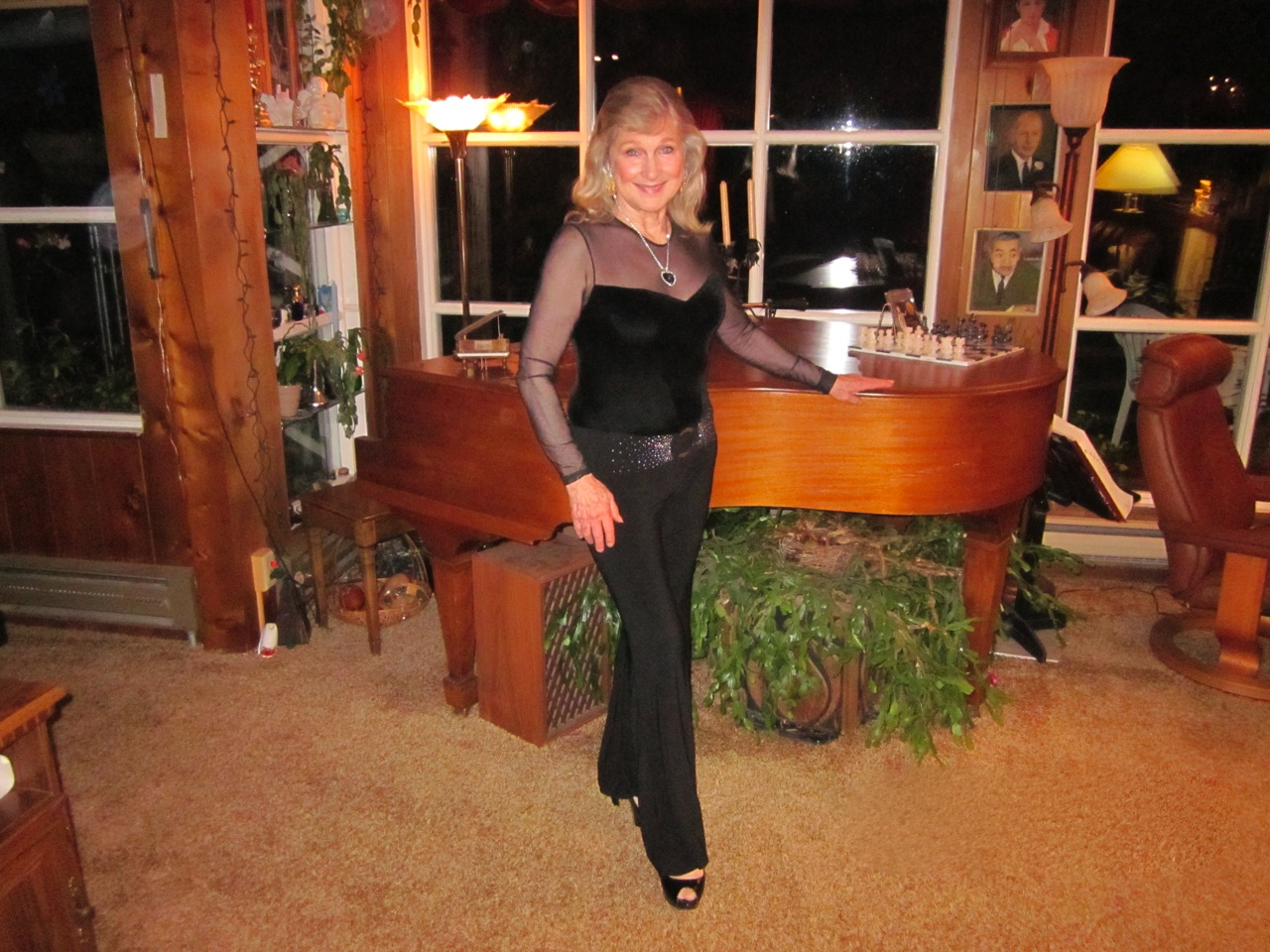 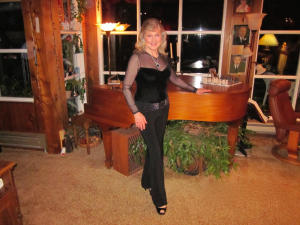 Teenagers in the late 1950s and early 1960s swooned to fairy tale romances retold in song.  One of the architects of that music was a student at Olympia High School, Gretchen Christopher, founder, and lead singer with The Fleetwoods, who recorded the iconic songs “Come Softly to Me” and “Mr. Blue.”

“I’ve had a fairy tale life,” she said, “but sometimes my life took turns that didn’t fit with the fairy tale.”

What does fit with the fairy tale is that 38 years after breaking up with the love of her life she reconnected with him in 1997 — and they have been in a committed relationship ever since. What also fits is that close to half a century after her first hit song, she recorded her first solo album, “Gretchen’s Sweet Sixteen (Suite 16).”

“I was 16 when I first fell in love,” she said. She was a cheerleader (unprecedentedly in both the 7th and 8th grades) at South Bay Grade School and then at Washington Jr. High School in her freshman year, before matriculating to Olympia High School. Her parents were active in the local arts. Her father, Ian Christopher, played with the Olympia Symphony Orchestra, and she said her mother, Helen Christopher, helped start the Olympia Little Theatre and the Washington Center for the Performing Arts (click here for more family history).

Her friends arranged a blind date with a kid named Dick Vosburgh – she has always called him Vos. They fell in love four or five months after that first date and went steady throughout her junior year and his senior year. Meanwhile, fame came calling.

She was still innocent and still in love with Vos, but her career played havoc with her love life. “Being a teenager in love was too complex,” she now says. “I broke up with Vos. I said to him, ‘Maybe we’ll meet again sometime and fall in love again.’”

Gretchen wrote a song called “Come Softly.” She teamed up with fellow singers and classmates Gary Troxel and Barbara Ellis to form a trio called Two Girls ‘n’ a Guy. They blended Gretchen’s song with a contrasting jazz riff Gary had made up and performed it a cappella at a school assembly. The kids at school loved it and asked if they could record it, which they did on Gretchen’s father’s reel-to-reel tape.

Gretchen took it to Seattle record promoter Bob Reisdorff. He started his own label and began professionally recording them right after they graduated. Two Girls ‘n’ a Guy became The Fleetwoods (after Olympia’s first telephone exchange), and the song, renamed “Come Softly to Me,” released in the new year, 1959, became a top five R&B hit and a Billboard Number One Record, the top Pop hit in the nation.

Other hits quickly followed, including “Graduation’s Here” (written by Gretchen and Barbara for their OHS graduation party), “Mr. Blue” and “Tragedy.” When “Mr. Blue” topped the charts, The Fleetwoods became the first group in the world to have two number one hits on The Billboard Hot 100 in a single year. They went on to have a total of 11 songs on the Billboard Hot 100 charts.

Gretchen was 19 years old when The Fleetwoods first appeared on Dick Clark’s show, telecast nationwide from New York. After the show her uncle, William P Gray, Jr., took them out to the Copacobana to see Sammy Davis, Jr.

While her singing career may have taken her to “American Bandstand” and Hollywood, her heart remained in Olympia, where she still lives in a beautiful old home on the water’s edge overlooking the West Bay where she is often visited by her children, who also live in Olympia. Her home is over 100 years old and sits at the bottom of a hill so steep that when it snows she has to park at the top of the hill and walk. A dining nook overlooks a deck and the bay. In her living room there’s an old oak walnut grand piano and a smaller ebony keyboard. A display case holds album covers, posters and, nearby, photos of Gretchen with music stars such as Dick Clark (and Dick Van Dyke with her sister Sonja) and Roy Orbison.

She was married twice, once very briefly and then for 14 years to Richard Matzen. They married in 1965 and divorced in 1979. She says that throughout the years she realized that stardom, gold records and Hollywood were not enough. “I realized I needed one good man.” 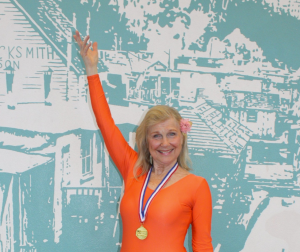 For many years Gretchen taught dance at both St. Martin’s College and The Evergreen State College, and she continues to perform both locally and around the country.

After performing in Europe, 38 years after her OHS graduation, Gretchen was the subject of a feature story in The Olympian.  A subscriber sent it to a son in Orange County, California, in 1997, and he wrote to Gretchen c/o TESC, where her dance classes were the nucleus around which their Leisure Education program was formed and thriving. She received the letter. It was from her first love Vos, and they got back together. He said at the time that he thought he had lost her because he was jealous of her career and that, if he ever had another chance, he would not make that mistake again.

From 2004 to 2007 she recorded the solo album “Gretchen’s Sweet Sixteen (Suite 16),” which was one of Billboard Critics’ Picks for 10 Best Albums of the year. It is a concept album, which took three and a half years to write, record, and produce on her own new label. It’s a love song to Vos, and a recapitulation of her singing career. The album title celebrated her 16th leap year birthday (she was born on Leap Day, Feb. 29, 1940). The album also celebrated her reuniting with her first love whom she had met at age 16. Naturally there are 16 songs in the album, 16 pages of liner notes and photos, and, furthering the theme, the album sells for $16.99 at www.GoldCupMusic.com, where one can hear sound clips. Included are new songs and new versions of Fleetwoods hits “Come Softly” a cappella, “Graduation’s Here” (with The Fleetwoods, today), “Come Softly To Me,” “Time of Love” and “Blues Go Away.” 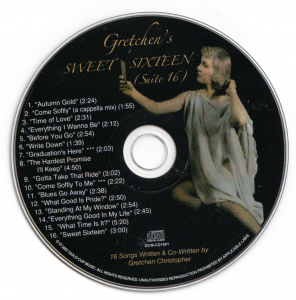 Today she says, “the computer takes up way too much time, and even so, I am not able to keep up with the thousands of emails that come in.  Some have to do with music business, some are messages from fans and those seeking autographs, photos, and donations for fundraisers. I was delighted when my signed CD (Suite 16) brought $100 at an auction raising funds for OHS Parents of Graduating Seniors. Their goal is to provide a safe celebration for the graduating seniors. I should do a concert at OHS, sometime, for (although I don’t know if the students are aware of it) we Fleetwoods are among the 2005 inductees to Olympia High School Alumni Hall of Fame.

Recently, she enjoyed being asked and serving as a presenter for the first-ever Oly Music Awards, which took place at the Capitol Theater.

“To have my children and their families so close, and living here in Olympia, is one of life’s greatest blessings,” Gretchen says.