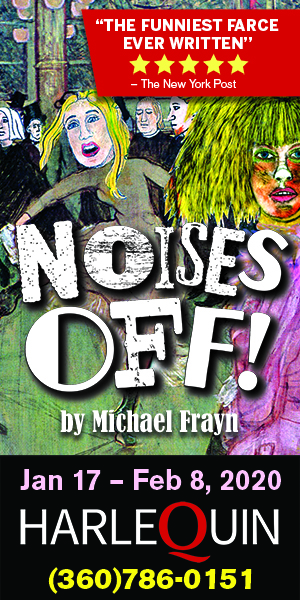 WHAT: Harlequin Productions presents Noises Off, Michael Frayne’s uproarious farce-within-a- farce, directed by Corey McDaniel.
WHEN: January 17 – February 8, 2020
WHERE: State Theater, 202 4th Ave East, Olympia, WA 98501
TICKETS: Tickets are available online at harlequinproductions.org, by phone at 360-786-0151, or in person 12-6 pm, Tuesday-Friday and 2 hours before performances at the Harlequin Box Office in the State Theater.
General admission tickets are $36 Senior 60+/Military $34 Student/Youths Under 25 $20 Rush Tickets (half-hour to showtime) General $18; Senior/Military $17; Student/Under 25 $10
Called “the funniest farce ever written,” (Clive Barnes, The New York Post) Noises Off presents a hilarious behind-the-scenes peek at an acting troupe rehearsing and performing the comedy “Nothing’s On.” After barely making it from final dress rehearsal to opening night, things quickly deteriorate during the run, culminating in a closing night disaster that threatens to jinx the old saying, “The show must go on.” In three acts: Act One, Act One, and Act One.

Noises Off is very, very funny, but it’s also a rather accurate depiction of the tempests, dramas, heights and pitfalls endemic to the backstage world of every theater. Perhaps that’s why, as director Corey McDaniel notes, it’s one of those plays most actors and directors itch to perform.

How to Support Local Thurston County Farmers Year-Round, Even in the...

I’ve grown into the habit of taking more care in reading labels and packaging, really learning where my food comes from and buying local...

The Evergreen State College Longhouse Celebrates its 25+1 Anniversary of Supporting...

Where to Get Chinese Food in Olympia and Throughout Thurston County