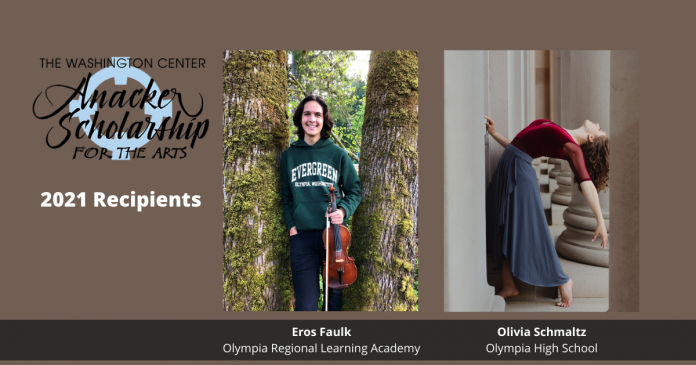 Submitted by The Washington Center for the Performing Arts

Eros Faulk attends Olympia Regional Learning Academy and plans to attend The Evergreen State College to pursue audio engineering and music production. Faulk began playing piano at age two and violin at age three. He has recorded and released three albums, the first at age 13, which has received praising reviews from music critics in the USA and Europe, including some of the most experienced Irish music critics in Ireland (Irish Music Magazine). He has also worked on several solo recording projects and performed at NW Folklife, Wintergrass Festival, and at The Triple Door.

Olivia Schmaltz attends Olympia High School and plans to attend University of Utah in the fall to study modern dance. Schmaltz began dancing when she was three years old and has been instructing dance in addition to running track, extensive volunteering, and maintaining a 3.96 GPA.

The Anacker Scholarship recognizes, encourages, and supports a Thurston County Scholar’s study in the field of the arts. Jill Barnes, Executive Director, says, “We were so impressed with this year’s applicants. Recognizing the financial difficulties COVID-19 has brought to artists and arts organizations, we are delighted to provide not one, but two $1,000 scholarships this year.”

The Washington Center for the Performing Arts is a not-for-profit performance venue with a mission to inspire audiences and artists of all ages through live performances, enriching the vibrancy of our community.