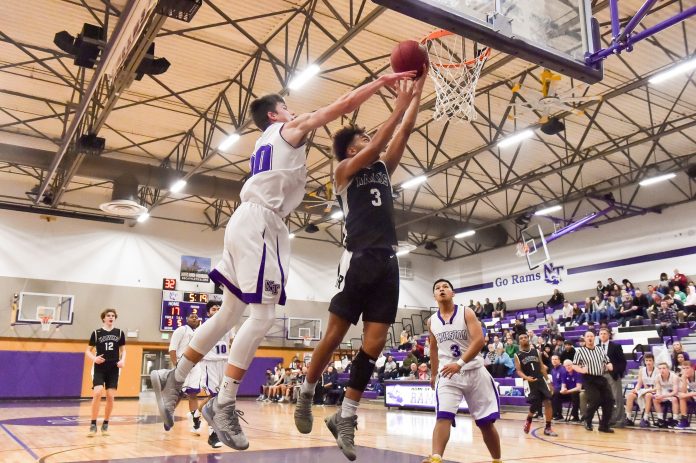 The River Ridge Hawks defeated the North Thurston Rams 50-42 Saturday, December 29 in WIAA boys basketball in Lacey at The North Thurston Holiday Tournament. Junior 6′ 4″ Forward Derek Carroll led the Hawks with 18 points going 7/9 from the field and 1/1 from the three point line. Senior Tim Tenklay led the Rams with 16 points.

River Ridge head coach Pat Williams was happy with the win. “I thought our boys played very hard tonight. We are just trying to look for some good attitude and effort and I think tonight we got it”.  The win for River Ridge was a great response after losing 75-62 Friday to Olympic.  River Ridge (4-8 overall, 1-3, SPSL 2A) heads to Tyee next Friday and North Thurston (4-7 overall, 2-3, SSC 3A) hosts Central Kitsap. Both teams finished 1-1 at The North Thurston Holiday Tournament. North Thurston defeated Tumwater High School 72-63 on Friday. Olympic defeated Tumwater Saturday 68-64 in the first of the two games played.