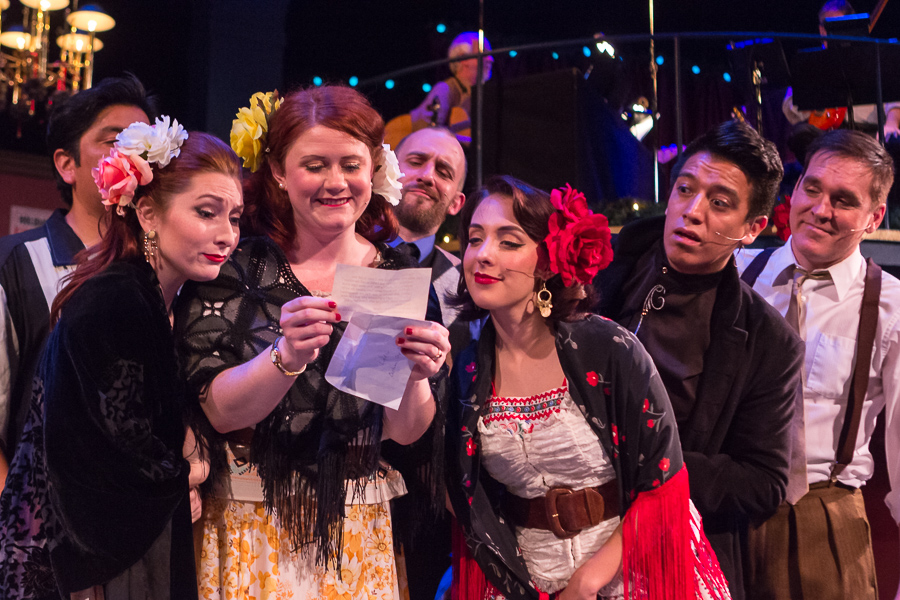 Since 1994, Olympia audiences have been treated to the magical musical storytelling of Harlequin Productions’ Stardust holiday shows. There have been 21 annual episodes of this narrative musical comedy set in the fictional Stardust Club of Greenwich Village, New York. Since its beginning, 1997 was the only year that Harlequin didn’t put on a Stardust show, being the year they were renovating the historic State Theater. Until 2013, the Stardust shows were set to the soundtrack of 1940’s American pop music. 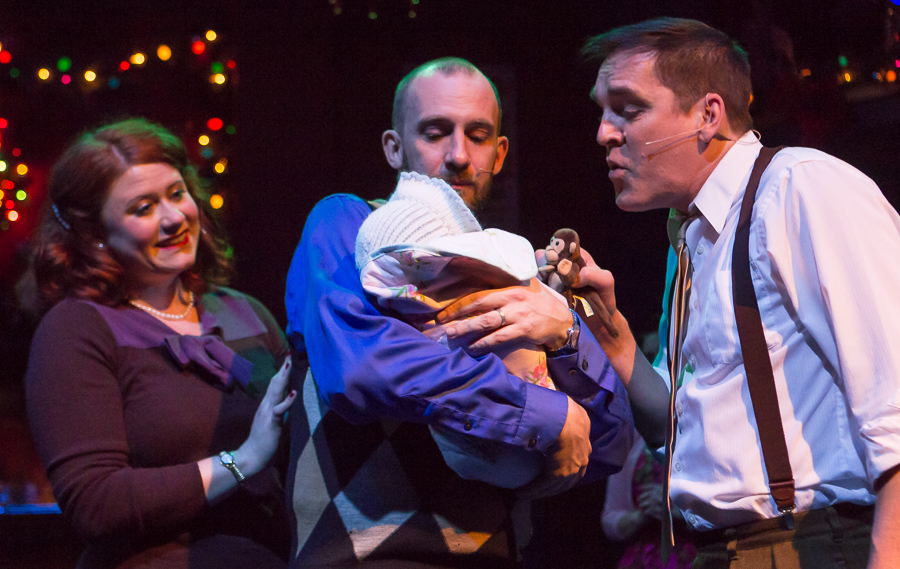 Stardust director Linda Whitney recalls that incorporating the music of the ‘40s seemed a natural decision at the time, but eventually began to make less sense as the years went on:

“One of the reasons for the early popularity of the show in the late 90s was that a lot of aging folks were enjoying this era of music from their youth and they could bring their families and share that with them. Also, this was the time of the swing craze. Lots of people were swing dancing, we had swing dancing in the shows, and it was a lot of fun. But that audience began to fade out. We had been in the 1940s for longer than there were 1940s. We had performed over 200 pieces of music from that decade.”

In 2013, Harlequin again took a break from writing its own holiday musical and instead produced A Christmas Survival Guide. That decision was met with immediate feedback from Olympia audiences.

“Attendance dropped way off, because it wasn’t Stardust,” explains Whitney. “So we had to go back to Stardust in 2014, but we decided to move it into the 1950s. So we started in ’57. That phase of popular music in the 1950s as it moves into real rock-n-roll is really, really fun. Whereas the music in the ‘40s had a lot of sentimental ballads, by moving it into the 50s, we could get it into more bouncy music, and it would connect with that next generation of people.”

Stardust playwright Harlowe Reed explains that this year’s “Fandango is the 5th since we’ve moved into the 1950s.” Reed, generally elusive, was gracious enough to give us more insight into the writing process.

“We have covered all kinds of topics and people within the formula of the show. But my feeling has always been this: if we’re going to originate a show, let’s try to give it a little more meaning and interest other than just a musical comedy variety show – let’s try to have something going on, on another level,” continues Reed. 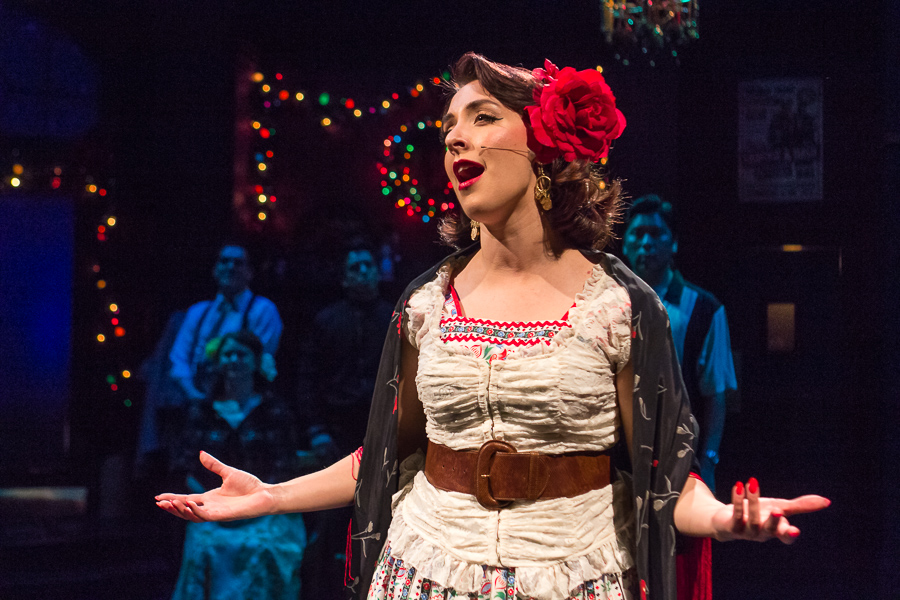 This year, the play centers around the musical duo of Frankie and Nash, played by Miguel Pineda and Jeff Barehand. The main conflict is that Frankie (Miguel) is upset about his family’s forcible removal from their ancestral home at Chavez Ravine, California. This historically Mexican-American land was bought for development in the 1950s, and eventually turned into the site of Dodgers Stadium. Frankie’s Native American musical partner, Nash, aspires to a philosophy that is more akin to rolling with the punches.

When we enter the story of the Stardust Fandango, Frankie and Nash have just come off a national tour at the height of their success but are on the verge of breaking up the act. The familiar Stardust crew has Frankie and Nash booked for their holiday show, so they, of course, are trying to keep them together.

In addition to that primary story, a secondary plot is going on as well. A beautiful movie star shows up at the Stardust wanting to meet Frankie to convince him to play the lead in a film about Jose Morelos who was a Mexican revolutionary hero.

“The producers want her to cast Marlon Brando, but she feels strongly that she wants it to be played authentically by a Mexican actor,” explains Reed. “This beautiful woman is married to a very successful film director, and she is tired of being an ornament when she has a very good mind, and things she wants to do.” 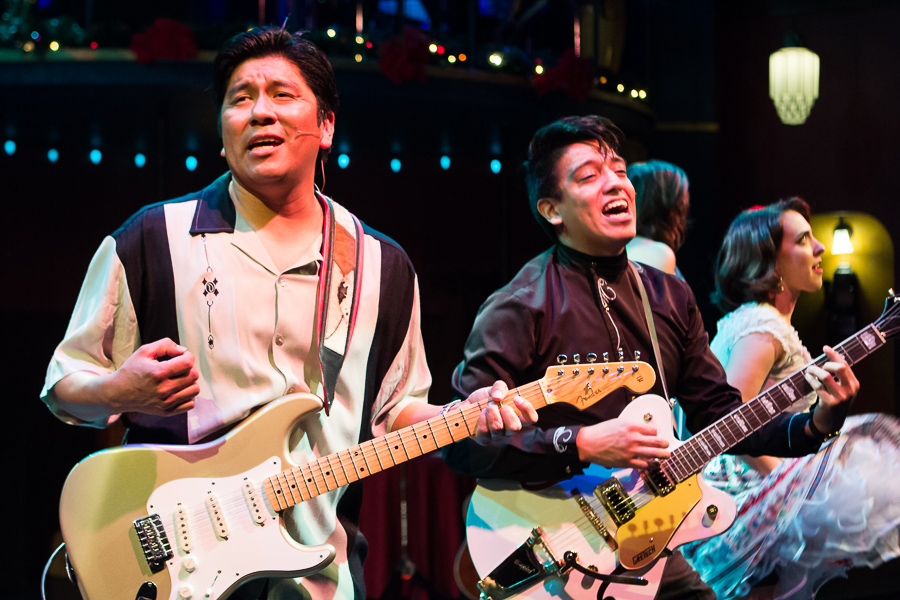 Of course, along with these comedic plots, the regular Stardust crew is back again in their home club and going on with their lives as well. The set for Stardust has gone through two remodels, but it has been the same club every year. When people come to watch Stardust, they are also coming back home to their own holiday music club. This familiarity is what Stardust audiences keep returning to experience.

“As all these years have gone by, there have been teams of actors that will do it year after year for four or five years. Christian Doyle has been in several Stardust productions, and this will be his 6th. And Maggie Ferguson-Wagstaff will be starring in her 5th production. This particular group of Stardust regulars have hung together the longest of any group,” recalls Whitney. “The charm of that is that people come year after year seeing their old friends. They’re the same characters, they have relationships, romance develops. The Christian and Maggie characters have fallen in love, gotten engaged, gotten married, and now they have a four month old baby.”

And the romance doesn’t always stay in the fictional plot. “It seems every year we have someone call in wanting to arrange to propose to their girlfriend,” explains Whitney with a chuckle. These real-life romances are certainly welcome, as there are ways to fit them into the regular announcements and raffle drawing times.

Maybe you’ve grown up in Olympia and are looking forward to attending Stardust with your family, as you have for the past two decades. Or maybe you’re new to town and ready to start a holiday tradition of your own. Either way, The Stardust Christmas Fandango is sure to be a fun evening for the whole family. Whitney and Reed both agree that one thing is always a sure bet for a Stardust show:

“Back in ‘93, we wanted to do something a little off-side, a little crazier, that could touch on social issues without being heavy handed, and wind that all up into a happy ending. That’s the one guarantee for Stardust—it will always have a happy ending.”