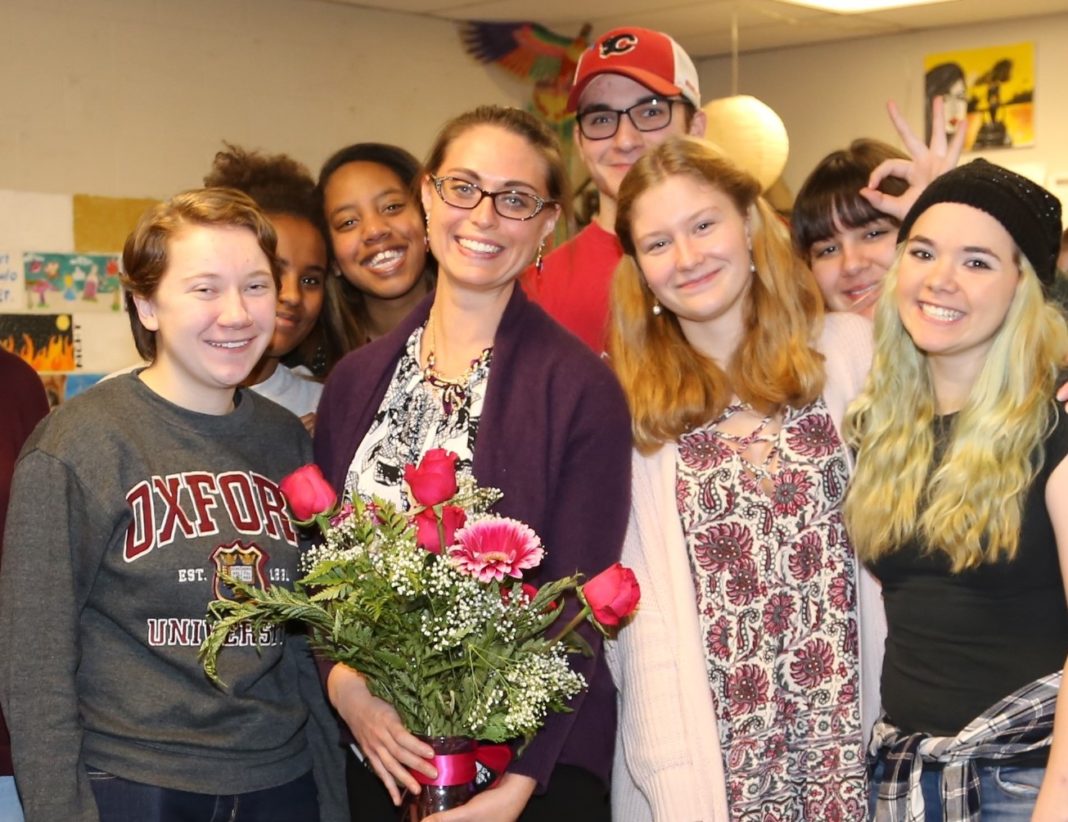 In January Amy Solomon-Minarchi began her role as Olympia’s first poet laureate. A poet laureate is a position in which a designated poet helps promote poetry as an art form in a community. This community can be as large as a country or as small as a city. States also have poet laureates. The “laureate-cy” in Olympia was begun by former mayor, Stephen Buxbaum, who was a supporter of the arts in the community. When Mayor Cheryl Selby came into office, she wanted to continue what Buxbaum had begun. They wanted a “champion” to bring together old and new writers and different writing forms.

In Olympia the visual arts are represented in local café art and in the murals on downtown buildings. However, community leaders noticed that the written arts are not as strongly represented. Many Olympia-based writing groups and individuals also came together to help establish the poet laureate position. The Olympia Poetry Network, Brian McCracken of Old Growth Poetry Collective and Susan Simons at Evergreen State College, who is a member of the Olympia Poetry Board established a goal for the laureate and set up an application process. They sent it out in September, 2016, and by November Amy knew she had been selected. As Amy told me, “It’s interesting to be the first one, because there’s a lot of pressure…and no pressure at all.”

In addition to her role as Olympia’s poet laureate, Amy is a wife, mother and high school teacher. She was especially busy during April, National Poetry Month.

There was the third annual Slam Poetry competition hosted by the Old Growth Poetry Collective at the Women’s Club on April 13. During the slam, poets are battling it out to decide who forms the team that will compete in Washington, D.C. Amy, Tod Marshall, the Washington State poet laureate, and Los Angeles poet, Matt Sedillo, performed as well.

During Olympia’s Spring Arts Walk Amy lead a “Writing to Art” workshop where participants met at the steps of City Hall and walked to the Farmer’s Market, being inspired along the way and working with Amy to craft their own poetry.

Another Arts Walk project was titled “Writing in the Rain.” On April 10, Amy collected poetry submissions about nature and art. She choose several of these to be painted onto a sidewalk with a wax sealant. This way, the poems will not be visible when the pavement is dry, but, when it rains, the spaces painted with the sealant will be the only dry sections of the sidewalk, and the poems will pop out.

Amy also worked with the Community Youth Services Inkwell program this month to provide at-risk youth with opportunities to work with writing as an art. She is also beginning to make plans for summer poetry events.

Amy came to Olympia in 2008, and the city’s unique vibe and individual character has rubbed off on her. She hopes to create a poetry anthology that is “uniquely Olympia.” It will chronicle Olympia’s shift over the years and what it is like to be a long-term resident or new community member; the people who make Olympia what it is. Amy really likes Olympia, and sees it as a dynamic community with lots of art and opportunity.

Amy completed her undergraduate work at Rutgers University in New Jersey. At that time she was surrounded by a tight-knit writing group. They “[fed] off each other with [their] ideas and workshopping.” This kind of a community is important to Amy as a way to hone her writing craft.

When she graduated from college, Amy no longer had that writing group to work with, so she began to do a lot of self-writing while looking for a new group. Her fiancé (now husband) was in the Army, and while he was deployed to Iraq and even after he returned, she wrote primarily about what she was going through. It is all from her perspective, and she feels she cannot do justice to the soldier’s point of view. However, she can internalize the stories and “try to express the empathy and confusion that goes into the sacrifice.” Amy says her purpose in continuously writing has been to understand her life in a small way, while coming to a bigger understanding about her community and life.

This is Amy’s fifth year of teaching English and creative writing at North Thurston High School. Amy feels teaching provides a relationship in which she needs her students so she can teach and help them tap into their creativity while listening to them. In this way the adolescents can be heard and Amy and her students can draw upon their combined talents.

Along with working with the community at large, Amy and the drama and art teachers at North Thurston High School pull together their resources to put on a Spring Art Showcase. They create a gallery for the students to act and explain their creative work in all mediums. She says there is a wide variety of students who participate; those who have honed their craft, and those who take proud ownership of what they have put so much effort into. Either way, all the students feel accomplishment in having their voices heard.

Amy has poetry published in various print and online anthologies. She received the Herzberg Poetry Award at the height of her college career. She has a poem that was published by the Poets Against the War organization. She finds this significant, because it answers questions about whether poetry has power. Amy believes it does, “when it comes together in a meaningful, peaceful way as social art beyond politics.”

That is one of Amy’s goals as the poet laureate of Olympia. She wants to help young people because, “art and writing is where teenagers can find a voice—the power to do good things.” She also wants to work with the established, already-out-there writers, and help inspire people to begin writing because “writing helps us find balance in our lives.” She wants to get these writers connected so they can support each other and develop their writing skills together.

During the Month of August, Feel the Heat of Grilled Hatch Chiles at Ralph’s and Bayview Thriftways

Indoors, Outdoors, Rooftop and Sidewalk Dining: It’s Your Choice at The Park Side Cafe