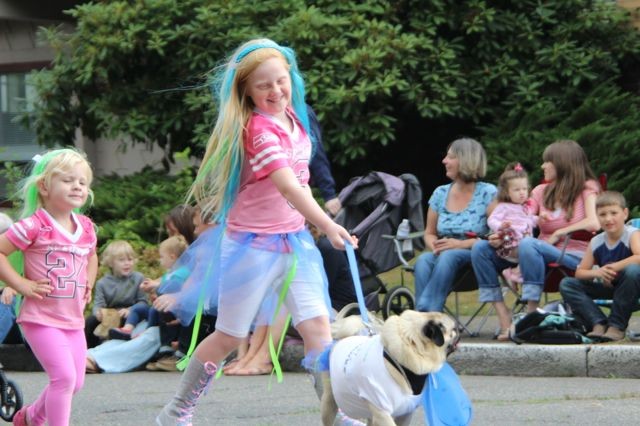 Almost 150 years ago, George Eliot said, “animals are such agreeable friends—they ask no questions; they pass no criticisms.” Like her longstanding truth, the annual downtown Olympia Pet Parade has been a more than agreeable annual highlight for nearly 90 years.

This year’s theme is ‘Pets in Space’ and no registration is required. Entrants under the age of 18 can simply show up with their pet for judging, presentation of ribbons, and parade entry. Line-up begins at 8:00 a.m. on Saturday, August 20, at downtown’s Heritage Park at Fifth and Water Streets, with the parade setting off at 10:00 a.m.

Prizes this year will be determined based on several categories. Grand prize awards will be given to best entry by a child, boy, girl, family, and group. There will also be prizes for big dogs, small dogs, floats, impersonations, wheels, and pets.

Once underway, the Pet Parade will follow a six-block route through downtown Olympia before ending at Sylvester Park where free pet-themed goodie bags and ice-cream are given to each participant.

Former long-time Olympia resident Jeannette Lindseth remembers the Parade fondly; “I loved the pet parade as a kid. We looked forward to it each year, especially trying to decide how to dress up. One year my little sister took her stuffed kangaroo, I walked my puppy Sparky, and one of my friends even brought her favorite chicken, a little red hen. The hen’s name was ‘Princess’ which goes to show that kids are still the same. Thirty years later my daughter Sophie names everything Princess!”

Her sister Lisa Anderson agrees, laughing, “I brought a stuffed animal because I didn’t have a live one, and they still welcomed me…even though I felt like a dork!”

The Pet Parade is free to anyone wanting to participate and often includes more than just patient dogs and cats. In past years there have been llamas, snakes, lizards, hamsters, and many varieties of birds. These are often incorporated, with varying degrees of success, into creative costumes, carts, props, and decorations.

As a side note, make sure your pet is securely leashed, enclosed, or contained. When marching two years ago, our pet hamster’s wagon lost a wheel and she popped out of her cage. Thankfully Hammie was returned to the safety of her enclosure without incident but the event can be chaotic to young or easily frightened animals. Have a plan B ready, just in case.

This year’s temperature is expected to be 90+ so pack sunscreen, water bowls and bottles, and read up on the Humane Society’s tips on keeping pets safe in the heat.

Donations of pet food will be accepted at the sign-up desk to benefit Concern for Animals, a local rescue helping animals in need across Thurston, Mason, and Lewis counties.

The American Veterinary Medical Foundation reports that “there are approximately 70 million pet dogs in the U.S. and 74.1 million pet cats…[and] six-out-of-ten pet owners, or 63.2%, considered their pets to be family members.” What better way to celebrate community and family—of the two and four-footed variety—than with the perfect summertime trifecta: parades, ice-cream, and sunshine!

Thrifty Thurston highlights inexpensive family fun in Thurston County. The weekly series focuses on family-friendly activities throughout our community. If you have a suggestion for a post, send us a note at submit@thurstontalk.com. For more events and to learn what’s happening in Olympia, Lacey, Tumwater and the surrounding area, visit our complete event calendar.