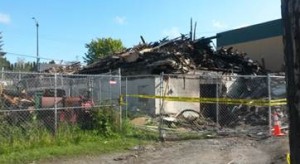 In the early morning hours of April 20, the Olympia Fire Department responded to a structure fire at 911 4th Avenue East. Once the fire was extinguished and the area fenced off by building officials, this matter was turned over to the City of Olympia Police Department for follow-up investigation.

This particular building was an abandoned structure with a history of transient camping and activity. At the request of the Olympia Police Department, Search and Rescue K9 teams from Pierce County were called to the scene to search for any other signs of potential human victims. Those K9 teams found signs that suggest there is a probability of human scent present at this site. 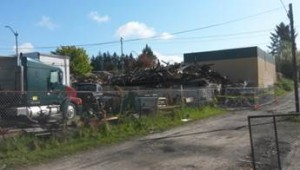 At this time, this fire site remains under law enforcement protection for further investigations and on-going excavation. The site is contaminated with very large amounts of debris and hazardous conditions and will take specialized contractors to remove the debris.

The Olympia Police Department is working with the City Public Works Division to begin excavation of this site.

Olympia Detectives are requesting anyone with information on any occupants that may have been present in the building at the time of the fire to contact Detective Bryan Houser at 360-753-8413 or Sgt. Sam Costello at 360-753-8205.

To read more about the April 20 fire, click here.