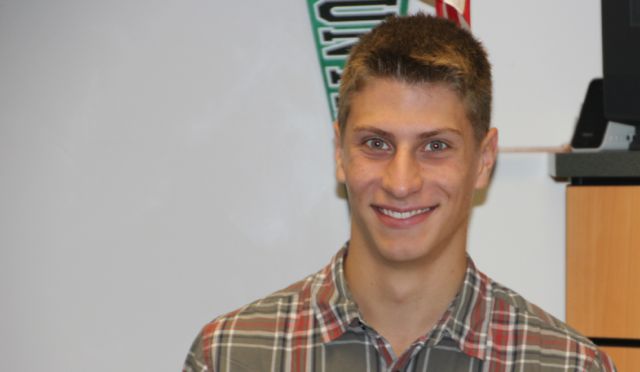 Dredging up his go-big or go-home gusto, Evan Taylor reached for his telephone and made an unlikely call to a TV celebrity, ready to ask for a favor.

Taylor wanted to know if Bill Stainton, producer of the award-winning TV comedy Almost Live, would be the keynote speaker at the upcoming Future Business Leaders of America (FBLA) conference that will be hosted by Olympia High School. To Taylor’s surprise, Stainton said, “Sure.”

“I just decided what the heck, I’m going for it,” Taylor said. “The mentality we’re trying to take on this year is that nothing is out of our reach.”

Armed with that gutsy “let them say no” mentality, Taylor landed a big-name motivational speaker for the FBLA regional conference that will be hosted by OHS on November 4 and held at the Little Creek Casino Conference Center. Usually, the regional conference has 18 schools from southwest Washington attend, averaging about 300 students. Taylor is hoping for over 700.

Just three weeks ago, Taylor first made his phone call to Stainton’s agent and things came together quickly. With some bargaining through an exchange of emails and phone calls, Taylor got the unexpected yes.

“It was a challenge and it was a surprise,” Taylor said.

Typically, the FBLA has a $500 budget for keynote speakers for the regional conference.

“That can make it hard to bring in speakers who are the most polished and enthusiastic,” Taylor said. “So I thought I’d reach out to some experienced, incredible speakers, speakers who don’t normally speak at conferences our size. And just see what happened.”

“We were able to make it work,” said Taylor, who has been involved with FBLA since his freshman year and now as a senior is the club’s state vice president. “He was really, really helpful.”

Overseeing this project, making sure things are getting done, is Skip Fabritius, an OHS teacher and FBLA advisor. He lets Taylor do the planning, giving him a genuine, hands-on experience that Taylor has enjoyed.

“He’s done an amazing job,” Fabritius said. “He’s approached it with this no fear attitude, why don’t you contact these people because all they can do is say no. He’s done a great job.”

Besides Stainton, Taylor also has to line up four other speakers, entrepreneurs who will talk about what it’s like to run your own business. Taylor has arranged for a couple of other big-name speakers to come. Lieutenant Governor, Brad Owen, recently agreed to speak.  Two entrepreneurial grandmothers from Yelm, Bev Hines and Charlotte Clary, will also speak about how Ice Chips, their small garage business grew into a successful multi-million-dollar candy business after an appearance on the TV show Shark Tank.

“Evan has been rock solid,” Fabritius said. “He’s been great to work with.”

To promote the conference and boost turnout, OHS has put together a video and has posted it on social media, letting students know that Stainton, Owen and the grandmothers are coming.  (You can watch Evan’s video here.)

“Then afterwards we’ll do what we can on social media and by word of mouth to let people know what Bill did for our conference,” Taylor said. “Give him the most exposure we possibly can. And let everyone know what a great guy he is and what a great speaker he is.”

Typically, high profile speakers like Stainton speak at the state or national conference. Taylor wanted to raise the bar.

“We really wanted an enthusiastic, energetic, high octane speaker at our regional conference because not all of our members are able to go to the state conference,” Taylor said. “So hopefully he can inspire some of the kids who were not able to make the trip to state before to work harder and get more excited about FBLA.”

Planning and putting on the regional FBLA conference has been a challenge Taylor has embraced.

“It’s been a lot of work, but it’s very rewarding,” Taylor said. “It really hasn’t bothered me because this is what I like to do.”

To compensate Stainton, Taylor helped arrange free lodging at the Alderbrook Resort, which waived room charges for FBLA. Taylor also worked a deal with Little Creek, which is letting FBLA use its conference room without a charge and is serving lunches at a discounted cost.

“It’s been a lot of fun. I’ve gotten a lot of help,” Taylor said. “My advisor Mr. Fabritius deserves a lot of credit, too. He’s very supportive and a great guy to work with. I couldn’t ask for a better advisor.”

Taylor also gave the state’s new state FBLA executive director, Lindsay Andreotti, a double thumbs up for her support and her big-dream planting.

“She says nothing is out of your reach,” Taylor said. “If I want to go big she let me go big. Just learn from mistakes if things go wrong.”