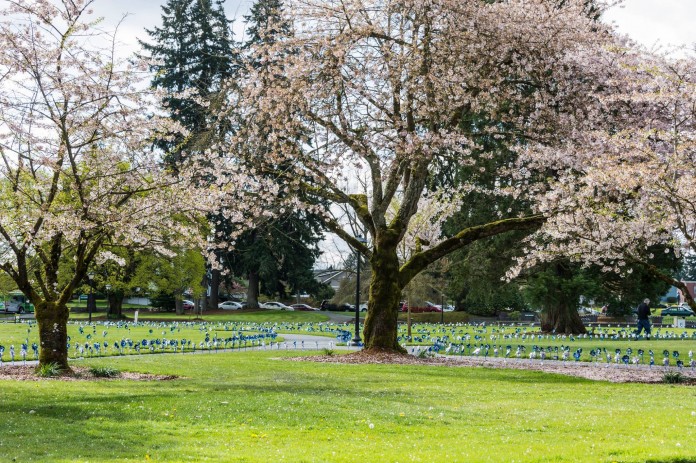 The simplest of objects can represent the necessary ideals of a society.

On March 31, 2014, hundreds of pinwheels were placed on the grounds of the Washington State Capitol.  Judy King provided the perfect explanation of what they represent. “A lot of people describe (pinwheels) as sort of whimsical. It’s free to move and grow,” she said. “It represents something we would want for children.” 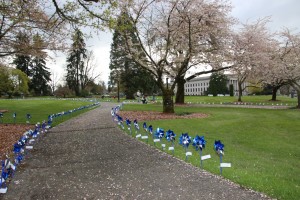 One thousand blue pinwheels were inserted near the State Capitol fountain to coincide with National Child Abuse Prevention Month, which began on Tuesday, April 1.

Organized by the Washington State Department of Early Learning, the pinwheels will be on display for a week in an effort to raise awareness for Child Abuse Prevention Month.

The Department of Early Learning worked with Parent to Parent, the Thurston Council for Children and Youth and Family Education and Support Services to set up the display.

Similar pinwheel arrays will be put up across the state and country, part of a nationwide effort focusing on creating and supporting strong families.

“We work on activities through the year with in-state partners really focusing on supporting strong families.  It’s build and support, not so much prevent,” said King, the Strengthening Families Washington administrator.  “We have a framework of five protective factors that we work on building within families in communities that are really integral to making sure families have the right resources when they need it.” 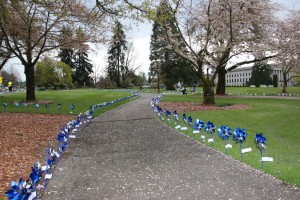 It’s the second consecutive year the pinwheels will be on display on the Capitol Grounds.  King believes the display has had a positive effect on the area and has been impressed with the support the community has shown.

“I think people really want to rally around making sure kids have what they need for a good start in life,” she said. “Having safe, stable, nurturing relationships is a job for everyone.  It’s not just the families themselves, but close friends and informal friends that support programs like this in communities.” 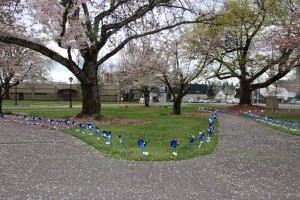 “There’s so much collaboration between us, the national organization and state leaders,” King said. “It’s pretty impressive how it all comes together.”

Though Child Abuse Awareness Month concludes on May 1, the efforts to raise awareness are year round.

Farewell to Fares on Intercity Transit

The beach talks to Miles O’Malley. Obsessed with all things aquatic, 13-year-old, stature-challenged Miles loves combing the tidal beaches near his Puget Sound home in the middle of the night. When one of his discoveries[...]
View Calendar

Before filling stations, gasoline was acquired in cans from unlikely places like pharmacies and blacksmith shops. Those needing to fuel their vehicle did so...