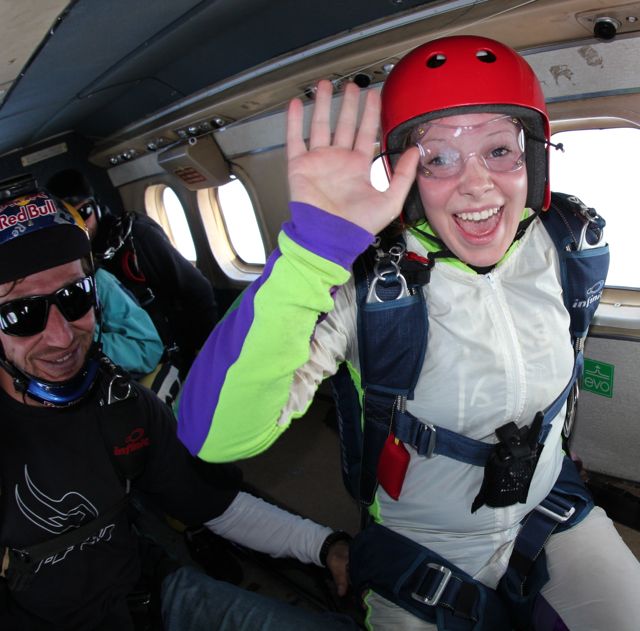 Located near Colorado Springs, Colorado, the United States Air Force Academy is among the most selective colleges in our nation. It offers students a world-class, cost-free education in return for at least five years of post-graduation service. Students have over 30 majors to choose from and guaranteed employment once they graduate. Although there are clear benefits, meeting such high standards and making such a long-term commitment is difficult. However, Olympia High School senior Reagan Underland has risen to the challenge, going through the intense application process in order to fulfill her dreams of attending the Academy.

Underland’s interest in the Academy was first sparked on a family road trip. “I was only ten when I first saw it. My family had taken a tour to see the historic chapels. Even though I didn’t have a good understanding of what the Academy did, I still remember being intrigued by the sense of purpose surrounding it,” said Underland.

Over the years, she kept finding herself being propelled towards the military. At the age of 11, her swim coach approached her, urging her to look into the Air Force Academy. She was not the only one. Other teachers, coaches, and even Underland’s pastor approached her about the Academy, most of these adults unaware that the idea was already in the back of her mind. “People just kept telling me, ‘Reagan, I think you would really thrive in that kind of environment.’ They said I had the drive, commitment, and work ethic to succeed in a military setting,” remembers Underland.

Indeed, Underland has demonstrated a strong dedication and determination in what she does. She started swimming at the age of ten and has been on a swim team for the past eight years. Her dedication to the sport rewarded her with valuable leadership experience as she was the OHS girls swim team co-captain this year. “Captains are essentially the team moms,” laughs Underland. “We plan the events, coordinate the activities, and are also the emotional backbone of the team. It was very draining but such a great experience.”

Over the past few summers, she’s put her swimming experience to use, lifeguarding at the Olympia Country & Golf Club. Although Underland was the youngest lifeguard working at the pool this past summer, her seniority landed her the position of head lifeguard and pool manager. “I’ve always tried really hard to dedicate myself to my work and take pride in what I do. I took initiative and I think the managers noticed that and rewarded me,” observes Underland.

Upon entering high school, Underland became friends with upperclassmen who were enrolling at the Air Force Academy. During her freshman year, she befriended the then-captain of the girls swim team, Clara Heffner, who had been recruited by the Academy. Around the same time, another friend from church applied to the Academy. “Watching my friends go through the application process and then hearing their stories and experiences from the Academy when they finally became students there has really helped me on my own journey,” said Underland, who continues to stay in touch. “I try to meet with them and grab coffee whenever they’re on break,” she said with a smile.

As high school progressed, Underland was able to hone in on her interests. “I’ve always had a strong interest in the humanities,” said Underland, whose hobbies include hiking, backpacking, rock climbing, poetry, and baking.  “I knew early on that I didn’t want to go to a civilian college. I wanted a place that offered structure, discipline, and challenge ,” she explained. The military seemed like a perfect fit. While Underland hadn’t grown up in a military family or had many personal connections to the military, it quickly became her dream for the future. “What you do with the four years after graduating high school can shape the rest of your life and I wanted to do something that scared me and that had purpose,” Underland stated. “Plus, I’ve always had tremendous respect for what they do for our country and the sacrifices they’ve made for us.”

Underland began the extensive admissions application early in her senior year. The stages of the application include a physical test, teacher evaluations, letters of recommendation, transcripts, a record of extracurricular activities, three essays, a personal interview, a medical evaluation, and a congressional nomination.

“It was very intimidating,” Underland recalls. “Especially since only 7% of applicants are admitted.” According to Underland, she had never felt so inadequate in her life. “The kind of people who attend the Academy are incredibly gifted, athletic, and intelligent. They’re the ones who go to Ivy League universities,” she said. But although Underland experienced times of self-doubt, she was able to stay positive and confident for the most part, especially with the support of her family. Standing strong beside her through the process, Underland’s dad, Brad, emphasized that he would have been proud of his daughter regardless of whether or not she was accepted.

“You just have to realize that in a sense they’re ‘hazing’ you,” Underland said. “They want to see how badly you want this because they’re handing you an incredible education and an opportunity that’s worth half a million dollars.”

What’s more, Underland proved to be a worthy candidate. Aside from her leadership experience, Underland has undertaken an intensive academic course load, been part of a swim team for the past eight years, and is an active member of her church.

One of the hardest parts of the application was the Congressional nomination. Applicants apply to their Congressional representative and state senators. In our case, Denny Heck, Patty Murray, and Maria Cantwell. “You have to send in a packet of all your test scores, grades, letters of recommendations, and academic records,” remembers Underland. “It was really intense because each Congressman only has a certain number of nominations to hand out and if you don’t receive one, then your application won’t be accepted.”

Once the paperwork has been turned in, applicants receive an interview with the Congressman’s review board, composed of military officers and some civilians. Luckily, Underland’s interview with Congressman Heck’s Review Board in December was extremely successful. “It was intimidating but right away there seemed to be a camaraderie,” smiles Underland. “At one point, I found myself quoting my favorite poet, T.S. Eliot, in a conversation with a West Point graduate.”  During the interview, the board asked Underland about her motivations, leadership philosophies and experiences, her weaknesses and strengths, and her hopes for the future.

“They try to find a picture of you as a person. They’re not just looking at your test scores or grades. More than anything, they’re looking for someone who knows how to challenge themselves,” explains Underland. From her perspective, the interview went very well. “I’ve never had a problem with public speaking. I knew how to answer their questions because I’d previously put so much thought into them, and I just felt really at ease,” she said.

After completing the interview, the wait-time proved rather stressful. Out of the many applications he receives, Denny Heck can only nominate 10 people, and just two to each service academy.

On a Friday afternoon in December, Underland and two friends were drinking eggnog and relaxing, enjoying the holiday spirit.  Then the phone rang. “My dad says, ‘Reagan, the Congressman’s calling. He wants to talk with you,” Underland recalls. “Picking up the phone, I hear the Congressman introduce himself and say, ‘Reagan, I have one question for you: I’m wondering why someone who spent so much of their life in the water now wants to take to the air?’ I told him how the concept of flight intrigued me and how exciting aviation was to me.” Then, the two talked about skydiving, comparing experiences.

“At last, he said, ‘Reagan, it’s my honor to give you my primary nomination to the Air Force Academy,’” said Underland. “The whole thing was surreal. I was so excited that I just started crying and thanking him.”

Before hanging up, the Congressmen added, “What you said about your leadership and what you said about your weaknesses as a person really convinced us that you are the whole package. Your motivations for going to the academy are obvious and I’m honored to be able to nominate young people like you to serve our country.”

Just a few weeks later, on January 24, 2014, Underland was home with the flu when a letter from the Air Force Academy arrived in the mail. She had been officially accepted. There were tears, congratulations from family and friends, and a dream achieved. “Committing to the Academy was one of the biggest decisions I’ve ever made. It determines the next nine years of my life,” reflects Underland.

However, rather than feeling suffocated, Underland said that the long-term commitment provides a sense of security. “Often when people graduate from college they’re left with a ‘what now?’ feeling. But I’ll have a stable job waiting for me in a career that makes a difference and serves my country,” she explained. As of now, Underland recognizes her interests in the humanities but isn’t set on a career path.

“I definitely won’t have the regular college experience,” she acknowledges. “But even with the rigid schedule, students are still allowed to spend time in Colorado Springs, do things they love, and participate in awesome activities.” In fact, the Academy has a skydiving team and aviation program that Underland is extremely excited about. “In some ways, your freedom is limited. But in a lot of ways, it’s expanded through the opportunities you’re given.”

Sadly, Underland won’t be on the swimming team at the Academy. “The coach straight-up told me I wasn’t fast enough,” she relates. “I understand though. The Academy is a Division I school with nationally ranked swimmers.” On the bright side, Underland recognizes that a break from competitive swimming will give her a chance to pursue her other passions.

Coming full circle, Underland and her dad plan to visit the campus and take the tour for accepted appointees, during her upcoming spring break. Until then, Underland is looking forward to attending the Academy. “I can’t wait to be surrounded by people who will make me want to be better, people who are similarly motivated and just as driven to succeed,” commented Underland. She will start at the Academy on June 26th for six weeks of basic training before the academic year begins in August.

Jace Munson and the Thurston Economic Development Council: Building Together

Learning to Ride with Travel Training and Bus Buddies