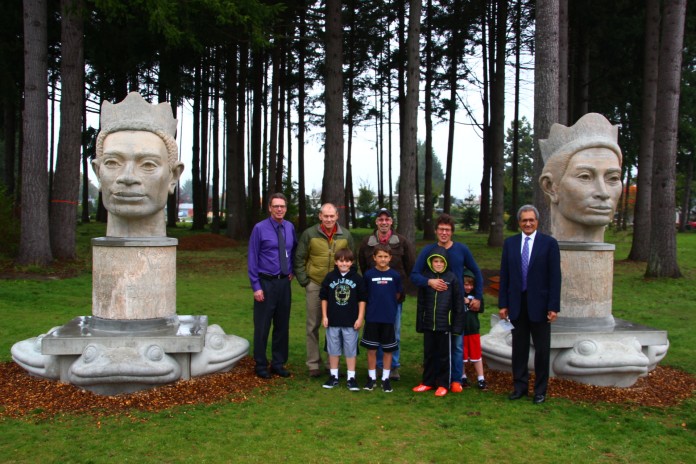 Interaction with art usually means observing the piece from a distance, separated by either a glass case or a red velvet rope.  Hands are tucked behind your back or in your pockets.  Voices are hushed in a museum atmosphere. 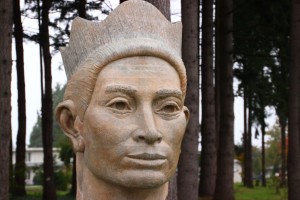 For the students at Chambers Prairie Elementary School in Lacey, there is no divide between play and the school’s new concrete sculptures.

The two sculptures and their pillars are anything but ordinary. Dwarfing nearby people, the heads stand on a circular pillar that extends from a flat platform decorated with frog faces.  The heads each wear a crown, and the back of their heads are designed in the composition of a leaf and a pinecone respectively.

An assembly was held on Thursday, Oct. 10, in the Chambers Prairie Elementary gymnasium in celebration of the two new additions to the school, part of the North Thurston Public Schools district. Jacobson was welcomed by Principal Stan Koep.  Using photos and a presentation, the artist explained to the student body how he built the statues.  Students also presented Jacobson with a collection of handmade art work they created in class. 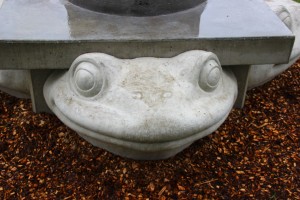 It was a culmination of a two and a half year process made possible by Washington State Arts Commission, State Art Collection in Schools K-12 program.

Rebecca Solverson of the Washington State Arts Commission described how the funding for the project works.

“Whenever the state funds building projects, one half of one percent of the construction costs are set aside for art work,” said Solverson, who also spoke to the students of the school at the assembly.   “The state funded part of the school’s construction and a lot of schools are bond funded, or have a couple other sources. This is just the states portion. Compared to size of the building projects, [the sculptures] are tiny, but as you can see, it can make a big impact.”

Down the road, Koep is hopeful the sculptures will serve as an entrance to a community park located on school grounds. 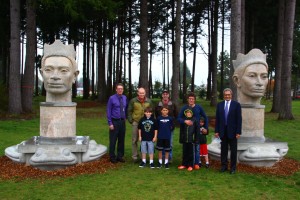 “In the big picture, the teachers and kids are trying to turn this area into a park to say thanks to the community for building this great school,” said Koep, who has been the school’s principal since it opened five years ago.

Solverson noted that site specific pieces are a change to the Washington State Arts Commission program.

“This is pretty big. We used to do a direct purchase program, buy framed works for a couple hundred dollars each. Then we switched to site specific pieces,” said Solverson. “They fit in better, and they don’t go in a closet twenty years later.”

Jacobson and the project were selected by a six person committee from hundreds of other artists on catalog at the Washington State Arts Commission. Jeff Goheen was part of that committee and attended the ceremony Thursday, a smile on his face as he saw how much happiness the project has brought the school. 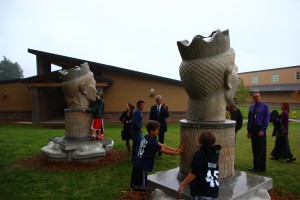 “It was better than expected and everybody that had a part in this is thrilled on how it came out,” said Goheen. “We wanted to see something that changes as you walk around it, and with the back of the heads featuring leafs and pinecones, we got what we wanted.  It’s three dimensional, whimsical, and it can inspire the students.”

Koep is also pleased with the sculptures.

“It ties together really nicely and he did such a beautiful job of responding to what we were looking for,” said Koep. “We wanted something that was culturally neutral, something the kids can relate to and something the kids can touch and climb on.  The kids are already writing stories asking who are [the sculptures] and providing a backstory. He left so much to the imagination because it’s so open ended.”

Judging by how the students were already playing on the sculptures, it appears Jacobson, the school, the State Arts Commission, and the selection committee accomplished all of their goals.

The sculptures can be viewed at Chambers Prairie Elementary at 6501 Virginia Street SE in Lacey.