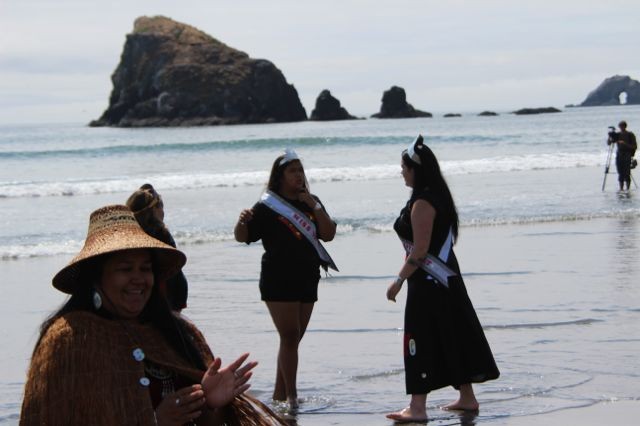 A 70 foot Totem was dedicated today at Hunishu Point, near Taholah, where the Paddle to Quinault potlatch continued into its second of six days. The Totem was carved from a 1000 year old redcedar tree from a section of Quinault forestlands set aside for such purposes.   “The Totem reflects the connection of the Quinault people with the land and the animals. These are the things that make us Quinault,” said Guy Capoeman, journey coordinator.

Tribes from throughout the Northwest, Canadian First Nations and even Natives from Hawaii and New Zealand celebrated through the day and prepared to continue into the night. They progressively shared their customary dance, song, gifts and words of honor and traditional value. Thousands of visitors continued to pour in, shopping at dozens of Native vending booths, taking in the traditional ceremonies and enjoying the complimentary food by the thousands. The Bella Bella First Nation will perform Monday, just prior to Quinault. Bella Bella is next year’s journey destination.

The Totem was dedicated to Emmett Oliver, the Quinault tribal elder whose efforts led to the renewal of the canoe journey tradition. In its first year of 1989, 20 canoes were involved. The final count of canoes this year is 89, according to Capoeman. The Totem, which was also dedicated to longtime tribal leader Phil Martin, was carved over a period of approximately three months by Quinault tribal members James DeLaCruz, Jr., Marco Black and Brian Comenout.

The potlatch can be monitored via streamline at www.GHWebTV.com. More information on the event is available at www.PaddletoQuinault.org.

Motorized canoe races are scheduled to be held on the Quinault River on Sunday.

The City of Tumwater Parks & Recreation Department is offering a wide variety of online programming for both youth and adults. From Magic Lessons and STEM education for kids to Yoga and MixxedFit for adults,[...]
all-day What’s Blooming Around Budd? @ Online
What’s Blooming Around Budd? @ Online
Jul 8 all-day
Beginning Thursday, June 18 at 3 p.m. Follow each week as Pacific Shellfish Institute (PSI) dips their nets to see what plankton is blooming in Puget Sound and around our local lakes. Learn plankton identification[...]
7:00 am SPSCC Virtual Open House Week @ SPSCC-Online
SPSCC Virtual Open House Week @ SPSCC-Online
Jul 8 @ 7:00 am – 8:00 pm

As we cautiously begin to gather in places outside our homes with people outside of our households, Phase 3 of Washington’s Safe Start program...