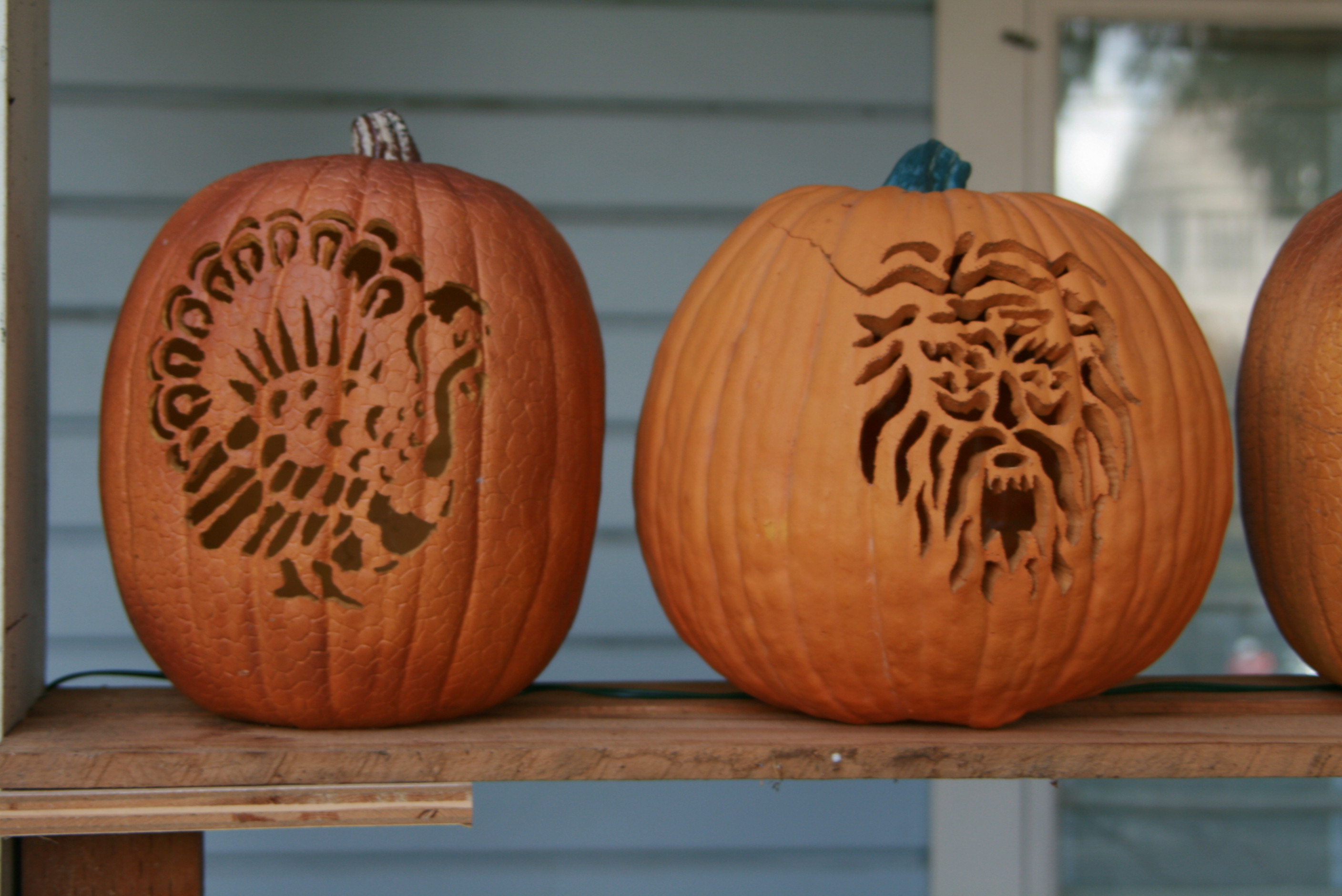 Carving pumpkins is a Halloween tradition for many families during the month of October.

However, there are some who take carving the orange gourd to the extreme, both in sheer numbers and elaborate patterns.

For around twenty five years, Leslie and Scott Sheeran, along with their son Nicholas, have been producing carved pumpkins at a high rate, each with a current and/or elaborate design for the public to witness.

“We always did a few just like everybody does, but we had a friend tell us that you can really do anything on a pumpkin,” Leslie Sheeran said in an interview from her home with ThurstonTalk.com. “We had more people get involved, everybody had ideas and it kind of went from there.”

Each year, hundreds (if not thousands) of trick-or-treaters stop by the Sheeran’s house, which is located off of Capitol Way in Olympia, a few blocks south of the State Capitol at the corner of 18th Ave SW and Water Street.  With all the attention the pumpkins and the Halloween décor generated, the family realized the potential for a charitable function.

“After we had displays in the fifties (number of pumpkins), someone suggested, due to the high number of people coming by, that we get involved with the (Thurston County) food bank,” Scott Sheeran said. “And we thought that was great idea.”

On average, around $500 in cash is raised for the food bank during the Halloween season at the Sheeran’s house, with over 10 + cases of non-perishable food.

“Halloween, it’s a fun time of the year, but it’s nice to know we’re helping others in some capacity,” Scott Sheeran said. “I think people respond to that.

Along with help from friends and their daughter in-law Rachel, the Sheeran’s produce between 100-150 pumpkins each year.  The high number of pumpkins, which the family started producing once becoming involved with the food bank, does not compromise the artistic integrity.

“We go for quantity, but just as importantly, we go for quality as well,” Leslie Sheeran said.  “And that takes a lot of work.”

Each particular pumpkin can take up to ten hours to carve, as the various designs, such as the 2012 Presidential candidates, the Seattle Mariners logo, and Toy Story characters, require precision and patience to complete.  The Sheeran’s brought forth an in-progress carving featuring a design from the popular TV show The Walking Dead, that Rachel Sheeran was currently working on.  The couple estimated that Rachel had already put at least five hours into the design and still had a ways to go.

Patterns are found on various websites and internet programs before being notched into the pumpkin using tools such as an X-ACTO knife.  The carvers choose designs based on current trends, public figures in the spotlight, and issues and organizations that have a local following. 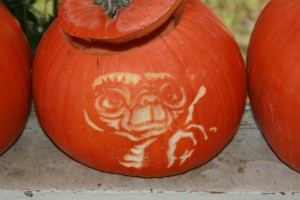 “We like to stay current with our pumpkins,” Leslie Sheeran said with a smile. “We find new designs or popular designs online and we try to have a host of pumpkins that connect with people of all ages.”

The Sheeran’s Halloween spirit has certainly hit a chord with those who travel to see the pumpkins and the surrounding houses.  A majority of the South Capitol neighborhood houses have decorations of their own, and the streets on Halloween night are flooded with various ghouls, superheroes and other spirited costumes.

“I think it has helped bring the Halloween spirit, if you want to call it that, to the neighborhood,” Scott Sheeran said.

“We tell people who just moved in nearby to be ready for Halloween and the amount of people who show up,” Leslie Sheeran said. “Not everyone enjoys Halloween, but in this neighborhood, it’s a big event for most.”

In years past, performance bands have shown up to the Sheeran’s house, as well as a group performing the routine from Michael Jackson’s “Thriller” music video.  Most years, the family has a friend supped up to a microphone to direct the ever-changing audience, and a parking space is cleared off in front of the house for those who want to drop their kids off to scour the neighborhood for candy, or to donate items to the food bank.

While the whole process requires a large amount of work from the family, they enjoy the final product and the Halloween experience. 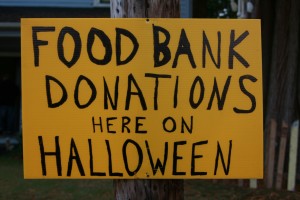 “We really enjoy ourselves Halloween night,” Leslie Sheeran said. “Those cold nights in the garage, when we’re carving, we think about how it will all be worth it to see all the smiling faces who stop by.”

“It’s amazing how its become a tradition of sorts,” Scott Sheeran said. “It seems like it grows in popularity through word of mouth, and we’re proud to be a part of people’s Halloween.”

For more information on the Sheeran’s pumpkin display, click here.  You can find the pumpkins at 217 – 18th Ave SW in Olympia.