Almost 50 years ago, one of Thurston County’s most loved and picturesque parks opened to the public. The Tumwater Falls Park, owned and operated by the Olympia Tumwater Foundation is now one of the most popular private parks in the region.

Donated to the non-profit foundation by the Olympia Brewing Company, the park opened in 1962. The 15­-acre park situated along the banks of the canyon stretch of the lower Deschutes River in Tumwater. The park hosts over 200,000 visitors each year.

“Tumwater Falls Park is a gift to the community from the Olympia Tumwater Foundation.  The Foundation maintains the park for the community,” adds Freedman.  “The park is privately funded and does not receive any city, state or federal revenues.  All funding is from private sources.”

Here is a glimpse at some interesting aspects of the property now encompassed inside the park.

1. While the Deschutes River now flows north, it could have at one point actually flowed south. As the last glaciers receded from Puget Sound thousands of years ago, glacial lakes likely formed behind them. Trapped between glacial ice to the north, these freshwater lakes probably flowed south towards what is now the Chehalis River. It’s possible one of these rivers carved what we now consider the Deschutes River Valley.

This is also the same activity that created Tumwater Falls. The glaciers likely deposited soft sediment, which was relatively quickly washed away by the river. This left much older volcanic rock to form the falls.

2.  The existence of the falls adjacent to a saltwater bay made them an attractive place to settle and for commercial development in the mid-19th century. Before steam power became prevalent in industry, mills were located near waterfalls to harness to waterpower.

It is ironic that the reason Euro-Americans first came to Tumwater (then called New Market) soon went out of fashion. As the industrial revolution took hold in the United States, the need for close-by water power lost out to steam power.

3. In addition to water powered industry, the current falls park was also home to one of the earliest railroads in the area. When the Northern Pacific Railroad decided on a terminus with Puget Sound that wasn’t Olympia, local residents decided to build their own line.  What eventually became known as the Port Townsend line ran through the west side of what is now the Falls Park. Much of the current trail along the west side of the park is actually the old railroad grade. It continued down the west side of the Deschutes River (now Capitol Lake) until reaching deep water near where Tugboat Annies is now located. 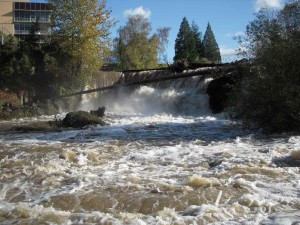 This railroad was eventually abandoned when the current rail line that runs through the former brewery site (and under Capitol Way to Olympia) was built.

4. An annual attraction to the park is the salmon migration through the fish ladders and into holding ponds operated by the state Department of Fish and Wildlife.

Up until the 1950s, it was unlikely that salmon were ever able to make it up to the upper Deschutes watershed. This was until the state built three salmon ladders in the 1950s and began planting salmon. Two years after the Tumwater Falls park opened, the state added ponds along the Deschutes.

In the 1980s, production peaked at the Deschutes with 12 million fish. Today, just less than 4 million chinook are released each year. The vast majority of the fish released from the Deschutes are actually caught in the Puget Sound between Everett and Tacoma.

The state, city of Tumwater and local non-profits currently have a plan — yet to be funded — to expand the hatchery to include a rearing facility and education center into Pioneer Park.