In rowing, each powerful stroke moves competitors closer to the finish line and a possible victory.

For Capital High School graduate Brodie Buckland, a victory has already been obtained, as later this month he will compete at the Summer Olympics in London for the Australian National Rowing Team.

Buckland, who originally attended the University of Washington and later Harvard University, competed for the United State on the world circuit in 2007, when he tried out for the U.S. team going to the Beijing Olympics.

While he did not qualify to compete in the  2008 games, Buckland will now row against the world’s best in a pair with Silver Medalist James Marburg.

Buckland, who spoke to ThurstonTalk.com via Skype during his training in Italy, is well aware of the Olympics immenseness and the sacrifices he has made in order to compete on such a large stage.

“Well, I think the interesting thing about the Olympics is that it’s the pinnacle of sports but you only get one shot every four years so it’s about the four years leading up to it,” Buckland said. “Some of my friends and I talked about how it’s been like a bracketed four years. You can look at the changes in your life that are relative to this one thing underlining them all, and now it’s sort of crescendoing up. It’s something that’s really important and it takes all the minutes you spent in training and turns it into this one amazing memory and one moment.  It’s also transcendent, in terms of borders and a lot of different things.  It pulls you out of the normal routine and asks you if there isn’t something more to life.”

Following his competitive career for the United States, Buckland re-located to Sydney, where he fell in love with Australia and the local approach to his favorite pastime, and later became an official citizen.

“I moved out to Australia and I started rowing for a club in Sydney, and was enjoying it and trying to have fun with it,” Buckland said. “I really liked the attitude towards rowing down here and the holistic approach they have towards the sport. It just went from there, and here I am.”

Competing for Harvard and University of Washington, known to be two of the best collegiate rowing programs, Buckland was exposed to some of the best competition in the world, an experience he believes has prepared him for the Olympics.

“In some ways it helped me in that it was very tough competition and I was exposed to some very high quality athletes in terms of guys I was teammates with and also guys that I was competing against,” Buckland noted. “Being around them and seeing what it took to excel in the sport was important.”

However, he is quick to point out the drastic differences between eight and two man rowing and how much he enjoys the latter.

“The funny thing about college rowing in the U.S. is that it’s all in the eight. And so, you spend very little time in small boats,” Buckland said. “The racing difference between eight and pairs is pretty noticeable.  On an eight, you’re more of a soldier, in that you do what needs to be done with everyone else.  In a pair, it’s only two guys so you have to be much more independent and much more of a leader.  But the difference between the rower I was then and now is pretty marked.  The way they approach rowing down here versus the way they approach collegiate rowing in the U.S. is much more holistic. They involve a greater variety of aspects of physiology, psychology, nutrition and it’s much more about peaking in an individual boat for an individual event which is the next level from collegiate to elite.”

In order to succeed, a rowing pair must develop a relationship based on trust while sacrificing everything for one another.  Buckland believes, through countless training sessions with Marburg, that the duo is on the right path.

“I think the funny thing about a pair is that it’s a little bit like a marriage.  You have to have that underlining trust and to really believe in that guy and know that you’re putting your success in his hands and he’s putting his in yours,” Buckland said. “Simultaneously, it’s the peak individual sport and peak team sport because you have to manage yourself to the best extent you can in order to enable the person you are rowing with to manage themselves to the best possible extent.”

Buckland’s love and passion for rowing developed hand-in-hand with the creation of the Olympia Area Rowing Club, a team that continues to produce national champions at the high school level and send athletes on to further endeavors at the collegiate level.   Buckland was a part of the program’s first team, and fondly remembers the days of his early development in the sport. 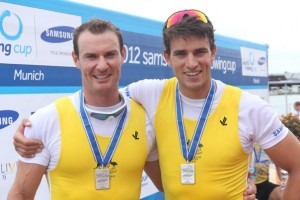 “We were literally learning to row as the club was getting boats and oars together. We started out of a blue shipping container and that was our starting point.  We would do workouts in some guy’s basement.  It was a very good avenue for the energy I had when I was 16 and it just developed from there,” Buckland said. “It’s amazing that the club has continued and has flourished in a ‘not so normal’ rowing environment, and the fact that they have (performed well)  is a testament to the dedication of the coaches and the fact that rowers can really show perseverance and dedication.”

The ascent from novice to the highest levels of amateur rowing came quickly for Buckland.

“It was a pretty high trajectory toward being 20 and part of a varsity program going to the national championships (at Washington) and moving on to Harvard and winning the national championship in 2005,” Buckland said. “It was a big transition. One of the main points of rowing is that it’s not necessarily fun like baseball or soccer but it’s rewarding and you have to keep plugging away to succeed.”

“(What I’m looking forward to most) would be seeing my family for the first time in three years, and being close to them,” Buckland said.  “Experiencing this with them will be huge.  I haven’t had an opportunity to get back to the states in a long time, so it will be a special moment.”

Win a $400 Harley-Davidson gift card and a chance to have your design sold on one of our T-shirts! Northwest Harley-Davidson (NWHD), with the support of Law Tigers, is hosting a T-shirt design competition for[...]
10:30 am Chicken Chat @ Eastside Urban Farm & Garden
Chicken Chat @ Eastside Urban Farm & Garden
Sep 23 @ 10:30 am – 1:00 pm
We invite our local poultry enthusiasts to meet up over coffee (or tea) in our new “Book Nook” area, exchange tips and info, and make connections with other poultry lovers! This is a great opportunity[...]
View Calendar