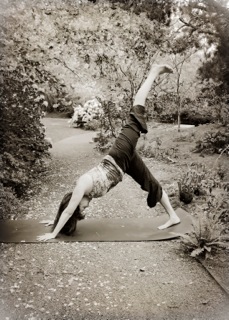 I am a girl that finds pleasure in pain. There are alot of us out there. You can see us at marathons, road bike events, mountain biking, triathlons, and more. The harder we beat our bodies, the better. Pushing through the unbearable and coming out the other end beaten but victorious is addictive. 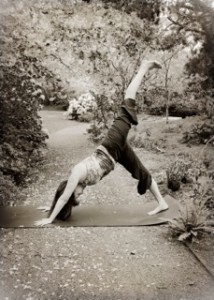 The perspective that anything is humanly possible – that our minds and bodies are stronger than we ever challenge them to be- that is what draws me in. And so when I have an hour or two to workout I go for activities that I can FEEL, that I force my body to do. Not every workout is a death march, but in my mind I want to get the bang for my buck in workouts, and that requires sweat, elevated heart rates, friends, and running shoes. Almost any problem can be solved on a four hour long run, and if it can’t…..then there is clearly no solution.

My running mentality used to flow straight into my ideas and beliefs about yoga. If I was going to spend an hour of my life doing yoga, it had to have the words such as power, fit, experienced, intense in the class description.  (I’m so ‘un’experienced but why waste time in a beginner class?) And, just for good measure throw in some heat, hot, or perhaps boiling!

I would FORCE myself into poses that others just glided into. Yes, I turn yoga into  competition.  Runners and cyclist are historically tight….makes us faster on the track and road, but stiff  as board in yoga studios.

Every time I attend a yoga class, I feel better.  I was hooked on certain classes and instructors and as cheesy as it sounds, they cleared my head and filled my soul. Those first 10 minutes after class I was the happiest, most content person in the universe. No furrowed brow, no tight shoulders – just ahhhh content. 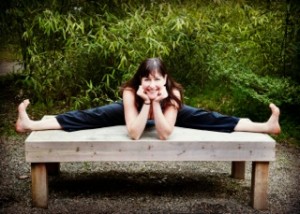 Recently, my world was turned upside down to the opposite end of pain and force. For 90 minutes, I was “steady” and “sweet” to my body. I didn’t break a sweat, but did almost shed a tear. I didn’t need a Garmin to tell me that I had found the place where I needed to be, sometimes the universe just guides you there.

At The Heart of Wellness Center in Tumwater, yoga extrodinaire Anne Swartz guides classes though a series of slow moving yoga poses in Yin Yoga.  I’ve known Anne for a few years since we both taught at The Valley Athletic Club, leading indoor cycling and yoga classes, respectively.  Anne Swartz is sweet, the yoginess just seeps out of her and so I nicknamed her Sweet Anne.

Back to Yin Yoga…I have avoided Yin Yoga for years. In my mind, sleeping in is Yin Yoga. But it is not that at all. Whether you are a runner, cyclist or individual that has been stuck in the “I don’t do yoga” mentality you need to carve out 60-90 minutes for yourself and visit Anne at Heart of Wellness.

I dragged my dirty yoga mats into class, plopped down next to my friend Megan and just decieded to let go. Let go of my preconcieved notions, let go of the time and what I could be doing, and let go of mental anguish that had been torturing me for days.

Yoga, like running, is filled with individuals old and young, super fit and just starting out. I like that about yoga. We started slowly, holding stretches and poses for long periods of time. My hands tingled at numerous time – yes I am that tight and unflexible – but the tingling felt good. Anne told us to focus on the “steady” and “sweet” aspects of our lives.

That we can’t “force” a plant to grow, but we can nurture, we can guide. In all honesty I was forcing that pigeon hold, but not because it was a challenge, but because Anne was guiding me, coaxing me to move with it. Now it’s hard to talk about yoga without sounding cheesy, but everything I say here is true. There were times that morning where I’d fight a pose, hate a pose, and it would take everything I’d have just to hold it. Just as you see marathoners break into tears crossing the finish line, that is how it can feel in yoga…..you push yourself to the verge of mental and emotional breakthoughs. 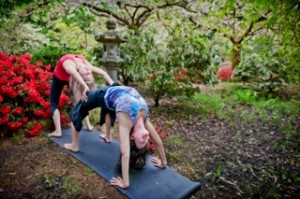 As Anne was guiding us through the sequences she walks around and adjusts you, helps you find a little more in your body and a little more in your mind. After 90 minutes I didn’t want to leave. I wanted to stay in corpse pose for days. My body just wanted to meld into the Earth. My yoga high lasted for hours that day. I had heard of runner’s highs – and now I wanted yoga highs. I found myself trying to see if I could squeeze in a Monday night class – just need another dose of Anne and yoga!

My friend, Megan, who attended the class with me agrees with my assessment that you can’t ‘fake yoga.’  Megan told me, “Anne has a way about her that is instantly welcoming, calming, and encouraging all at the same time.  Some of the poses seemed unbearable at first, but Anne’s sweet voice and message turn yoga class into a therapy session.  After the class, my body felt loose and relaxed and my mind felt at ease.  Overall, I just felt happy.”

Isn’t that how we all want to start or end the day…just feeling happy?!?

Music – it’s powerful stuff. Whether practicing yoga on your own, or attending a class – a great playlist can inspire you to push further and go deeper than you imagined yourself capable of. Below is one of my favorite yoga playlists – songs that instructors have played in classes I’ve attended that transported me out of my everyday life into that ever precious “yoga moment.” Although they may not be considered traditional yoga songs I’ll often listen to many of these songs when I just want to unplug…………..I hope you enjoy them!