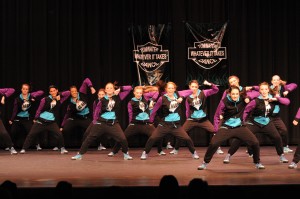 Last week I  went out to Bush Middle School to check out the Tumwater High School (THS) Dance Team. I had heard that they were good….through the typical venue of “Facebook Dad Bragging” (go Greg Bert!), but really didn’t have a concept of what a high school dance team did (besides dance). Even though their season is over, Coach Kim Hille rounded up the troops and got them together so that I could see firsthand what dance is all about, and it was amazing. I thought I’d be there for a few minutes, chat it up with some of the girls, take a few photos and hit the road. Boy, was I wrong! These girls rocked it out! For an hour! If you are new to the world of dance team here are a few things you should know: 1) they all dress the same, and it’s ridiculously adorable; 2) yes, they are all flexible, coordinated, and have rhythm (and it’s not like the majority of us that “think” we have rhythm, they really have it); and 3) it would be impossible to take a bad picture of any of them.  Really, after an hour, which was 5 routines, plus the 5 set-ups before the routines…I realized this. These girls are solid athletes, with super positive attitudes…and yes, once again….they are all ridiculously cute.

Coach Kim Hille loves to dance, and it’s evident in everything aspect of the THS Dance Team.” I have always loved to dance.  I took ballet when I was in elementary school, but most of what I learned was through observation, dance movies and music videos.”  Coach Hille danced on Tumwater’s dance team when she was in high school and made the All-State Jazz team her senior year. She coached the Tumwater Junior High team during her years at college and after she started teaching at Bush Middle School she started the Bush Middle School Dance Team.  Several of her Bush Middle School Dancers moved onto the THS  team and they needed a coach, so in 1996 she took the job as Varsity Dance Coach at THS and has been with the team ever since.  Currently she coaches the THS Team, Bush Middle School Team and two Tumwater Parks and Recreation Teams. 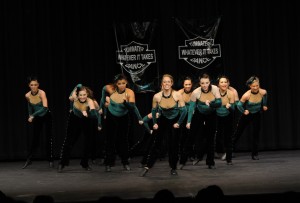 At this time, THS has 35 girls on the squad — 20 on varsity and 15 on JV competition  teams. “Our biggest challenge is definitely balancing our time.  We compete in three divisions (not many teams in our state compete in three).  We have also earned the State 2A Academic Championship three of the past four years.” Coach Hille and the girls take their studies very seriously. Their number one job is school, and many of the girls are taking advanced courses. Balancing school work and other sports makes it essential that they get the most out of their practice time (they do!).  Katie Bert is one of those girls that is balancing school, dance and drivers education! Like her coach, Katie has been dancing ever since she was a little girl and her mom signed her up for baby ballet classes. Before she joined the THS Dance team she played soccer, volleyball and was in gymnastics, but dance “just stuck and I love it!” 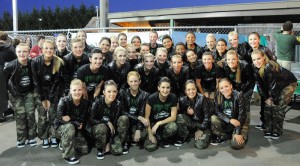 The girls practice Mondays, Tuesdays, Wednesdays, Fridays and most Saturdays. The routines are a little over two minutes, which  would be equivalent to a “sprint” workout the entire time.  “It takes about 30 hours to get a routine performance ready and at least 40 hours to make it competition ready.  By the time the routine hits the state floor, we have at least 50 hours the routine.  The process is arduous; we learn the choreography initially, then we clean each and every 8 count so that everyone is doing the SAME thing in the same way.  Often times it takes two or three different cleanings before it starts to gel.  Once we get it on the floor, we videotape and study the performance.  From there we change and adjust what isn’t working and continue to fine-tune the routine.  Every routine is work in progress.” Coach Hille

Most practices are 2.5 hours  The first 30-45 minutes are dedicated to warm up and conditioning and fine tuning on skills. Then they move into working on their routine.  “During the main part of the year, our practices focus on the routine we will be performing next.  Once we start competing, we split up our time between multiple routines.  We usually start be doing the routine full-out once and then going back and work on sections that are giving us difficulty.  Sometimes we do that whole group, other times we divide up into smaller groups and rotate.  We always finish our practice going full out one last time on the routine we were working on.”

In addition to regular practices they also attend studio at STUDIO ONE as a team and go to conventions like Monsters of Hip Hop to improve their technique and style.  “We hire choreographers from around the United States to work with us.  We are always working to improve ourselves.” The team performs at the school’s basketball and football games, competitions all around Washington, the Washington State Competition, and the Nationals Competition in Orlando, Florida. 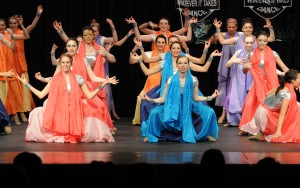 This year the team placed 1st in Hip Hop, 1st in Pom, and second in Dance at the Washington State Competition! “State was huge; we had a STELLAR POM Performance.” The team also had  two dancers make it to the Monsters of Hip Hop finals held in Florida this summer, all of the seniors made All-American at camp, and the JV team competed at several competitions and scored better than many varsity teams.  Last year the girls JV went to Nationals in Disney World and placed 6th in the nation! That’s huge! These girls and their coach are doing amazing things, and really deserve the recognition of their peers and fans! Katie and her teammates know that one of the biggest challenges that student athletes face is “confidence in themselves and in the sport they are involved in.  To manage this, we stay positive and never give up! We always strive for the best and if we fall or fail, get back up!”

Just watching the girls you can tell that they are bonded in  a way that only comes from spending hours and hours of time together. It truly has a family feel to it. The team has unity nights, BBQ’s, fundraisers and summer camp. The girls extend that bond by having “sisters” on the team whom they exchange gifts with throughout the year at big performances. “Our unity is what differentiates our dance team from other dance teams. We may not all get along with each other at times, but overall, we are all friends and have each other’s backs.” Katie Bert

Clearly these girls will take away more than just some sweet moves on the dance floor (which will come in handy at all those future weddings!)They will leave high school with a love of dance, responsibility, strong work ethic, dedication and commitment, leadership and followership, the memories of a dance family.