Home Around The House South Sound Solar: Providing Renewable Energy And A Yearly Check From The... 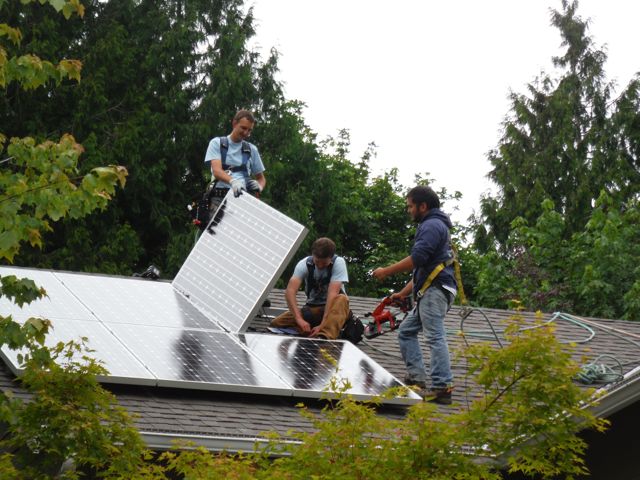 South Sound Solar president, owner, and lead engineer Kirk Haffner first became passionate about solar energy in the 1980s. After working as a teacher and at Intel, Kirk, who has his master’s degree in physics opened South Sound Solar in 2008.

South Sound Solar is the Olympia area’s longest-running solar installation company – doing both residential and commercial installations – and the only one with the science background to give homeowners and businesses a truly thorough, dependable solar electric or solar hot water experience.

“A lot of companies will say, ‘Oh yeah, sure we can install that, no problem!’” says Dever. “And then we’ll go and do a bid and notice a tree that will cause problems or that their panel isn’t big enough to support the system.”

What sets South Sound Solar apart is its knowledge of the science behind solar and its dedication to getting the job done right. “We’re not just a couple contractors who decided to start doing solar. It’s all we do,” says Dever.

South Sound Solar is very particular about the systems they offer and Dever readily admits that they tend to cost a little more than the competition.

“But we’re doing the highest quality, made-in-the-U.S. systems available,” she says. “If we don’t know it will work here, we won’t sell it.”

They also offer solar hot water, which is primarily used for domestic hot water, but can also be used for heating pools and other applications.

“We’re also happy to consult on do-it-yourself projects,” Dever says. “If you want parts to replace something, we’re happy to do that. And then we’ll also service and repair any system needs, regardless of who installed it and when.”

Unlike many companies, South Sound Solar starts the solar process by visiting your location for what it calls its solar site survey, where the team examines your individual situation closely. “We look at if your existing electrical can handle the system, how your roof’s doing, your usage – is it even worth it for you to get a system. Things like that,” says Dever.

There’s a $95 charge for the survey, which is then credited to the cost of installation. “We do a thorough walk-through of your home with you and answer any questions about how it works. Then we give you a bid with a couple different price points.”

One of the first questions South Sound Solar asks interested parties is about budget. The hard truth is that if a customer isn’t open to spending about eight thousand dollars, the project might not be worth undertaking.

And yet, even with the seemingly large price tag, solar is absolutely worth it, financially, over the long run.

“On average, for solar electric and solar hot water, you’ll typically regain your costs in five to 10 years,” says Dever. “And everything after that is just free electricity.”

Once South Sound Solar knows a client’s budget and looks at their specific project, they’ll supply a bid with a couple of different price points underneath the desired budget.

“Then that bid includes a detailed pay-back calculation using a very conservative inflation rate on your electric bill,” Dever explains. The average rate increase from Puget Sound Energy over the last 10 years has been 6 to 10 percent. South Sound Solar calculates only a 5 percent rate hike when estimating how soon the system will pay for itself.

Once a customer signs on the dotted line and provides a down payment, materials are ordered. The full process – from getting a bid to having the meters installed and being completely finished – is usually one to three months, depending on the type of system and the lead-time on the necessary panels. All parts are custom-ordered.

The installation itself usually takes just three to five days, depending on the size and complication of the system. “It’s not like a remodel,” Dever says. “We’re in, we’re out, and you’re good to go.”

Aside from the obvious environmental benefits inherent in renewable energy, there are also major financial benefits to going solar.

“We get asked about the incentives a lot,” says Dever. “There’s a 30 percent federal tax credit. And the utility pays you between 15 and 54 cents per kilowatt hour for everything you produce if you’re connected to the grid with a solar electric system.”

Puget Sound Energy sends South Sound Solar customers a check once a year for all the electricity they produce. They have essentially become a substation for the utility. “My parents’ check this year was about $400,” says Dever.

“Your electric bill is always going to go up,” she continues. “But the law guarantees that the utility is going to give you net metering and production incentives. The stock market can’t beat that right now.”

And South Sound Solar takes care of all the paperwork needed to work with the utility. “We submit all the paperwork for you that we’re legally allowed to – you do have to take care of a couple things – and then we send out a reminder at the end of the year for you to apply for a tax credit.”

Many people wonder if often overcast Washington State a good location for producing solar energy. It is. “In Washington, we actually have 30 percent more sunlight than Germany, and Germany is the leading user of solar,” says Dever.

And solar is actually more efficient in cooler climates, since heat acts as a resistor for electricity.

“It doesn’t have to be a perfect sunny day for solar to work. The production will go down, but it will not cease unless it’s an absolutely horrible day, where you have to turn your headlights on at noon. That doesn’t happen very often.”

Like her father, Dever has a passion for the work South Sound Solar is doing. “We’re reducing dependence on foreign oil, we’re helping the environment, we’re improving national security – all of these things that, no matter what political party is important to you or views you hold, we’re doing it all with one install.”

The WET Science Center is offering activities you can do at home! Every week there is a different theme to keep you curious about the world around you.
all-day What’s Blooming Around Budd? @ Online
What’s Blooming Around Budd? @ Online
Aug 5 all-day
Beginning Thursday, June 18 at 3 p.m. Follow each week as Pacific Shellfish Institute (PSI) dips their nets to see what plankton is blooming in Puget Sound and around our local lakes. Learn plankton identification[...]
Aug
6
Thu
all-day Building through Play: Virtual K... @ Virtual Event
Building through Play: Virtual K... @ Virtual Event
Aug 6 all-day