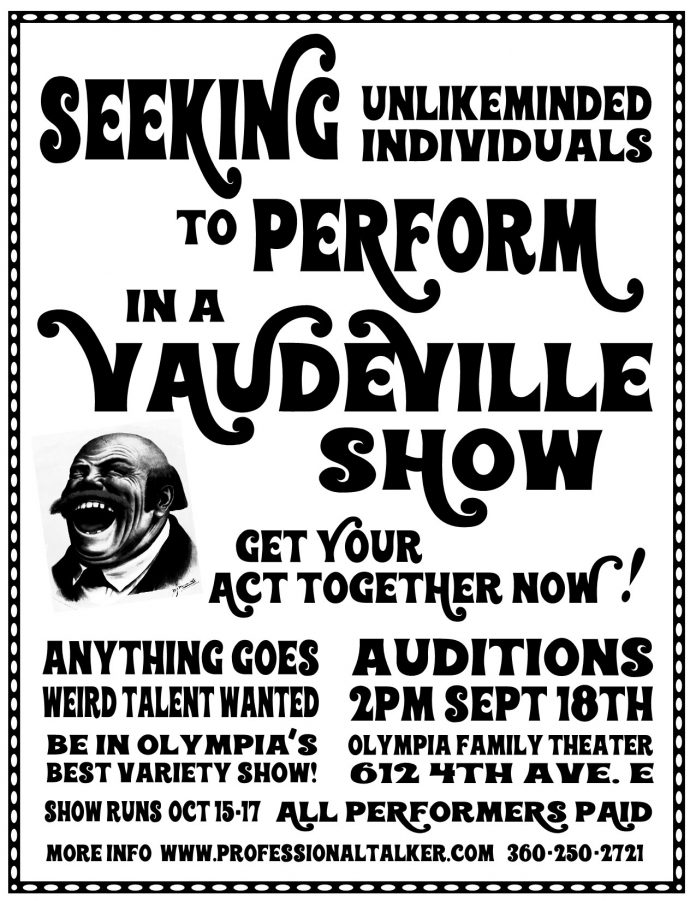 More Info: BE IN THE VAUDEVILLE SHOW!

It’s time to get your act together! Olympia’s most popular annual variety show is back and preparing for a live in-person performances. It needs you or your group to share your talent and be part of The Lord Franzannian Royal Olympian Spectacular Vaudeville Show!
Vaudeville Show Definition: n. A series of unrelated acts performed in rapid succession. Very Popular in the United States in the early part of the 20th century.

BigShowCity Performing Arts Organization is seeking short (2-6 min) live performance acts that are often: funny, or skillful, or daring, or weird, or simply audience worthy. (Not so much serious drama, not so much rock bands.) They can be solo acts, or group numbers. Acrobats, Dancers, Jugglers, Puppeteers, Storytellers, Singers, Actors, Magicians, Comedy, _________ fill in the blank. All talents encouraged from the traditional to the modern bizarre.

All performers selected to be part of the show will receive a stipend.
Proof of COVID 19 vaccination required for all performers. (e.g. CDC Vaccination card, or photo of said card)

This is a fun show to participate in and it is very well liked in our community – every performance sells out! At the audition, show us your act, or even just tell us all about your idea for an act. Remember, even if your act isn’t fully formed and rehearsed, we still will have another few weeks to get it up to speed. Go for it! Take a chance.

Get creative, anything goes. What can you do?

Ricardo’s Kitchen + Bar in Lacey Is a Premiere Steak Destination,...

Like his sexy beef, Lacey restaurateur Rick Nelsen is aging well. I remember having dinner in the original Ricardo’s location at the purple house...

Fall Bounty is in All its Glory at The Olympia Farmers...