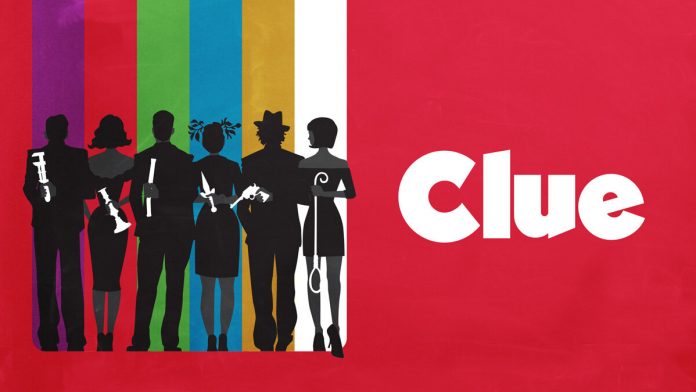 This is a unique, fully-virtual theatre experience. So, snuggle up in your PJ’s, grab your popcorn, and enjoy the show from the comfort of your own home!
Tickets on sale through Broadway On Demand for this virtual show. $9.95 + a $2.95 service charge.
Who did it … or rather who didn’t do it?
Based on the iconic 1985 Paramount movie which was inspired by the classic Hasbro board game, Clue is a hilarious farce-meets-murder mystery. The tale begins at a remote mansion, where six mysterious guests assemble for an unusual dinner party where murder and blackmail are on the menu. When their host turns up dead, they all become suspects. Led by the Wadsworth – the butler, Miss Scarlett, Professor Plum, Mrs. White, Mr. Green, Mrs. Peacock and Colonel Mustard race to find the killer as the body count stacks up. Clue is the comedy whodunit that will leave both cult-fans and newcomers in stitches as they try to figure out…WHO did it, WHERE, and with WHAT!
CLUE – THE STAY AT HOME VERSION
ADAPTED FROM THE SCREENPLAY BY JONATHAN LYNN
ADAPTED FROM THE PARAMOUNT PICTURES FILM
WRITTEN BY JONATHAN LYNN
AND THE BOARD GAME FROM HASBRO, INC.

The South Sound Reading Foundation’s goal is to bring the joy and promise of reading to all South Sound children. Our goal depends on book drives like this one to receive gently-used children’s books that[...]
10:30 am Chicken Chat @ Eastside Urban Farm & Garden
Chicken Chat @ Eastside Urban Farm & Garden
May 12 @ 10:30 am – 1:00 pm
We invite our local poultry enthusiasts to meet up over coffee (or tea) in our new “Book Nook” area, exchange tips and info, and make connections with other poultry lovers! This is a great opportunity[...]
View Calendar

Here is something you may not hear from a baker often, “I actually don’t like cake very much,” Kathryn Zambrana of Olympia admits. But...

Talking Cedar is Poised to Scale Up Brewery Production in 2021

Whether Sweet or Spicy, Splat Hot Sauce Is Here To Make...