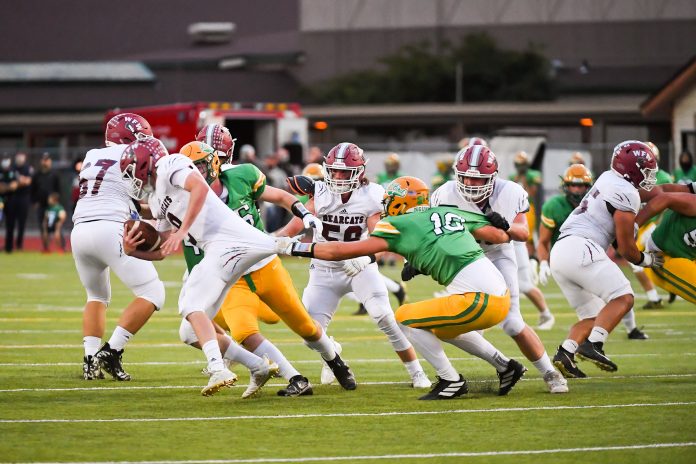 Senior tailback Payton Hoyt scored four times to lead the T-Birds, rushing for 101 yards on 13 carries. Hoyt was thrilled with the support he received. “I wouldn’t be able to have that kind of game without my offensive lines’ blocking and everyone on the team having my back,” Hoyt said after the game. Hoyt was joined by fellow running backs Karson Schreiner (5 carries, 103 yards) and Carlos Matheney (13 carries, 65 yards) to help Tumwater dominate the rushing including a 74 yard TD run by Schreiner in the 2nd quarter.

Tumwater (3-1, 1-0 2A-EVCO) head coach Bill Beattie praised the play of his team. “The kids played hard and our defensive just had a fantastic game,” Beattie stated. “We have a lot of work to do to get up to the championship caliber that we want to be at, but we will. We will go back to work. We don’t have a game next week and we have two weeks to get healthy and we will be back at it.”

WF West (2-2, 0-1 2A-EVCO) head coach Dan Hill liked the fight of his team. “I am so proud of our defense and offensive battle,” Hill remarked. “We shot ourselves in the foot the first half but we came out in the second half and played hard, battled and moved the ball up and down the field. I love the play and heart of my team. They love Bearcat football. They are a pleasure to be around and to coach.”