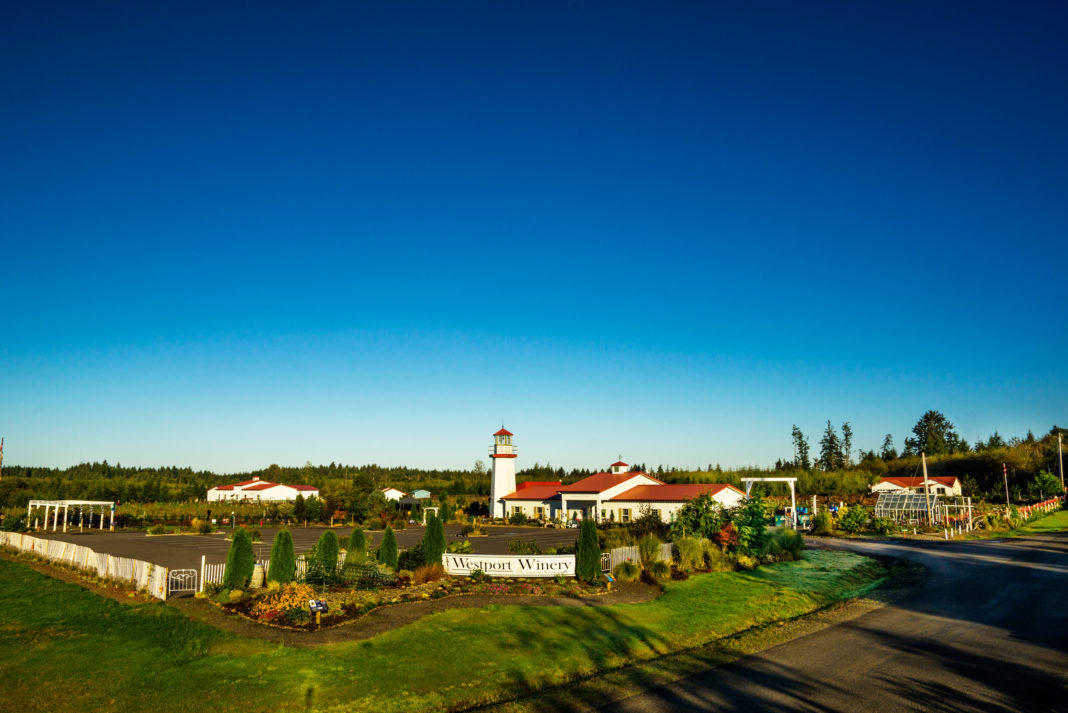 Westport Winery earned multiple awards at the 2018 Wine Press Northwest Platinum Competition. Only northwest wines that have earned gold and double gold medals in one of fifty professionally judged events throughout the year are invited to enter. According to the publication, “If all judges on a panel deem the wine a Platinum, that wine is awarded a rare, unanimous Double Platinum.”

Dawn Patrol, a raspberry Riesling blend, earned the prestigious double platinum medal. A portion of the proceeds from this wine benefits the Twin Harbors Chapter of the Rocky Mountain Elk Foundation. The sculpture commemorating this wine was created by Tokeland artist Jeffro Uitto. A new watercolor label has been painted by artist Darryl Easter for next year’s vintage.

Shiver Me Timbers, a blend of Riesling with passionfruit, orange and guava (POG) received a platinum award. This wine’s label features a photograph of Lahaina Harbor by photographer Randy Miller. The sculpture commemorating this wine was designed by Aberdeen welder Mike Peterson. A portion of the proceeds from this delectable beverage benefits Grays Harbor Habitat For Humanity.

The winery’s most decorated selection, Rapture of the Deep, a sparkling cranberry wine, garnered a double gold medal. The label features an underwater photograph of a Hawaiian octopus by winery co-founder Blain Roberts from his days as the owner of Lahaina Divers on Maui. The sculpture for this wine is located in the Something Blue Garden under the living roof. It is an intricate glass jellyfish hand-blown by Johnny and Darlene Camp of Opal Art Glass in Cosmopolis. The Camps also craft all of the winery’s lighthouse and float bottles. This wine benefits Harbors Home Health & Hospice.

Both Peaches on the Beach and Ancient Mariner earned gold medals. The first is a blend of Riesling with peach. The second is Riesling and pear. All of these Riesling based wines were crafted from grapes grown at Mike and Karen Sauer’s Red Willow Vineyard in the Yakima Valley AVA.

These results were announced in the winter issue of Wine Press Northwest. The magazine also published its all-time platinum reader board. Westport Winery is the 11th most platinum awarded winery in the northwest which is significant accomplishment for its ten-year history.

In 2016 Westport Winery was honored as one of the top twenty most-admired wineries in North America by Winery & Vineyard Management Magazine. The business earned Best Winery, Best Wine Shop, and Best Boutique Winery for 2016 by South Sound Magazine. They received the Grays Harbor Environmental Stewardship Award in 2015. They are finalist to the Best Washington Family Business competition by Seattle Business Magazine. And in 2011 they garnered Washington Winery to Watch by Wine Press Northwest.

In Oregon, Westport Winery Seaside is open daily from 11:00 a.m. to 6:00 p.m. Family-friendly Westport Winery Garden Resort is located on the corner of Highway 105 and South Arbor Road halfway between Aberdeen and Westport. The Sea Glass Grill at the resort is open daily for brunch, lunch, and dinner from 8:00 a.m. to 7:00 p.m. and until 8:00 p.m. on Friday and Saturday. For more information or reservations call 360-648-2224.