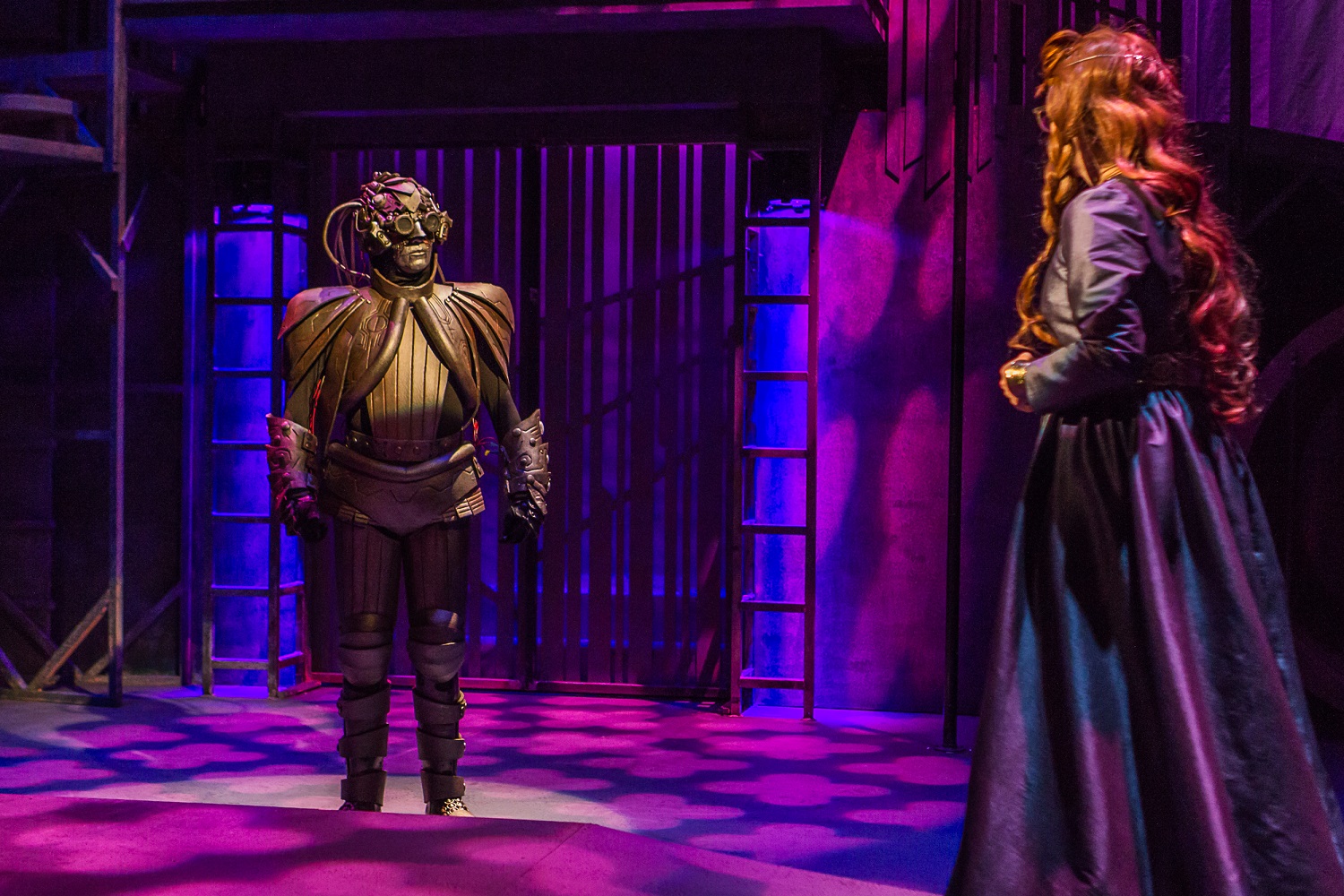 As creative a writer and theatre artist as he was, William Shakespeare could never have imagined all the different forms his collection of plays would take. Since their creation in Elizabethan England, Shakespeare’s works have been translated into over 80 languages and adapted to countless cultural contexts, including Broadway musicals and many popular movies.

One such adaptation that could not have been foreseen is a fantastic production of his lesser-known masterpiece, Cymbeline, right here in Olympia at Harlequin Productions. What makes this production stand out? Well, rather than being set in Ancient Celtic Britain as originally written, this production is set many hundreds of years in the future, in a post-apocalyptic civilization. In fact, the setting is so far in the future that one of the characters is a vintage robot, leftover from a bygone age of highly advanced technology. Surely, Shakespeare couldn’t have imagined that one of his characters would be portrayed as mechanical artificial intelligence, right?

Pisanio the robot is a collaboration between director Scot Whitney’s vision and costume designer Monique Anderson’s creative genius and artistry. The costume for this year’s Cymbeline production (opening October 5, 2017 at the State Theater in Olympia) is a re-creation of the robot that Anderson built for the same play in 1995.

Anderson costumed the entire cast of Harlequin’s production of Cymbeline in 1995, which she remembers fondly as her first full design project for Harlequin. Back then, she ran with Scot’s post-apocalyptic vision and brought in her own ideas of combining historic and romantic styles with futuristic elements. It wasn’t a known concept at the time, but looking back, she defines her costume choices as definitely “steampunk-ish.”

“I was influenced a bit by the sci-fi series of Beserker stories by Fred Saberhagen, but this concept and style was happening in a lot of different places at the same time. There was Mad Max, Star Trek, the Beserkers, and eventually steampunk. I wouldn’t say they were influences, but there seems to be waves of ideas where people come up with the same thing independently of each other.”

Seeing the Pisanio costume for myself, I would whole-heartedly agree with all the above comparisons. As a Star Trek: The Next Generation fan, the android character Data is who first came to mind when I heard about this character. But after seeing the costume, I would have to agree that it is certainly more Borg-like, looking much more machine than human.

So what about the costume has changed since its first iteration in 1995? In addition to some decorative detail changes to better complement the other costumes designed by Jocelyn Fowler, Anderson credits the booming cosplay culture for making available more efficient and effective materials, including the use of LED lights. This time around, Anderson has 20+ years of experience under her belt, plus an assistant and technical specialist, Jacob Ranger, to expertly design an LED display throughout the costume. “The idea is to have several different parts of the robot light up,” Ranger explains.

Despite the machine-like look of the costume, robot Pisanio is brought to life by a human—the very talented actor Christian Doyle. With the use of makeup and a skin-tight black suit, the team strives to erase as much of Doyle’s humanness as possible, so that the costume pieces look like they’re sitting on an inhuman skeleton.

[To see Doyle transform into robot Pisanio, check out this video at HarlequinProductions.org.]

The story of Cymbeline centers around the forbidden marriage of Princess Imogen and an adopted orphan, Posthumus. Posthumus’s trusted servant, Pisanio, in this case his robot, is a major factor in driving forward the plot, which is a journey through love, jealousy, betrayal, courage, repentance, and redemption.

“Pisanio is the most ultimately loyal guy,” explains Doyle. “He is the Alfred to Posthumus’s Batman. He will do anything for his master, and always follows the intent of his orders if not always to the exact letter. He is programmed for loyalty, but he has emotions, too, if toned down a bit.”

But how does Doyle take on the challenge of playing an artificially intelligent servant? “The costume really informs the character, in the fact that my mobility is limited. The character choices are really limited by and informed by the costume,” Doyle says.

I guess we’ll just have to see for ourselves how this robotic character fits into the Shakespearean fairy tale romantic adventure of Cymbeline. You can book your tickets now by calling the Box Office at 360-786-0151 or stop by at 202 4th Ave. E in downtown Olympia. For more information and to subscribe for the 2018 season, and visit the Harlequin Productions website.

Port of Olympia Invites Community to Vote on Legacy Project