Home LocalTalk Tug of the Month: History of the Sand Man 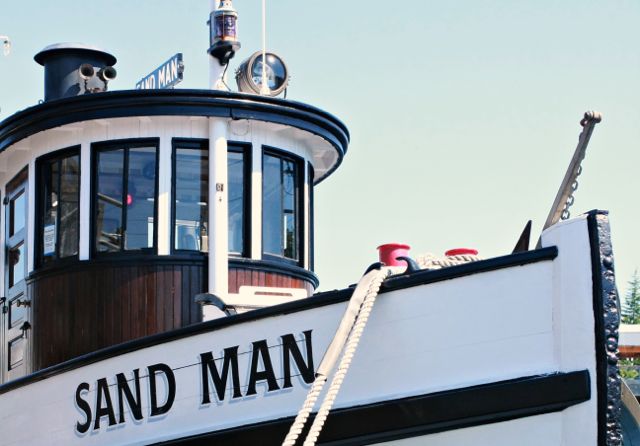 In 1910, Sand Man was built at Crawford and Reid Shipyard, Tacoma, one of the premier ship builders among the many yards on Puget Sound. Arthur Weston, owner of Olympia Sand and Gravel Company, ordered the tug built in 1908. Weston provided essential construction materials by barge to Olympia and other South Sound sites from a rich deposit just north of Steilacoom.  Sand Man towed these barges exclusively until her duties were expanded in the early 1920s to include towing log rafts and barges heaping with oysters.

Sand Man was first powered by a 50 horsepower “Frisco Standard” gas fed engine and a powerful 54” screw or propeller.  When her loads increased in the 1920s, her engine was replaced by a 100 horsepower “Fairbanks-Morse” marine diesel. Her lines were not those of a conventional tug, with low freeboard aft for ease in line handling and the crew jumping back and forth from tug to log raft. Rather, she resembled a Whitehall pulling boat with graceful lines and higher freeboard aft. Nonetheless, she successfully towed for most of a century.

The story is told that Weston lost all his boats except Sand Man in a card game, and, financially distressed, sold her in 1926 to Delta V. Smyth, Olympia tug fleet owner. Smyth’s seven boats were known as Capital City Towing, and sometimes, as the Smyth Tug and Barge Company. His fleet included the 1906 tug Parthia, still towing, and winner of the 2016 Harbor Tug race at Olympia Harbor Days.  Smyth also owned the Audrey, converted from a freight and passenger “Mosquito Fleet” steamer to a towboat.  The Smyth family, Delta’s son Wayne and grand daughter Sarah Smyth-McIntosh, are still integral players in the 44-year old Olympia Harbor Days Festival and Tug Races, originated by South Sound Maritime Heritage Association, and now sponsored by Olympia Kiwanis. It is the only such event left on the West Coast.

In 1944, Sand Man was fitted with her present engine, a 100 horsepower six-cylinder Caterpillar Diesel. In the 1950s the need for tugs in South Sound diminished, and Smyth sold most of his fleet to Foss. Sand Man he sold in 1953 to an Olympia man, Fred Chadwick, who in 1964 sold her to Franz Schlottmann who operated her until 1985, when Schlottmann retired himself and the tug.

In 1987, Bob Powell of Olympia bought her, intending to convert the tug to an historic vessel. He and friend Paul Deranleau found her restoration a daunting task, as the tug had deteriorated badly. Soon, they formed the Sand Man Foundation, and began fundraising efforts. Against all odds, they secured the approval of Thurston County staff, who aided in an application for a Washington State Department of Transportation grant, and in 1999, she received a $300,000 grant. She sank twice on her way to Port Townsend for dry-docking, was raised, refitted, and spent eight years in attendance at maritime festivals throughout the Northwest.

Since then, she has periodically struggled to keep her engine running consistently, and at present is secured to the dock at Percival Landing, unable to move. She is the official City of Olympia historic vessel, offering free on-board tours of the tug in return for docking fees. Her Foundation board and staff are determined to bring her into operation once again, a phoenix-like rise she’s accomplished more than once. More information can be found at www.tugsandman.org.

Her image has appeared as logo tug for the 1983 Harbor Days Festival and Vintage Tug Races, designed and painted by noted Olympia maritime artist Karla Fowler.

Tug of the Month is sponsored by Olympia Harbor Days Tugboat

Races and Festival, presented by the Olympia Kiwanis Club. The free community event takes place every Labor Day weekend on the Olympia waterfront.  It is in its 44th year.  For attendance information see www.HarborDays.com or on Facebook @OlympiaHarborDays.  Questions to the Executive Director at info@HarborDays.com.

Les is president of South Sound Maritime Heritage Association, and has written a number of maritime histories and novels of the American Civil War at sea.  He lectures frequently ashore and afloat, and narrates the Harbor Days races each year.  For more information see EldridgeSeaSaga.com.