Home Everyday A Walk around Olympia with Calypso the Parrot 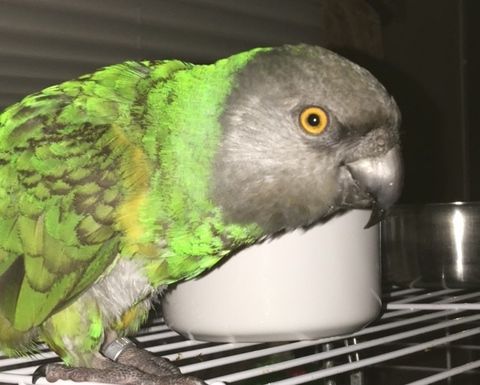 “We hear that all the time when we are walking,” says the woman who is carrying a small cage containing a bright green bird. “We always take Calypso with us on our walks. She loves it here at Frye Cove Park. She likes to see the ducks and other birds.”

Calypso is a Senegal parrot. After a short conversation, her owners, Kathy and Terry Raettig, agree to meet me in a few weeks at Capitol Lake to walk and talk. I am curious to learn more about this couple and their bird.

On the appointed day, we meet. It is a semi cloudy day. Kathy is holding a modified gerbil cage with Calypso inside. The parrot is making a repetitive chirp. As we walk around the lake, Sammy, their Jack Russel Terrier, walks calmly beside Terry. Usually Calypso interacts with strangers here at Capitol Lake. Today, though, it is kind of empty so I don’t get the chance to see Calypso make small talk with walkers.

“We walk twice a day,” says Kathy. “Sammy needs to walk and Calypso loves to go along. We choose our walks by which ones are sunnier, warmer, or cooler, depending on the weather that day. I made a list of walks that we like. All of them are fantastic,” she adds handing me a paper with the names of the walks written out. “Rotary Park on West Bay is a good one for when it is not so nice and when the ships are in.”

She tells me how they got interested in parrots. “We never thought of having a bird, but we had a friend who had a budgie. When she was moving, she asked us to take her bird. When the budgie died we decided we would like another bird. We read about parrots and visited pet stores. There was a place in Tacoma that raised Senegal parrots and treated their birds really well. We visited twice to try to get to know Calypso. We liked her size and that she was quite tame. Senegals are a bit quieter than other parrots. Calypso seemed so happy sitting and preening.”

Calypso was a baby when adopted by Kathy and Terry.  She is now 18-years-old. “The first couple of summers we had her wings clipped because they had done that at the store. Her wings would grow out in the winter and she would fly around the house. Her life was so much richer, so we stopped clipping her wings,” they say.

Calypso lives in a cage situated between the couple’s kitchen and family room.  “She can climb up on a maple stick we have inside the house for a perch, or sit in the window and look at the birds in the backyard. She especially likes our clothes rack when we have it up, and also sitting on top of our china cabinet,” explains Kathy.

“She is not flying around all the time, but she goes from perch to perch. She goes to the cage when she sees her food. One of her favorite foods is sesame seeds. When it was time to go today, she was in her big cage eating. I just held up this little cage and she climbed right in.”

Terry adds with a smile, “Calypso learns something new almost every day. One time I was driving and Calypso was in her cage. A car pulled out in front of me and I had to brake hard. Calypso made a loud squawk. Kathy and I laughed out loud with surprise. The next time I braked,” continues Terry, “Calypso make that same loud squawk. She does it every time I use the break now. We think she wants to make us laugh again.”

“She is a smart bird,” Kathy tells me. “Sometimes before we leave for a walk we ask her if she wants to go see the ducks. And Calypso will say, ‘quack, quack, quack.’”

Calypso has also learned to make squirrel sounds. “We were at Priest Point Park, and it was a cold day. I was sitting in the car with Calypso while Terry took the dog for a walk. I had the window rolled down and a squirrel came running down the tree next to us. It stopped and stared at Calypso, and she stared at it. I would say it was eight to ten minutes they stared at each other. I was holding the birdcage up to the window and they just stared at each other. Then the squirrel made a chattering noise and ran up the tree. I said ‘squirrel, squirrel’. After that Calypso would climb up in her perch and look out at the squirrels in our yard. We say look at the squirrel and she makes their sound. We are excited because she seems very aware of her environment.”

Frequently Calypso will mimic a bird sound she hears or repeat a word someone says. Sometimes she makes the call of the red-winged blackbird, or the Steller’s jay. She says words after hearing them only once, but does not necessarily repeat the words or sounds the next day.

“We used to board Calypso at the shop where we purchased her,” Kathy comments. “There was an African Grey Parrot that lived at the shop named Bonzo. African Grey’s are amazingly smart. Bonzo would say, ‘Hello Calypso,’ in a deep seductive voice. They were friends. Calypso would get all shy when Bonzo talked to her. The shop owners told us that the two birds talked all the time.”

Terry and Kathy have advice for anyone who is thinking of getting a parrot.

“Read about parrots first. They are very high maintenance, but worth it. They like a lot of interaction. We looked at all different breeds. We were not sure we could handle the larger breeds. Senegal parrots live 24 or 25 years so it is a big commitment.”

Senegal parrots are easily bread and can be found for purchase here in the northwest. In many cases the breeders do not ship birds. Trade, import, and export of all wild caught parrots is illegal.

“Every day Calypso says something unexpected and we are surprised. I was packing to go out of town last week,” explains Kathy. “She flew into the bedroom and saw the suitcase and the clothes set out to pack and she said, ‘Bye, bye.’ That was the first time she said something like that when we weren’t ready to go out the door and obviously leaving.”

Terry, Kathy, Calypso, and Sammy walked at Yauger Park earlier this morning and plan to walk around their neighborhood for their afternoon walk. All their neighbors call out a “hello” to Calypso. You might be pleasantly surprised to meet Calypso, Sammy the dog, and their humans any day at one of the local walking trails and parks.