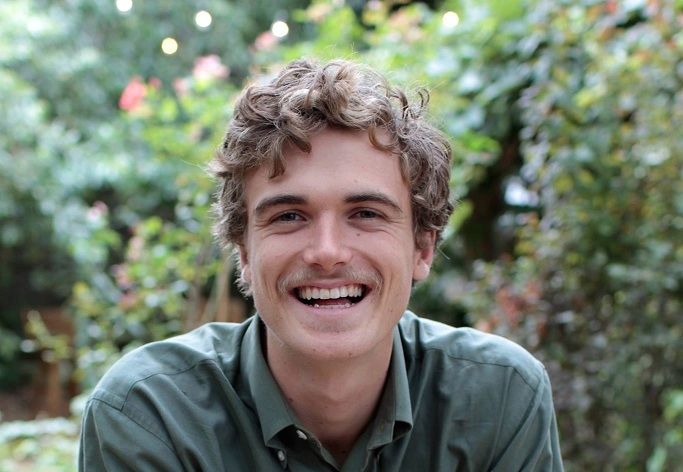 Daniel Cherniske tries not to get bogged down in the problems of the world. As a teenager he spent a lot of time reading articles about world issues ranging from environmental degradation to social injustice. “I spent my teenage years rather depressed about the state of the world,” he shares. Being an informed citizen was at times overwhelming, he says, so he decided to take action. He wanted to help people connect to their food and to “live lightly on the earth.” He started Symbiotic Cycles, an aquaponics education, design, and installation system.

“I’ve found that so many of our current day problems come from both a disconnection from ourselves as part of the environment and how we grow our food,” he says. Daniel explains that he really wanted to promote people being involved in their own food production, but he also realized that not everyone has access to healthy land, or has the time to devote to food production. “So I was looking for something that could be adaptable, both produce a lot of food, in a multitude of environments, while not degrading soil and being able to grow food in areas without soil. Aquaponics is versatile, systems can be installed anywhere from a rooftop skyscraper to a slum.”

“Aquaponics is the combination of fish production, and soilless plant production, or hydroponics. In the collaboration between fish, plants, and bacteria, you’re able to provide an environment where fish and plants and bacteria are getting the ecosystem services that they need to survive and thrive. And you are able to be a part of that ecosystem and receive nutrients from them as well,” Daniel explains.

Daniel is a recent graduate of The Evergreen State College, where he received college credit for the projects he worked on personally and within his business and his real world experience. He studied Food Systems Design with a focus on Aquaponics and was the Lead Educator and Project Manager for the Evergreen Aquaponics Program for three years. He originally met business partner Nick Naselli at Evergreen, and they later reconnected and discovered that they were both working on aquaponics projects. Daniel travelled to Panama and Nick joined him to work on a project there.

In Panama, Daniel and Nick realized that they worked well together and they returned to the states with the intention of starting a business. Daniel enrolled in Enterprise for Equity, a series of small business classes for low-income business owners. After developing business skills Daniel and Nick launched Symbiotic Cycles. They are currently working on several projects in Olympia, including a demonstration system and learning hub at Eastside Urban Farm & Garden.

Daniel also is a consultant for Sustainability in Prisons, installing aquaponics systems in Washington State Correctional Facilities and teaching a variety of workshops for prisoners. He is currently working on a pilot project at Stafford Creek Corrections Center in Aberdeen teaching inmates to grow emergent vegetation for wetland restoration and also consults on design changes for the small aquaponics demonstration project at Cedar Creek Corrections Center near Littlerock.

Prison food does not have a reputation for being appetizing, and Daniel says that in the prisons “any fresh food is so celebrated and quite beneficial to health. The education that Sustainability in Prisons provides is where the work of criminal justice reform is happening. While people are in prison, giving them inspiration, empowering them with knowledge, being able to support their dreams and being able to further their dreams and their education, decreases recidivism. Without that inspiration we won’t fully see prisons be transformed into spaces for true rehabilitation.”

Daniel explains that Symbiotic Cycles wants to make aquaponics accessible for the community. “A huge mission of our business is to be able to provide our services to low income people and community groups, and Thurston County has a bunch of great organizations that are very partner-able.” Symbiotic Cycles accomplishes this mission by teaching workshops with GRuB and other community organizations. They welcome inquires from school and church groups and other organizations who would like to learn more about aquaponics.

They also utilize what Daniel calls a work-party model, inviting community members and clients to help with installation and maintenance, and in turn gaining hands-on experience and knowledge. “A lot of aquaponics workshops are very expensive. A lot of people cannot pay $1,300 for a weekend workshop, but they can absolutely spend a weekend helping a system be installed and learn that way.”

Symbiotic Cycles offers a variety of products, from designing a system and providing customized building plans, to designing, building and offering continuing consultation on their systems. “We’re passionate about working with people. We’re not interested in just setting up a system without interacting with the client, giving them a bill, and leaving. We’re deeply, deeply imbedded within the community, and in that way we can significantly enrich the process of designing and installing a system,” Daniel explains.

Daniel has accomplished a lot, and he says he wouldn’t have been able to do it on his own. “I have so much gratitude for the support of my friends, my family and my community,” says Daniel. “I’m so privileged and grateful and will never ever take the help that I have received for granted. It’s very difficult to start a business and I would not be able to do it without the support that I have received.

“I love Olympia. I wouldn’t want to move anywhere else in the entire world,” he says in summary.

Experience Olympia & Beyond Announces the Recipients of the 2020 Thurston...