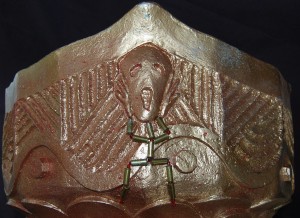 Two staff members associated with the Longhouse Education and Cultural Center at The Evergreen State College have won awards in the Tenth Annual In The Spirit: Contemporary Native Arts Market and Festival, a regional juried show celebrating Native American arts and artists.

The festival, which will be held August 8 at the Washington State History Museum in Tacoma, features pieces by Linley Logan, director of Evergreen’s Northwest Heritage program and Erin Genia, the Longhouse’s program coordinator and a two-time Evergreen graduate. Linley won the Innovation award, for his vessel entitled MANInfestation, and Genia won Best of Show, also for a vessel, entitled Open Pit Gold Mine Vessel.

Logan’s piece, a 24 inch high and 22 inch wide vessel shaped at once like a mutated fish and a bomb, is made from cardboard, plaster of paris, gauze, bullet shells and paper pulp, and took four years to complete, in part because desired thickness and hollow walls posed a challenge. (Linley applied his Industrial Design background to achieve his goal.) Miniature replicas of Edvard Munch’s The Scream adorn the four corners of the piece. “The Scream itself was based on a Peruvian mummy that Munch had seen,” said Logan. “So, I am culturally re-appropriating it back to its indigenous roots.” The piece is painted gold, to represent idol worship, and its themes cover war, climate change and industrialization.

Genia had traveled extensively and was on her way to a gathering of indigenous artists in New Zealand when she saw pit mines in the landscape below the plane. “I wanted to reflect the similarities between the indigenous experiences of the Pacific Northwest and New Zealand. The extraction of resources is something we’re dealing with across the globe,” she said.

She created the vessel at the gathering through a Raku firing technique for pottery, but it broke in her suitcase on the way home.  Undeterred, she put the piece back together using a Japanese technique known as Kintsugi, in which gold is painted along the crack lines. “The philosophy is that it’s more beautiful after being broken,” said Genia, “but it also reminds us that gold extraction is very harmful to the planet.”

The In The Spirit Festival, August 8, involves a day of dancing, drumming, singing, and shopping with a diverse group of Native American artists. The museum plaza will be filled with vendors selling artwork in all price ranges and all exhibits are free to the public that day. The In the Spirit Exhibit runs until August 30.

The Evergreen Longhouse, which celebrates its 20th anniversary this year, is the first of its kind on an American college campus and is known locally, regionally, nationally and throughout the Pacific Rim, as an educational and artistic hub for Native American culture and voices.